'The Big Four banks (and Macquarie) could weather the Morrison levy easily. However, it is an opportunistic and inappropriate means of tackling the big bank profit harvesting regime.'

THE COALITION'S 2017 Budget has unexpectedly proposed a levy on the liabilities of Australia’s biggest banks — the Big Four, plus Macquarie Bank.

Who will pay the levy? Customers, or shareholders, or employees?

'… there is an overwhelming view among investors and analysts that the banks will pass on the cost of the levy to customers rather than cut dividends.'

The presumption is that customers will wear it. That investors and analysts can be so sure highlights a practice and a structure well embedded.

Let us examine the return on equity of the Big Four banks: 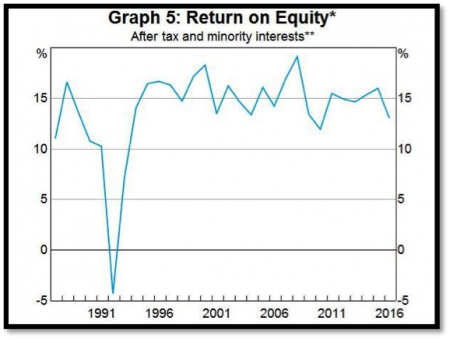 As the RBA notes:

'The major banks’ return on equity has averaged around 15% over the past two decades.'

The typical business, large or small, would die for these returns. Moreover, behind this relatively steady profit rate, the combined profit mass has escalated dramatically from the early 1990s.

Is this remarkable record serendipitous? It is much more likely a product of market power.

This inference gains weight with a selective comparison of bank profit rates and concentration rates globally. Return on equity for large banks is high and relatively stable in Canada as well as in Australia. More than coincidentally, bank concentration in Canada and Australia is among the highest in the world. 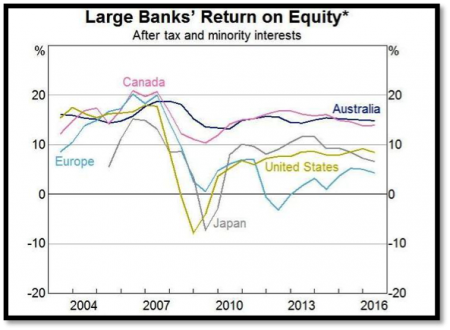 In the U.S. during the 1930s Depression, some economists noted a pronounced bipolarity in the sectoral response to depressed market conditions.

The economists studying this phenomenon have been generally included in the loose category of "institutionalist economists" — predominantly an American grouping. A significant number found favour and office in the Roosevelt "New Deal" administration. Most notable, in this context, was Gardiner Means.

Thus was coined the term "administered pricing" to characterise the empirical evidence from the bipolarity. The aim is to price strategically for the attainment of a hoped-for rate of return, or profit mass. Demand is a subsidiary consideration, but the equally strategic long-term acquisition of market power is the means by which demand can be rendered inelastic.

The concept and market power in the U.S. economy, in general, gained broader public exposure with the establishment of the Temporary National Economic Committee in 1938 (until 1941) and through its subsequent publications.

One notes the recent price hike of the Opal card use by the NSW Government on the grounds that it is “needed to offset a decline in revenue”. The service is provided by a monopoly – perfect – and the move is a reflection of administered pricing par excellence.

Convention has it that the concept was first conceived by the chemical industry giant Du Pont. Du Pont was then a significant shareholder in General Motors (GM) which, victim of a slump after World War I, required reconstruction for its salvation. GM was a key company to which the strategy of administered pricing was first applied.

The concept has been notably applied in an analysis of the U.S. steel industry. Though numerous firms were in operation, the industry was dominated by U.S. Steel, which dictated industry-wide terms as a price leader. The industry’s structure and practices received close scrutiny in Gardiner Means’ 1962 Pricing Power and the Public Interest.

After 1945, both the institutionalist economics fraternity and their concept of administered pricing fell off the radar in the U.S. The reasons were methodological and ideological — not unrelated. Neoclassical economics, with its seemingly greater elegance and its message of competition resplendent, experienced a resurgence. Politically, big business regained influence after its relegation in the 1930s to the doghouse.

Some economists sought to find behind inflationary pressures a cost push influence of wages and labour conditions. The context was a relatively novel environment of greater workplace unionisation, industrial unions having gained belated legitimacy under the 1935 Wagner Act.

The explanation of inflationary pressures that eventually gained dominant approval within academia and officialdom was that inflation was 'always and everywhere a monetary phenomenon'. Proselytised by the indefatigable Milton Friedman, "monetarism" became official wisdom for a period until it sunk unacknowledged into oblivion sometime during the 1980s. Wages push (via NAIRU, the ‘non-accelerating inflation rate of unemployment’) remains de facto a key culprit of inflation for officialdom.

Stagflation, that phenomenon of the dying days of the post-War long boom, was attended by much intellectual wringing of hands. The institutionalist economists had a ready explanation for it in administered pricing. John Blair, long-time antitrust official, encapsulated the argument and the evidence in his door-stopping 1972 Economic Concentration; structure, behaviour and public policy. But drawing attention to the anti-social implications of market power remained politically unpalatable.

Thus when we are told that the banks will readily pass on the Morrison levy to customers, we are ill-equipped to confront the nature of the beast. The graph of the Big Four’s return on equity since the debacle of "recession we had to have" (for which the Big Four banks themselves were heavily responsible) tells it all in one glance.

Treasurer Paul Keating allowing in 16 foreign banks to the Australian market, in 1985, did nothing for retail or general business banking because of the cost inhibitions to replicating the branch network (coupled with the new cost of rolling out an ATM network).

The Trade Practices Commission/Australian Competition & Consumer Commission, under successive chairmen, dutifully facilitated the enhanced concentration of the banking sector (indeed of the financial sector in general) that we enjoy today. The Trade Practices Act’s merger provision Section 50 proved to be no impediment to this long-term acquiescence to the gospel of market "contestability".

A complementary exposure of the scale of financial sector profits can be had from the National Accounts (ABS 5206.0, Table 7). Over the 18 months to December 2016, financial sector income, constituted 24% of total corporate income and over 17% of total business income. The figures for 1980-81, when the 'Campbell Report' ushered in comprehensive deregulation of the finance sector, were 5.1% and 3%, respectively.

There is good reason for some increase in the financial sector quotient in national income (administration of the growing retirement regime and so on). But the percentages reached to date verge on the obscene. There is a parasitism at work and market power of the Big Four is at the centre of it.

Apart from the de facto cartel that operates in the matter of pricing, the Big Four operate a de facto cartel in their treatment of retail and small business/farmer customers, where the abuse of power reigns supreme.

It is true that many superannuation portfolios and retirees rely on rich bank dividends. This reliance doesn’t make the extent of those receipts any more legitimate.

The Big Four banks (and Macquarie) could weather the Morrison levy easily. However, it is an opportunistic and inappropriate means of tackling the big bank profit harvesting regime.