Rulz is rulz — whether you're Joe Blow, Jill Dill or PM Tony Abbott

Muddle-headed desk jockeys out there in media-land ranting about "birthers" are missing the point. Tony Abbott's refusal to comply with an FOI request is about respecting the LAW, says a cranky Noely Neate.

I HAVE NOT paid a lot of attention to the call for PM Tony Abbott to declare when he renounced his UK citizenship. You know –  life, going to war – and I won’t even start on how many aspects of the budget have absorbed my attention, so this one has sort of passed me by, until today that is.

A bloke called Grant Wyeth has written an article in The Drum entitled 'The 'birther' barrier is holding Parliament back'.

If he thought his high and mighty attitude of “Let's hope this silly undertaking of "gotcha" journalism provides momentum to remove Article 44(i) from our laws” would make this “ridiculous” (his word not mine) campaign go away, he is sorely mistaken.

Instead, it actually made me look into it further and I say "Rulz is Rulz Mr Abbott".

For starters, the pompous use of the word “birther” by this writer and other journalists who've trotted it out on Twitter is muddle-headed and off the mark.

“Comparisons with the birthers should be dismissed out of hand as weak analogy.”

(Nothing like a lot of traffic going IA's way to put a few noses out of joint!)

This is nothing like the hysterical rubbish that Barack Obama went through. Hell, those nutters were still trying to say his passport was forged and all sorts of weird stuff after he did address the issue. To compare me and others to the likes of a Palin, or U.S. Fox News' hyperventilating viewers, is just insulting.

Most importantly, no-one is questioning Mr Abbott’s "birth". We all know where he was born. So let's just sheet that silly "birther" term right back to the likes of Mr Wyeth and others who are promoting such ridiculous terminology, not the punters. Or, is lumping those questioning the blocking of the FOI request by the PM's office into "birthers", some kind of childish grudge because "non-mainstream" Independent Australia has been raising this issue?

.@sexenheimer So when did Abbott renounce his British citizenship? Why did Sen Nigel Scullion go to so much trouble? https://t.co/hFjtAqs34Z

​(Listen from 22:15 mark on video about Scullion having to go to London for a RN1 form to revoke UK citizenship 5 days before election)

Mr Wyeth seems to infer that, as we are a multicultural nation, Article 44(i) of the Constitution is no longer required. So the very questioning of the PM renouncing his U.K. citizenship is pretty much a "who cares" drama that we shouldn't bother paying attention to.

Well, Article 44(i) might be outdated. Hell, most of our Constitution is a bit long in the tooth. Just ask members of our Indigenous family. On that I agree, though not necessarily in regard to that particular article.

As someone said to me, what if Mr Abbott had dual citizenship with Iraq? Would that affect what is currently happening at the moment with us rocking in to take on the nasty ISIL extremists? Would the spin be different maybe? Would we as a nation be questioning his motives? Would the media themselves be asking different questions of the PM? 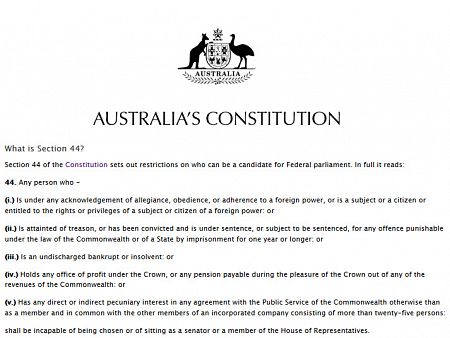 On this issue, the jury is out for me. I know it doesn't fit with certain people's black and white, left v. right beliefs.

BUT, just because you believe that your elected representatives should make their legal responsibility to their electorate and nation a priority, it does not make you a nutter ready to sport a southern cross tattoo and drunkenly start a race riot under the guise of overzealous patriotism.

My issue here upon looking into this campaign is the LAW. There are a shipload of laws that we all think are rather redundant and should probably be tossed off the books. Doesn’t matter. We can still be charged under them an have to abide by them.

Our MPs are not above the law - so why dodge and block the FOI request?

How often have we had to cop examples like a particular MP popping into a school for a flying visit just so they can claim the whole weekend in a resort town to attend a party fundraiser, wedding and/or sporting event courtesy of the taxpayer? We all complain about it, but it is "technically" legal for them to do so.

Therefore, on more than one occasion, we have been told "all travel was undertaken within the parliamentary entitlements rules".

Now, if any laws needed a serious shake-up, it would be the parliamentary entitlements rules. In the private sector, you would get the sack for abusing your expense account to the degree we often see our MPs do.

MPs do not have the right to pick and choose which rules they decide to follow.

Regarding signing this petition, just think: who do you have to lose?  http://t.co/CVkaFk3fGT #auspol #TeamAustralia pic.twitter.com/K5m1aUmnwq

Journalists are always telling us to check the source of our information. Then verify that source independently. They also tell us that they don’t have an opinion, they just report.

Yet it seems that many in the media have "decided" this is a non-issue, without any checking of facts at all. In all likelihood, it is just arrogance from the PM’s office that they feel they are not answerable to punters. Point is, verification is a simple thing to do, isn't it, so why the arrogance?

When you put your hand up to represent your electorate, you sign a legal document with the Australian Electoral Commission (AEC). If you lie on that document, there are legal ramifications, as there should be.

The fact that maybe some of that law is outdated has nothing to do with this issue and is just a distraction. If Mr Abbott formally renounced his dual citizenship with the U.K. High Commission (as I am led to believe is the process for U.K. citizens) prior to 26 March 1994 when he signed his Candidate Nomination Form, then all is good.

There should be no issue showing us the paperwork, huh? I mean, there is a process and it does involve official paperwork, the sort of paperwork you do tend to keep on file.

Instead, an FOI request for this information has been denied.

I don’t know about you but I find this insulting. An Australian citizen should not be denied proof of the legal status of an MP’s citizenship. There is no good reason for it, no security issue or commercial confidence issue.

This FOI denial alone is what keeps this issue alive. This "distraction" can quite easily disappear into the ether by providing a copy of the paperwork renouncing of U.K. citizenship AND a copy of the AEC Candidate Nomination form when Mr Abbot first sought to win a seat in Parliament.

@davrosz @YaThinkN An excellent article & worth a read & R/T. The particular section of the 'Constitution' shld remain. Break it, Gaol time!

I am starting to think that when Mr Abbott promised us a “grown up” government, instead of "responsible adult" government he actually meant he would treat us citizens like children, responding to unwanted scrutiny with that most hated parent refrain, “because I said so...” that will drive a kid to their bedroom in fury and frustration, normally with bonus door slamming.

That is just not good enough. It is not "ridiculous" to want proof and be assured that our Prime Minister – be it this one or any MP in future who aspires to the top job in our nation while Article 44(i) of the Constitution is on the books – is a "law-abiding" citizen who legally deserves to be in the position of Prime Minister of this nation.

I might be only a punter but I try to teach my kids that Rulz is Rulz! — whether you are Joe Blow, Jill Dill or Prime Minister of Australia.

(Author's note: it's bloody hard going but you can read Australia's Constitution here and tell us what YOU think!)

This piece was originally published on yathink.com.au and has been republished with permission. You can follow Meta Cranky Noely on Twitter @yathinkn. 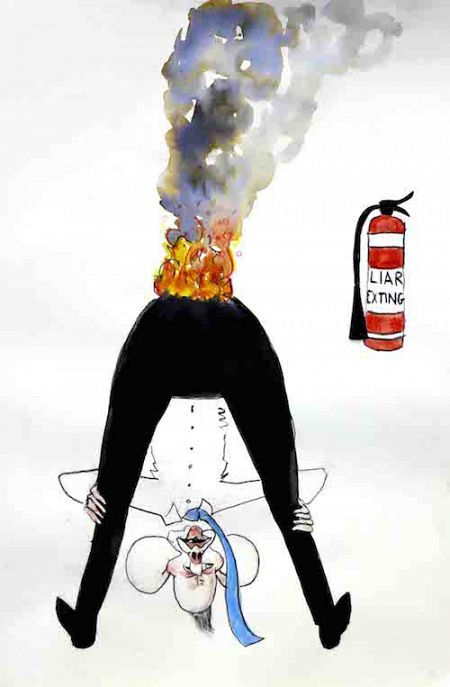