Some Australian police officers have taken unnecessary violence too far as an act of intimidation against protesters, writes Tom Tanuki.

OUTSIDE THE Land Forces Expo in Brisbane this week, a police officer flashed an “okay” hand sign at a protester. We all know by now what this means, so let’s not get caught up in decoding the bleeding obvious yet again. I’d rather we talk about what it effectively does in this context: it acts as a declaration of hostility toward leftist protesters. It goes hand-in-hand with a lot of actual violence; of course, we’ve seen yet more of that at Land Forces. The truth is that the police will always enact the maximum amount of violence that the state’s electorate allows them.

I’ve had the opportunity to see Australian police suppress and brutalise protest actions all along the eastern seaboard over my years of activism. I’ve tasted excessive pepper spray in Melbourne, been issued with a move-on order in Sydney simply for existing with opinions and watched oddly puritan cops in Brisbane arrest people for swearing. I’ve seen endless police violence toward comrades.

The conclusion I’ve drawn is that Australian police must love it. They love beating, spraying and detaining young protestors whenever they get a chance. At the very least, it’s in their institutional blood, as a suppressive force sent to defend capital. And rarely have I seen cops get more enthused about their hobby than when they’re employed to defend a conference with CEOs at it.

This week, they’ve been defending the Land Forces Expo. At Land Forces, arms dealers come together to shake hands with ministers, the ADF and warmongers from around the world. It’s the civilians of war-torn states who pay a heavy price for handshaking events like this — civilian casualties in war are said to range anywhere from 50 to 90 per cent. Land Forces is pretty grotesque, if you think about it with your “reasonable human being” hat on. So Disrupt Land Forces was organised, in which reasonable human beings committed to using non-violent resistance strategies to try to shut down the event. 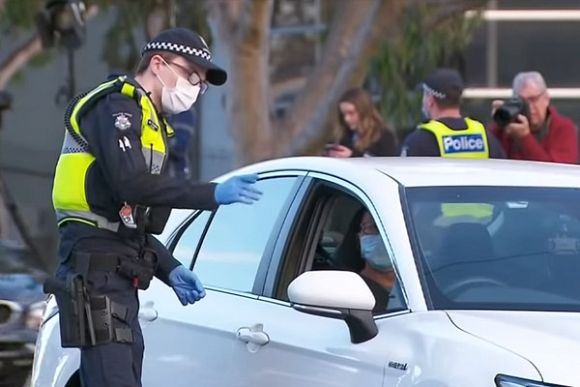 The COVID-19 pandemic has made work for the police force even more difficult and dangerous than before.

At Disrupt Land Forces, there was music, protests and workshops. People stood outside yelling at warmongers on their way in. Some legends got in to the Brisbane Conference and Exhibition Centre, leapt aboard a tank and one locked themselves to it. A hero leapt atop Christopher Pyne’s car as he was on his way inside.

To defend warmongers and CEOs from reasonable human beings with placards, Queensland Police went wild. Knocking people to the ground, hiding their badges, knocking away phones filming them. They shoved a 12-year-old girl around because international arms dealers need protection from a little girl. They’ve also been going wild with the arrests for “public nuisance”, which actually means swearing and loud noise. (Activist legal organisation Action Ready Queensland posted a statement listing further acts of violence by the police.)

Someone was seen being handcuffed and carted off by Queensland Police for yelling the word “dogs”. Someone else said “warlord scum” and got arrested for that. A protester was overheard running through various words with the police to assess their criminality. “Can I say ‘fuck’? ‘Shit’? ‘Cunt’?”  The answer was no to all those words. Too criminal.

These cops aren’t remotely interested in charges that hold up in court. The entire point is to hurt, intimidate and reduce the number of reasonable human beings protesting.

It reminds me of the irrational police response to another disruption: IMARC 2019, the international mining conference in Melbourne. That’s where another copper did the obviously alt-right hand sign to protesters. At IMARC, cops displayed stickers saying ‘eat a dick, hippy’. They trampled a young woman with a police horse. Bashed a woman in the back of the head. Used so much excessive pepper spray on protesters that there is talk of a class action. 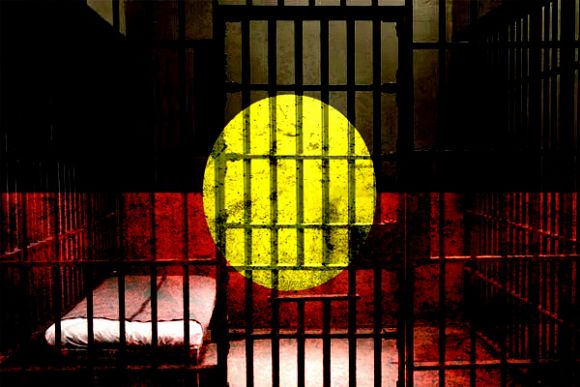 Black deaths in Australia and the United States follow a similar historical pattern of racist institutionalism and disregard for the sanctity of human life.

The violence VicPol are permitted to use is enough to make a Queensland Police officer green with envy. Victorians were lulled into a false sense of security and they sat around for several election cycles electing various governments with an often bipartisan pledge to buff up police resources to combat things like made-up gangs. Now they have Judge Dredd-level militarisation. Anyone who’s stood before a row of 100 Robocops and armoured horses at a Victorian rally can attest to that.

An organiser of Disrupt Land Forces reminded me that in Queensland, after the Bjelke-Petersen era of brutal protest illegalisation and suppression, civil libertarians and other activists fought for and won measures to reduce police violence. The measures still stick, to a degree. Queensland cops are brutal, but they’re not yet allowed to be as brutal. They’ve got less of the kind of military toys you could buy inside Land Forces. They’re no VicPol — yet.

Their intention in suppressing disruptions is broadly to protect the right to freedom of assembly. The way cops see it, if conferences for warmongers or mining parasites are legally registered then they should be allowed to plan to ruin the country freely in private. Fine. But I don’t recall my rights to freedom of assembly being so enthusiastically defended as a protester. My first taste of excessive VicPol pepper spray was in Coburg in May 2016, when neo-Nazis gate-crashed to counter-protest a community event I was attending. What crime had I committed? The crime of assembling while not being Gina Rinehart.

Protesters are simply seen by police as the enemy. They would always like to be more brutal to us. But they often wait until they think they have the license for it. The violence at 2019’s IMARC disruption happened right after Extinction Rebellion’s increasingly unpopular “Spring Rebellion” campaign ended. Police may have felt they had popular license to do what they liked. A comrade who had liaised with police at that disruption was led to believe that the force was given few coherent orders from above. Basically, they’d been let off the chain. 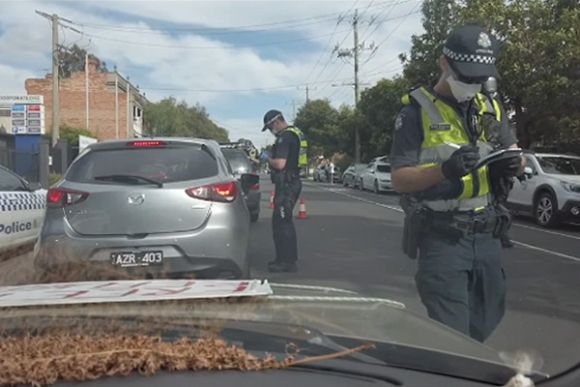 We’ve seen police use COVID-19 restrictions as their license for further violence. I don’t support the anti-lockdown movement, but I’ve seen the violence enacted upon them by police. It proves the same thing: when cops think the public will let them get away with it, they attack with great enthusiasm. Sadly, much of the public will let them. I’ve seen the unsightly cheering people do online whenever people they don’t like get hurt by cops. They boldly assume they won’t be the next target.

About that cop in Brisbane, the one who flashed the hand sign. She was the latest in a long line of police officers to do it. Not just Senior Constable Travis Gray, but also one in NSW who did it at a Black Lives Matter rally. They were all protected by their senior brass, who lied after “investigating” that the officers didn’t understand the political context. That’s garbage, because everyone understands the context now. Brenton Tarrant gave everyone all the context they’d ever need when he flashed that sign in court after the Christchurch massacre.

So we’re long past convincing people about the alt-right background and I’d rather we focus on what these hand signs show. They declare open hostilities. Enmity between police and people in their way. The hand signs happen at the same time as the brutality. It’s police openly declaring their intention: to unleash terrible violence upon protesters.

What we are supposed to do as a population is to decry that violence and limit police power to keep dishing it out. Queensland Police should not be allowed by Queenslanders to beat, arrest and detain reasonable human beings for saying rude words. VicPol should not be allowed by Victorians to bash people and drown them in military-grade pepper spray.  You should never permit this in your state.