Malcolm Roberts: Breaking the laws of physics with each climate denying claim

'Roberts broke basic laws of physics, managed to forget high school science and ignored the properties of the greenhouse gases he claims to have studied while working in the coal industry.' ~ Graham Readfearn, DeSmogBlog

CLIMATE SCIENCE DENIALISTS will often fool people – and sometimes themselves – by cherry-picking the bits of evidence they think fit their argument.

At other times, they’ll construct elaborate conspiracy theories about human-caused climate change being a front for a New World Order, with the United Nations as the Illuminati.

But often, they just get things badly, horribly, terribly and embarrassingly wrong.

Australian Senator Malcolm Roberts, of the far-right One Nation party, had all this and more in his maiden speech to parliament this week. It made it all the way to the UK’s BBC.

“It is clear that climate change is a scam”, said Roberts, before laying down some hardcore sciencey-stuff on Australia’s upper chamber.

He said that “changes in the carbon dioxide level [of the atmosphere] are a result of changes in temperature, not a cause.” This, despite scientists being able to check the chemical signature of carbon dioxide gases that show the extra CO2 comes from the thousands of millions of metric tons of fossil fuels being burned every year.

Roberts tried to boil his whole understanding of atmospheric physics into one neat little paragraph. It went like this:

It is basic. The sun warms the earth's surface. The surface, by contact, warms the moving, circulating atmosphere. That means the atmosphere cools the surface. How then can the atmosphere warm it? It cannot. That is why their computer models are wrong. The UN's claim is absurd. Instead of science, activists invoke morality, imply natural weather events are unusual, appeal to authority and use name-calling, ridicule and emotion. They avoid discussing facts and rely on pictures of cute smiling dolphins. These are not evidence of human effect on climate.

Now, I haven’t asked all of them but I’m pretty confident that no climate scientist has ever used a picture of a dolphin – even a cute, smiling one – as “evidence of human effect on climate”. I might be wrong though.

“Like Socrates, I love asking questions to get to the truth.”

So, in the spirit of Greek philosophy (or something) I asked some climate scientists about Roberts’ statement on the “circulating atmosphere” and how it “can’t warm” the planet. And when I say I asked them, I mean I wasted their valuable time.

Where do you start? This denies that the atmosphere has any heat storage capacity, or that greenhouse gases re-radiate heat back down to the Earth.

This really is high school geography that Malcolm Roberts has messed up here. We have known about the greenhouse effect since about the middle of the 19th century.

We have directly measured warming of the oceans, for example, where about 90 per cent of the human-caused heat has gone. You can measure that heat. And we know with absolute certainty that this heat has come from the atmosphere.

Anyone in public office, as a senator speaking about something as important as climate change, should be across these basic facts.

Professor David Karoly, of the University of Melbourne, Australia, said,

Of course, Malcolm Roberts is wrong.

There is a wealth of ‘empirical evidence’ from observations of the surface energy balance at every observing site around the world with relevant instruments and measurements.

Karoly also sent a schematic, derived from this journal paper and published by the UN's Intergovernmental Panel on Climate Change (IPCC), which Roberts hates. While criminally bereft of smiling dolphins, the image shows how greenhouse gases interact with the Earth’s surface. 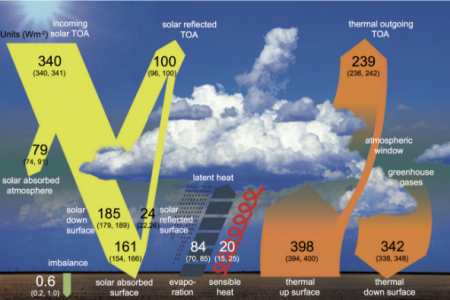 But he told me:

“There is so much wrong in these few sentences that it is almost beyond parody — it turns the Senate Chamber into the theater of the absurd.

Malcolm Roberts broke the first law of thermodynamics, which is the simplest — the conservation of energy — and then broke the rest of them.”

Dr Sarah Perkins-Kirkpatrick, also at the UNSW’s Climate Change Research Center, started with the absolute basics by pointing out to Roberts that the atmosphere is made up of gas.

Then she got a bit technical:

Greenhouse gases which are present in the atmosphere absorb and re-emit particular wavelengths of radiation, under particular conditions. Each GHG [greenhouse gas] absorbs and re-emits certain bands of the long wave radiation coming off the Earth. Yes, some of these re-emitted bands go into space, but some also go back into the atmosphere, thus heating it up. Long wave radiation essentially equals heat. More GHG equals more absorption and re-emitting of long wave bands, and that equals an increase in temperatures.

So, there you have it.

Roberts broke basic laws of physics, managed to forget high school science and ignored the properties of the greenhouse gases he claims to have studied while working in the coal industry.

Apart from that, a pretty good effort!

6 April 2019, 11:00am According to misinformation from sources such as Sky News and scientist Peter Ridd ...