Lining up the leadership and Mal 'Mr Cricket' Brough

Rodney E. Lever suggests how the Government can end the constant media leadership speculation and explains why he won’t be voting for his local LNP candidate Mal Brough.

There is a way for Labor to end the division in its ranks.

It would require Prime Minister Julia Gillard to call a party spill this week and for Kevin Rudd, of his own volition, to call his supporters together and to announce that he and all his supporters will vote for the existing elected prime minister.

Yes! It would surely leave the Opposition gasping for breath! They would have to invent another issue other than pouring taxpayers money from the south into a wild spending spree in northern Australia — a project highly debatable right now when we have so many issues of more essential value.

Great financial powers are desperately trying to retain their traditional media as the real government of this country. Such a "stunt" might well be the only way to reverse the level of power exercised in newspaper, radio and TV duplicity, solely designed to preserve their leverage over government for the foreseeable future.

It would be a character test for Rudd and his supporters.

It would be a character test for the Government.

I was chatting with a young woman of my acquaintance, when she volunteered:

“I could never vote for Julia Gillard.” 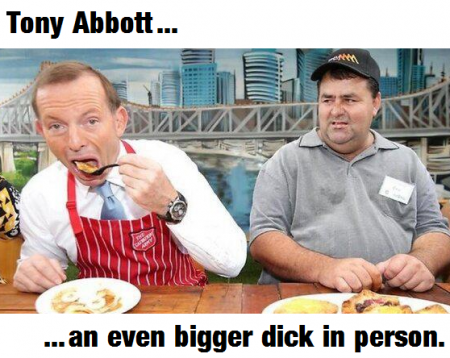 “She is living with a man who is not her husband and they are not married,” she said. “And anyway, I liked Kevin Rudd.”I asked her, “Then you will be voting for Tony Abbott?”

It brought home to me that we journalists often don’t get it when we talk to people.

We forget that none of us are voting for Julia Gillard or Tony Abbott. We forget that when we write our stories we are writing only about the celebrities in politics.

I said to her: “Russell Crowe is going to vote for Julia Gillard.”

There are two more candidates, both non-entities. There is a Katter party candidate and a Palmer candidate. A vote for them, in my opinion, is the equivalent of tearing up your ballot and throwing it away.

I would never vote for Mal Brough.

No one who is aware of Mal Brough’s career as the member for Longman in the last Howard government would vote for him.

No one who has followed his career through his abortive connection with the aboriginal people in the Northern Territory would vote for him.No one who is aware of his deep involvement in the Ashbygate affair ‒ so brilliantly recorded by Independent Australia ‒ would vote for him.

No one who is aware of his cowardly denials of deep involvement in the Gillard “menugate” affair would vote for him.

No one who saw his brutish behaviour at a friendly social cricket match, when he loudly and rudely abused an umpire over a quite legitimate ruling would vote for him. It was certainly not cricket.

So my vote will have to be for the Labor candidate, Bill Gissane. I don’t know Bill Gissane. I have never met him. I know something of his background through Facebook and that is all.

But, on September 14, I will have no other choice.