Harmony Day continues to be a day of harm and tokenism, as Australia has successfully whitewashed the International Day for the Elimination of Racial Discrimination, writes Priyanka Bromhead.

AUSTRALIA HAS successfully whitewashed the International Day for the Elimination of Racial Discrimination.

This "Whitewashing" has resulted in little reflection on the history of the day and how it was formed to remember how police in 1960-apartheid-era South Africa openly fired on and murdered peaceful demonstrators, lobbying against dehumanising “pass laws”.

The Department of Home Affairs’ Harmony Week website paints a picture of belonging and inclusion, which is ironic considering the harsh laws fixed on people seeking asylum – especially those who are melanated – and the massive gaps and disparities between First Nations and non-Indigenous peoples as well as the ongoing attacks on critical race theory. 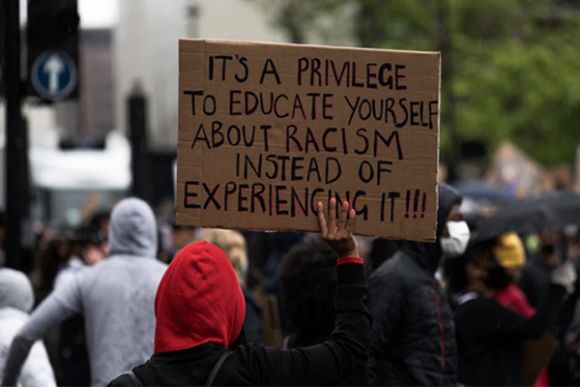 It's hard enough dealing with racist attitudes within our country, but when they come from within one's own family the impact is more painful.

To demand unity, imply belonging and use Black and Brown bodies to cover up a history of aggression against First Nations people and migrants is a violent attempt to sweep “Australia’s” own apartheid era under the rug.

We must not forget that South Africa’s laws were inspired by the White Australia policy and, like Israel, South Africa and Eelam, Australia is complicit in both genocide and apartheid.

A brave Australia would own the murdering of Black folk by police.

A brave Australia would do justice and mercy by implementing policies that put into practice reparations, restitution and restoration of what rightfully belongs to Traditional Custodians.

Until then, Harmony Day continues to be a day of harm and tokenism.

If you are distressed by anything in this article, you can call Lifeline on 13 11 14.

Priyanka Bromhead is the founder of we are the mainstream, an organisation celebrating and advocating for First Nations, women and gender diverse people of colour. You can follow Priyanka on Twitter @WATheMainstream.

20 March 2022, 12:00pm Harmony Day continues to be a day of tokenism, as Australia has whitewashed the ...
Join the conversation
comments powered by Disqus
News updates