... but what of the freedom not to wear the full frontal veil? Contributing editor-at-large Tess Lawrence comments.

And ain't he just lovin' it? Cometh the hour, cometh the lawman.

Who would have thought it possible — least of all Gorgeous George. He is beside himself with puffery, joy and self-congratulation. You can't begrudge the little wombat. Credit where credit is due.

One Nation's Senator Hanson, self-appointed queenie of her own vanity scupperware party, revels in notoriety and media attention and a "look-at-moi" neediness that might well equally apply to many in both houses of what is unquestionably a dysfunctional Federal Parliament.

The Hansonites dabble in the political, racial and environmental occult, its bigotted narrators forever whining in toxic tongues about minorities, specialising in castigation of  "the other".

Its preferred target is Islam and that faith's Muslim adherents.

On Thursday, Senator Hanson's thespian aspirations came to the fore when she indulged yet again in amateur theatrics and wore a full frontal burqa into the Senate, ostensibly to prove a point and to set the scene for a question about banning such face covering.

Here's the video of Pauline Hanson wearing a burqa in the Senate. The reaction of the Liberal senators was mouth open shock. pic.twitter.com/85eh8LW9Iz

The blackface burqa was supposed to shock and awe the Senate. Oh, there were initial gasps and groans when everyone realised it was Hanson but everyone soon settled.

Indeed, Senate colleagues were remarkably unperturbed at the hooded apparition in black. Very soon, they were doing their usual lolling about, yawning, dreaming of their superannuation payout and fantasising about rorting expenses claims.

In what was supposed to be a dramatic flourish, Hanson threw off the burqa to reveal it was she under there. Ta-da! Silly berk in the burqa. She put her lame question to the Attorney-General.

A visibly furious Brandis did not pop his cork. Instead, with great measure, he called out Senator Hanson and gave her a right impassioned bollocking that left the hapless Hanson withering.

Never mind about standing orders. Man George got a deserved ethusiastic standing ovation from the Opposition whilst his truculent and sullen colleagues in the Coalition remained strangely mute and blue-tacked to their seats, although one or two limply clapped.

HANSON NOT EXACTLY SALOME OR CLEOPATRA

No doubt, the Brandisberg concerto against Hanson did not easily sit with the Coalition's usual herdlike discordant narrative that so often demonises Muslims.

Hanson's cultural cross-dressing was not exactly Salome and the Dance of the Seven Veils,

Nor did the fizzer stunt have the heroic seductive grandeur of Shakespeare's Cleopatra, who had herself rolled up in a gorgeous oriental carpet like a human felafel wrap and delivered by Australia Post to the mighty Caesar. And it wasn't even a closing down sale.

When the carpet was unfurled before the Big Guy and the naughty Cleo within it, the course of history was changed and Rome and Egypt became one nation, certainly in a conjugal way.

In fact, Hanson's clumsy stunt, like many of the perils of Pauline backfired — this time because of the Brandis retort.

George Brandis got a standing ovation from Labor and the Greens after calling out Pauline Hanson's burqa stunt as offensive. pic.twitter.com/TmQeWwhmG9

HAD HANSON FALLEN IN LOVE WITH DASTYARI AND REVERTED?

Recalling Senator Hanson's shock last year at discovering that her fellow ABC Q&A panellist, Labor's Sam Dastyari, was born in Iran into a Muslim family, I initially thought she may have fallen in love with Sam and converted to Islam. It happens, you know.

Besides, as far as Islam is concerned, everyone is born a Muslim. That is why the term "revert" is more correctly used when referencing a convert to Islam, in faith terms.

Let us not forget that,for Brandis and the Coalition, Hanson's stunt gave them the opportunity to successfully divert prime attention from an announcement that they knew was pending for later in the day relating to the "birther wars" in our Federal Parliament — no surprise, given we are a nation of majority multicultural immigrants.

Would they be that devious? Yes.

Deputy Leader of the Nationals, Senator Fiona Nash announced she is a British citizen by descent.

Sneakily, the Nash anouncement was the last item of business for the day.

Only a few days ago, Deputy Prime Minister and Nationals Leader Senator Barnaby Joyce received confirmation that he was a New Zealand citizen.

It seems there are daily casualties of dual citizenship falling victim to Section 44(i) of the Constitution relating to citizenship and political eligibility of public office if that person:

This morning, South Australian Senator Nick Xenophon confirmed he is checking to clarify whether he is a British citizen or not.

During yesterday's Estimates hearing, Senator Brandis put up a weak defence to Nash's close of day revelation, his hero status over the Hanson rebuke, fading faster than a winter sunset.

THE BURQA IS NOT AN ISLAMIC IMPERATIVE

Hanson was correct in pointing out that the burqa is not a religious garment.

It is not a Qur'anic imperative, any more than is genital mutilation.

In fact, as I've written about before in Independent Australia, even Kate Middleton's and Kim Kardashian's bridal veils are directly related to the burqa. So is the nun's habit.

WE NEED FREEDOM NOT TO WEAR THE BURQA IN AUSTRALIA

The reality is that the wearing of the burqa is fast becoming a political statement — and certainly not a religious one, in general community terms.

It is on a par with the nonsensical political ploy by extremist Muslims not to stand in Court for the Judge on the religious pretext they stand only for Allah. We are being asked to all rise for the Court — that is for justice, whom the judge represents.

Allah, it needs to be said, is the Arabic word for God. It has no more religious ownership in Islam than God has for Christianity.

Some Australian Muslim women are being forced to wear the burqa by men and fundamentalist imams and other religious leaders. They have no recourse but to obey. It is simply too dangerous for them to refuse. Their own well being – and that of their children – is often at stake. Those who do not capitulate often endure phsyical violence and mental abuse, as well as community derision.

At times, in particular circles, even males are powerless and intimidated into forcing the women and girls in their families and guardianship to wear the burqa.

The full frontal coverage is clearly not popular with the majority of Australian Muslims.

It is indeed more a symbol of male oppression, the possession of women as chattels and of patriarchal domination and authoritarian male rule — common knowledge rarely voiced out loud.

Moreover, in some Muslim circles, wearing a burqa is a sign of "lower class" and being uneducated — or being a servant, slave, even a sex slave and temporary wife, a trafficked woman and/or girl.

It is one thing to wear a burqa when travelling to and fro destinations, but quite another to wear it all the time.

Explainer: Why do Muslim women wear a burka, niqab or hijab?https://t.co/qpBBSPm0m9 pic.twitter.com/G45Ln6fWug

It is not only Muslim women who are forced to wear the burqa, either.

Around the world and not just in the Middle East, women of other faiths who are part of particularly strict conservative households – as well as part of extremist households – are also forced to wear the burqa.

Of course, this is the case in Saudi Arabia, but it can also be the case elsewhere, including in Australia. Non-Muslim maids, nannies, servants, teachers and nurses, aged care aides are often forced to wear the veil.

WOMEN TOO SCARED TO SPEAK UP AGAINST WEARING THE BURQA

"There are women who are risking their lives in places like Afghanistan and Saudi Arabia for their rights, for women's rights, to advance the cause of women's rights — Pauline Hanson does not care about those women."

She is right about women in Afghanistan and Saudi Arabia risking their lives for women's rights.

But why didn't Senator Aly comment on Australian Muslim women who are too terrified to speak up against wearing the burqa.

Like myself, Senator Aly would be only too aware there is a code of silence about the violence and sex abuse endured by Muslim women. We need to break that silence, and we need to protect them and assist them in empowering them to find their own voices.

It is difficult to break such conspiracies of silence. Fear of repercussions, shaming of family and family honour, being accused of not being pious and devout, all weigh heavily upon this vexing community issue.

Never is this more evident than in the historical legacy of the Royal Commission into Institutional Responses to Child Sexual Abuse.

I have sat for hours with Muslim women who feel betrayed and disappointed that the Royal Commission has excluded Islamic institutions from its scrutiny. This remains untenable and heartbreaking.

The independent authority, gravitas and respect for the Royal Commission would have gone a long way to exhuming both historical and contemporary child sexual abuse. But no, we would rather tackle terrorists than this.

Those of us who work within the community know only too well of the need to shine a light on these matters.

A petition on Change.Org needs a mere 154 signatures (at time of writing) to reach its target of 5,000. 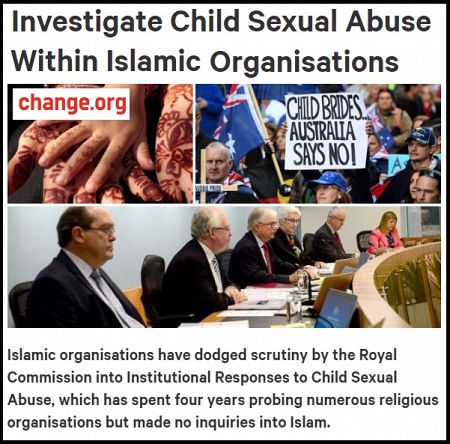 See this petition at Change.Org

The commission, now in its fourth year, has diligently investigated Catholics, Anglicans, Pentecostals, Jewish, Jehovah’s Witnesses and obscure cults — along with sporting groups and the entertainment industry.

But it has published no information on sexual abuses against children within Islam, the third largest religion in Australia, raising questions as to whether the commission, which has proactively investigated even small religious sects, has failed Islamic children.

Lawyer Peter Kelso, who has represented 15 survivors of Christian institutions, recently wrote to the commission asking if it had looked at abuse from within Islam, particularly relating to forced child marriage, female genital mutilation and child sex.

“All groups need to be treated equally and fairly,” said Mr Kelso, who got no answers from the commission but argues it should give a balanced picture of faith-based abuse.

“We know there are underage Muslim girls being pressured into things they don’t want to do. I’m happy to suggest the Royal Commission is deliberately avoiding any investigation into Islamic institutions.

Peter Kelso makes a strong point. And he knows about physical and mental abuse and its insidious impact. When he was only five years old, his mother gave him away and he was made a ward of the state.

It is a pity that Senator Aly, who would undoubtedly be aware of the RC's anomaly, has not seen fit to use her considerable influence to do something about ensuring the Royal Commission heard from victims of abuse from Islamic Institutions.

Like Christianity and the Jewish faith, other religions and we without faith, Islam is not without its hypocrits.

Parliament's and the wider community response to Hanson's blackface burqa stunt is proof positive that some of us are less equal than others and, in this case, Muslim women are the least among the less equal.

We must be more truthful and embrace our sisters to make this change, insh'Allah.