On Tuesday afternoon, Independent MP Tony Windsor spoke in Parliament about why Gina Rinehart is bankrolling Barnaby Joyce, Tony Abbott and the businessman with two names. Is the ferocious battle for New England being powered by CSG? 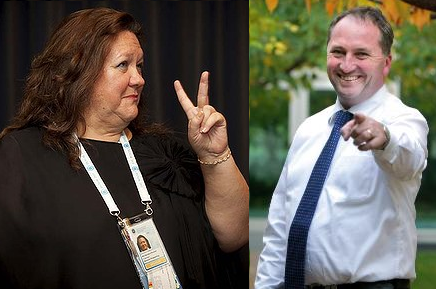 I RISE TO SUPPORT the member for Lyne in relation to the issues that he raised, particularly the dollar per vote for the administration of the major political parties. That is an issue that we should have a very serious look at. Rather than go back through the various issues that have been raised, I support everything that the member for Lyne raised. Political donations are raised in this parliament from time to time. I would like to raise a couple of issues that a number of people who currently reside in the parliament may be able to cast some light on.

The issue I particularly want to raise is associated entities that the major political parties have. If a mining magnate does want to relay money to a particular political party because of some favour that might be granted at some future date, they can do that without being traced through a whole range of funds and associated entities that the major political parties currently have. This is an issue that needs to be explored very closely, because we could be moving towards an American system where money does buy favour and where money does lobby for particular policy changes. We have seen this quite blatantly in recent years in New South Wales with one of the political persuasions, and now the ICAC and others are dealing with some of those issues.

I raise the issue of associated entities again. I do so with some memory of former Independent Peter Andren. Most of us in this place would remember that Peter Andren constantly raised this issue. Even though various members have said that restricting reporting declarations from $12½ thousand to $5,000 would help, there is a whole range of other ways that these major donations can be headed through associated entities and other organisational groups.

I would suggest to Ms Rinehart that she clarify her interest in the seat of New England. Does it have anything to do with coal seam gas on the Liverpool Plains? Does it have something to do with the water trigger, the amendment to the Environmental Protection and Biodiversity Conservation Act that is currently before the Senate? Senator Joyce, who is a candidate in New England, was part of the delaying tactics to prevent that amendment getting through the parliament the week before last. We know that the Senate does not sit again until 17 June. Are any of these things related?

But there is a curious thread through all of this that the person who organised that dinner was a fellow called Greg Maguire. He has two names: Gregory Kenneth and Gregory Kevin. He has 43 companies. He was with the former member for the Northern Tablelands Richard Torbay the day before he resigned. He was a contributor to Richard Torbay, who was to be the candidate for New England. Greg Maguire, in fact, organised that function at Greg Upton’s home.

The Leader of the Opposition needs to explain a couple of things here as to what role Greg Maguire is playing in this campaign. Many would remember ‒ and the member for Gellibrand would well remember because she was the one who referred this matter to the Australian Federal Police many years ago ‒ that this was the same Greg Maguire who was involved with John Anderson and Sandy Macdonald. John Anderson stayed at his motel when Greg Maguire was an intermediary about me in terms of some suggestions that I should, in fact, leave the party. He made some suggestions as to how that could happen.

Now, another strange thing has happened in relation to the seat of New England. That very person, John Anderson, has been associated with Greg Maguire; the Leader of the Opposition has been associated with Greg Maguire not only at that dinner but also staying with him on Hamilton Island some years back. Now John Anderson has come out of the woodpile and is going to head up Senator Joyce’s campaign for the seat of New England.

Mr WINDSOR: I am glad the frontbencher has risen from his sleep. What do all these things have in common? What do Gina Rinehart, John Anderson, Greg Maguire and these other people have in common?

There are a number of issues, but in terms of the seat of New England, I think they have in common the attempts to block the people from having their say in relation to water issues on the Liverpool Plains.

What has happened in the Senate in the last few weeks? Delay tactics were put forward to make sure that the so-called water trigger did not get through the Senate. Hopefully, that will occur on the 17th. I think it is of concern ‒ not only to the people of New England, but also to many others ‒that if money is allowed to buy favour in that regard, and if there is a change of government, all of those things will suddenly disappear. The legislative framework for water and objective science et cetera in terms of the termination of those processes will suddenly disappear. Electoral funding is something we should have a very close look at, and we should be looking at it now.