Gina Rinehart, Fairfax and the "war" politics of the Australian right

What a dream come true for Australia’s right-wingers.

First of all they can point to Gina Rinehart’s wealth (“the richest woman in the world”) as a sign of Australia’s arrival as a capitalist power and a land of opportunity.

Second, she happens to be one of them — hostile towards government regulation, romantic when it comes to the mining industry and contemptuous of most things left-of-centre or green.

Third, all this is happening at a time of Labor weakness — declining membership, a seriously wounded union movement under pressure and an unpopular Commonwealth Government.

It is in such circumstances that the right becomes emboldened to push the envelope. Back in 1975, it led them to adopt tactics in the Senate long thought inappropriate and improper by both sides. Three decades later they again used their senate members, not this time improperly but certainly aggressively, to introduce Work Choices, which not only undermined rights at work but took from the states the capacity to balance the industrial equation.

There is a radical element on the right of Australian politics that liberals and social democrats ignore at their peril (just ask Malcolm Turnbull and Gough Whitlam). I’m sure the captain of the MV Tampa – Arne Rinnan – could tell us a thing or two about right-wing radicalism in Australia.

The support base for such radicalism has always come from the restless element within Australia’s business community — mining entrepreneurs, developers, suburban and regional small businesses and farmers at the margins. Not only do they make life hard for social democrats — they also work hard to destroy the influence of small “l” and social liberals in the Liberal Party.

Over the years the Australian Constitution, the bicameral and federal systems of government and the political and social movements of the left have provided important checks and balances. Note too that the argument can be made that the consensus-through-justice approach to politics is best for everyone — miners, small businesses and farmers included. And it is Labor’s historic responsibility to see to it that such an approach is given priority in our political debates.

This takes me back to politics today and the weakness of “Brand Labor”.

There is every possibility that the Coalition will soon be in power at both levels of government across the country — or at least effectively so. This brings us to the divisions that exist within the Coalition between reformers and conservatives and populists and liberals. The Australian right want governments to be their governments and they don’t want to hear talk of “historic compromise” or “consensus”.

They want war — war on marriage equality, war on crime, war on indecency, war on drugs, war on multiculturalism, war on regulation, war on welfare, and war on climate politics.

To succeed in these wars a number of conditions have to be met.

First, their political warriors need to be ideologically reliable, united within, and in charge. This isn’t easy given the differences of interest between farmers, miners, professionals and manufacturers. Leadership is crucial and at this stage Tony Abbott is their man — although still an unknown quantity as far as the prime ministership goes. They hope and trust that John Howard has taught him well about the art of right-wing politics.

Second, they need maximum influence over the means of communication. They don’t want print, radio or TV to report, they want them to campaign for “the Western world”, “Australian values” and “economic freedom”. They’d love to neuter the ABC but, as the Howard years showed, that’s easier said than done. Nor is it easy to control social media and the blogosphere.

There is, however, a prize that is within their capacity to control — the Fairfax empire. It is experiencing commercial challenges and is vulnerable to attack.

Enter Australia’s richest person. She has money, ideas and plenty of troops in the community – some very clever – willing to support her efforts. Why not use at least some of her resources to become a media baroness? This commercial rate of return may not be so good but the politics are too good to be set aside.

What is happening is a more sophisticated version of her late father, Lang Hancock’s earlier efforts — the Perth Independent (1969 to 1984), the Westralian Secession Movement (founded in 1974) and Wake Up Australia (1979).

Hancock had strong beliefs, but most were too far from mainstream political opinion to be acceptable. Nor did his well known disagreement over mining policy with Western Australian premier Sir Charles Court help. He was, as Lancock’s biographer Robert Duffield described him in a book with the same title, a “rogue bull”.

Gina Rinehart is just as committed to right-wing values as her father, but seems more strategic and focused on “working within” to achieve her commercial and political objectives. Compare, for example, her forging of a partnership with Rio Tinto to develop Hope Downs to her father’s efforts to do a deal with Ceausescu’s Romania.

What Australian progressives are facing with Gina Rinehart, then, is not just wealth and commitment but also political nous — a potent mix at the best of times. Just as I’m sure she is being advised not to overplay her hand, those who disagree with her politics should take the same advice.

Discriminating against businesses because of the politics of their owners is more often than not improper and nearly always counterproductive. Much better it is to keep a sharp eye and be well-briefed on company and media law (and what they require) and build support in the community for social liberal and social democratic values.

Those who don’t want Australia to fall into a right-wing world will need more knowledge, a stronger will and better organisation than their opponents. There can be no shortcuts.

(This article was originally published at The Conversation. Read the original article.) 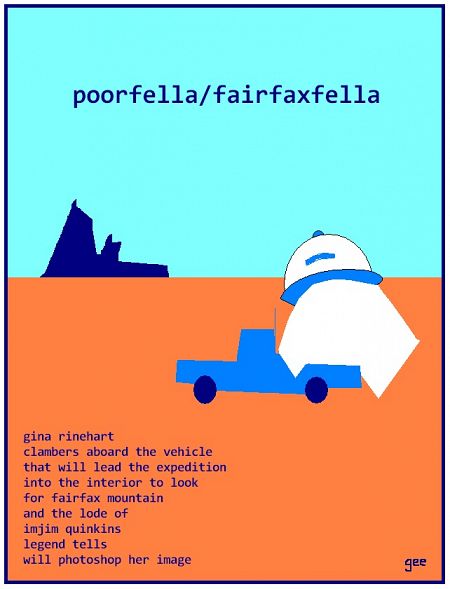