Tony Abbott should embrace change and allow the ACT's push for marriage equality rather than trying to hold back the tide, says Jacintha Webster. 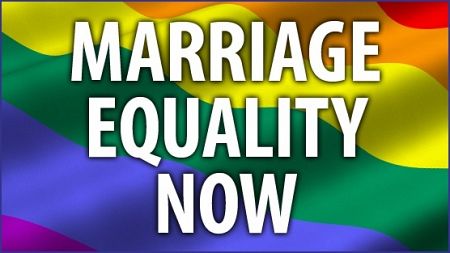 BEING FROM CANBERRA ensures a certain amount of stereotypical teasing about boredom, the booming Fyshwick district, living shoulder to shoulder with politicians and the casualness of naked yoga. The focus, however, has shifted of late. The shift is due to a bill that’s in the pipelines, a bill for gay marriage; or, as I like to refer to it, marriage.

The week before last, the ACT leaped ahead of its sister states and territories in relation to marriage equality. Gay and lesbian couples will soon be welcome to get married in Canberra under new laws. The Government said couples from overseas or interstate can come to The Capital in what is a step towards parity. The Marriage Equality Bill (2013) is expected to pass the ACT Legislative Assembly in October with the support of the Greens and Labor.

Of course, Tony Abbott and his band of 18th century followers are expected to hold up the process, but all they are doing is prolonging the inevitable. It would be naive to think otherwise.

It’s no surprise that Tony Abbott is already flaring up against this latest push for equality, but my question is why? After that campaign, he wasn’t going to let his first prime ministerial act to allow marriage equality.

I ask you, Tony, just let the people be, and see what it could do for you. In this age, in this country, why wouldn’t you want to be remembered as the first Australian prime minister to accept gay marriage, as opposed to the last shmuck who tried to stop it?  Do we want to be archaic like Russia and be afraid of rainbows, or more like our neighbour New Zealand, who made world news for all the right reasons? I know which I would pick. There is daily media coverage of the latest country to jump on board the love boat and it’s distressing that a country as educated and cultural as Australia is moving along so slowly.

When the bill passes, nothing will really change for those of us who swing the other, other way — that is straight people. The country won’t suddenly turn into a giant rainbow with debauchery at every corner. All that will happen is a bit more love, equality, security and respect in the world and how could that ever be a bad thing.

Another point that a friend made to me was the security factor.

Marriage will allow gay couples to be recognised as being in a relationship which means attaining all the benefits taken for granted by heterosexual couples. Traditional couples who have been together a mere three years have more rights to each other’s assets then a gay couple who has been together for 60 years, the term de facto has more power than decades of lasting love, how romantic… The bill will give same-sex couples benefits such as insurance, pensions, tax breaks and inheritance rights.

I took to the streets and asked around about the bill and the general view was not if but when it will be passed, there is nothing but positivity oozing from the people and business’ in Melbourne. A designer in the city, Joseph George, already has same sex wedding bands in his collection and creates them using the latest 3D printing technology. The rings are beautiful and his confidence in the bill being passed is infectious; his view is shared by others.

“I’m so lucky to be part of a generation that can marry whomever they love, regardless of gender,” said Reilly from the Royal Melbourne Institute of Technology.


“It’s about equality and human rights, gay marriage being opposed is fleeting, true love is not,” said Carol, a mother of three.

It is clear that for every one politician that oppresses the move for equal love, there are hundreds of Australians who swing the other way who are for it. When passed, the Marriage Equality Bill and Canberra will set a path for the rest of the country to proudly follow. The path leads to same-sex couples getting married by the end of the year.