America held hostage to two-party failure: Government of, by and for corporations

By admin | 29 July 2011, 10:37am | comments |
As the world edges closer to financial meltdown over a failure to raise the US debt ceiling, are we being held hostage by political parties and corporations? Michele Swenson says the "... time is a now or never to restore the promise of democracy stolen by the oligarchs." 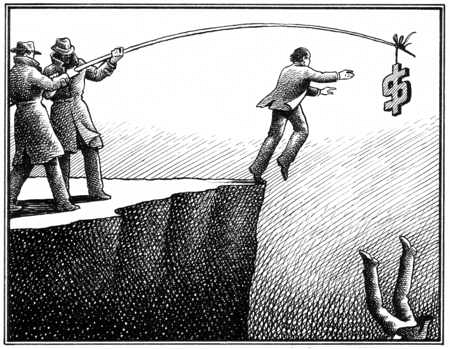 Washington rhetoric waxes Orwellian in proportion to inside-the-Beltway disconnect around the cause and effect of the US economic crisis.

Ranging from the Ryan Budget – "kill Medicare to save it" – and some Democrats – "cut Medicare and Social Security to save them" – to claims that deficit reduction (not jobs) is "what the people want," to the "greed is good" creed that assigns entitlements in the form of taxpayer bailouts to wealthy financial institutions that take for granted the ability to shift risk for their liar's loans and speculative transactions. "Austerity" and "shared sacrifice" are Washington code for preserving tax advantages and privilege for the wealthiest, while transferring private debt and risk to the public, onto the backs of the working/middle class.

Phil Angelides, chair of the Financial Crisis Inquiry Commission, notes that 24 million Americans lack work and nearly $9 trillion in household wealth has vanished since the 2008 economic crisis. The commission's January report detailed "the recklessness of the financial industry and the abject failures of policymakers and regulators that brought our economy to its knees in late 2008."

Writes Angelides, there is "no correlation between who drove the crisis and who is paying the price." The disparity of wealth is stark, as "compensation at publicly traded Wall St. firms hit a record $135 billion in 2010." He notes that, in the face of overwhelming evidence of the causes of economic catastrophe, Wall Street and its allies are revising history, e.g., Republicans like Paul Ryan ignore the fact that "our federal budget deficit has ballooned more than $1 trillion annually since the financial collapse." Instead of confronting the real causes of the deficit, budget shortfalls are conflated with "the long-term challenges of Medicare" as an excuse to shred the social safety net. Rather than rein in widespread lending abuses, Republicans seek to weaken the authority of the new consumer Financial Protection Bureau.

Economist Joseph Stiglitz calls out the titans of finance, who continue to make mega bonuses for their companies' mega losses, even after they set the global economy in a tailspin and shifted all risks for their unregulated credit default swaps onto taxpayers. He describes a nation of, by and for the 1 percent that enjoys 25 percent of economic benefits, largely purchased by Washington lobbyists. The Republican (Ryan) budget plan would cut $5.8 trillion from government spending over the next decade and reduce the corporate tax rate to 25 percent, while increasing next year's Pentagon budget by $17 billion. The highly touted Bowles-Simpson proposal for deficit reduction is a recipe for a weaker economy, warns Stiglitz, as it will decrease jobs, and in turn, decrease revenues. A primary means to decrease the deficit is to increase jobs, a goal that ultraconservatives wrongly equate with large tax breaks for the wealthy - so-called "job creators" - never mind that the Bush tax cuts failed to provide jobs over a decade.

It is easier to destroy than to build democracy. Concerted assaults on democracy over four decades serve the ends of those who deem it their right to rule and reign: Republican religious ideologues and acolytes of Milton Friedman economics. Disaster capitalists precipitate crises by running up huge deficits (during the Reagan and Bush one and two regimes), followed by demands for balanced budgets and deficit reduction, as a means of drastically cutting domestic spending and gutting public education, government jobs and public pensions — thereby shifting all wealth upward.

The political right has laid waste to democratic principles by sabotaging elections and the economy and auctioning government to the highest bidder. Some rightists deem it a "citizen's duty" to challenge the legitimacy of the "ruling regime" by refusing to obey the law - i.e., "destroy the nation to save it." Certain issues should be advanced "for the purpose of prompting a constitutional crisis," pronounced law professor Russell Hittinger. The 2000 Supreme Court majority selection of George W. Bush reset the bar for challenges to the constitution, as did Citizens United vs. FEC in 2010.

In 1995, then-GOP Conference Chair John Boehner handed out tobacco PAC money checks to Republicans on the floor of the House, even as Newt Gingrich warned lobbyists, "For anyone who's not on board now it's going to be the two coldest years in Washington." Republican leaders in a private 1997 meeting with 200 top corporate executives of the Business Roundtable demanded that all contributions to Democrats cease, or corporations would forfeit access to the Republican Congressional majority. Grover Norquist, riding herd over the "K Street Project," demanded that big business hire GOP-credentialed lobbyists and fire those with Democratic connections. By the 108th Congress, it fell to Sen. Rick Santorum to reward party loyalty by vetting the hiring decisions of major lobbyists. "If you want to play in our revolution, you have to live by our rules," pronounced DeLay.

The "defund-the-left" campaign was abetted by Virginia Lamp Thomas, Supreme Court Justice Clarence Thomas' wife, and a key staff member for then-House Majority Leader Dick Armey, who compiled a hit list of liberal groups and nonprofit groups. More recently, Virginia Thomas reportedly received hundreds of thousands of dollars from groups that had expressed direct interest in the outcome of cases that came before her husband, including Citizens United vs. Federal Election Commission, which struck down any limitations on corporate contributions to elections, sealing the Republican deal to crush democracy.

In the '90s, Democratic leadership, reinforced by such corporate-backed groups as the Democratic Leadership Council, turned increasingly to corporate money, away from working people. With both major parties in thrall to corporate money and influence, "we the people" has effectively become "the silenced majority," discounted voices sought out only for votes during election years, an increasingly futile exercise as big money buys candidates and outcomes.

The majority (53 percent) of Americans who opposed the 2010 extension of the Bush tax cuts watched in dismay as President Obama started with compromise and met his Republican hostage-takers more than half way. Neither did majority popular support result in passage of strong financial regulation, importation of lower-cost drugs or government-payer universal health care.

The fatal flaw of Barack Obama's presidency seems to be the compulsion to compromise with the likes of Norquist, bent on destroying democracy by "drowning government in a bathtub." The deficit in public investment imperils us more than the budget deficit, observes former Labor Secretary Robert Reich, citing tax revenues that are less than 15 percent of the total economy, the lowest in 60 years. Large reductions in federal taxes affect state and local revenues, placing more locales on the brink of bankruptcy - thus fulfilling Norquist's fondest wish for state bankruptcies and "bitter nastiness and partisanship" in state capitals.

The president's failure to lead by using the bully pulpit to educate about the true nature of economic crisis and recovery has resulted in Democrats' surrender to Republicans of the economic narrative around deficits, spending, taxes, health care etc. More than the Tea Party corporate shills, disingenuous rhetoric around the economy and the lack of any counter-narrative by the president discouraged voters from going to the polls in 2010 and will likely discourage them again in 2012.

In 1995, a highly secretive umbrella group of America's right-wing leaders, the little known Council for National Policy Action, circulated a confidential memo urging members to push for a governmental shutdown in order to force President Clinton to cave to their budget demands. Rep. Mark Souder (R-Indiana) was quoted: "This is our maximum point of leverage to insist that parts of the revolution are executed." The brief government shutdown that followed failed to achieve their goals. Republicans have willingly upped the ante, holding the country hostage to the threat of economic catastrophe in order to achieve their long-time goal of gutting all New Deal and Great Society programs, while codifying tax cuts for the wealthy. Americans are again being held for ransom in a naked high-stakes grab for total wealth and power.

The majority of people are hungry for a truth teller/leader, like Sen. Bernie Sanders. Instead, corporate media reloops the one-note deficit propaganda of the right-wing sound machine, not seeing fit to even mention The People's Budget, written by the Progressive Caucus. The People's Budget would eliminate the deficit sooner than either the proposed Obama or Ryan Budgets and raise a $31 billion surplus in ten years. It would end the main budget deficit drivers — the Bush tax cuts and Middle East wars; restore progressive income and estate taxes; add negotiation of bulk drug rates to Medicare and preserve Medicare, Medicaid Social Security; eliminate tax subsidies for oil, gas and coal companies; close loopholes for multinational corporations; and tax speculative financial transactions. All are goals supported by the majority of people.

Likewise, Medicare-for-All would contribute substantially to economic recovery. Reich writes that expanding the Medicare risk pool to include all healthy young and sick elderly would save $58 billion to $400 billion annually and sharply reduce the budget crisis, while also permitting negotiation of lower rates with hospitals, doctors and pharmaceutical companies. Payment reform to reward quality not quantity care would provide additional savings.

Circular talk around the deficit short circuits meaningful action around the creation of jobs and financial and election reforms. Sorely needed to counter the corruption of money in elections are the Fair Campaigns Now Act, free media time for all serious candidates and other remedies such as instant runoff voting and reversing the notion of corporate "personhood." Humboldt County, California, passed a county ordinance in 2006 to prohibit nonlocal corporate contributions to elections and also asserting that corporations cannot claim the First Amendment right to free speech. Counties nationwide should follow the lead of a number of counties that have drafted ordinances to deny corporate personhood.

The two main political parties are failing to serve the people, both locked in a dance of dysfunctional political posturing in service of power. In a candid moment this spring, speaking to Charlie Rose, some New York Times correspondents acknowledged the sorry state of our politics: Tom Friedman remarked that we are trapped in a "corrupt duopoly." Crony capitalism is the norm in Washington, lamented David Brooks. Both expressed the wish for a reputable third party to break the Washington gridlock.

Now is the moment for voices that have been willfully ignored in recent years to come together to form a true grassroots movement to advocate for progressive change. Sponsored by over 100 groups led by MoveOn.org, "Rebuild the American Dream" house meetings across the country convened starting July 16 and 17, providing the opportunity for participants to begin writing a "Contract for the American Dream" to serve the people.

The time is a now or never to restore the promise of democracy stolen by the oligarchs.


(This story was originally published in Truthout under the same title and has been republished with permission.)