Reaching to the Sun to save the koala

One of the victims of climate change could be the koala; Kim Peart says we should look to space for the solution. 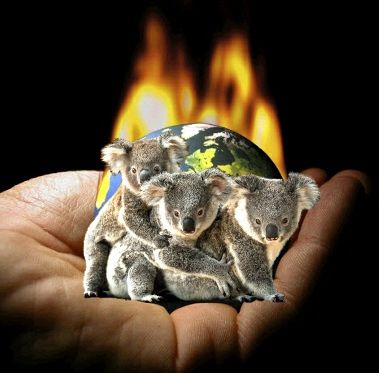 Like a canary in the coal mines, the koala could now be our warning sign that there is danger in the air of planet Earth.

When fossil fuel is burnt, the carbon joins with oxygen in the atmosphere to become carbon dioxide (CO2), which has three significant impacts on our planet.

Since the dawn of the industrial revolution it has been known that CO2 in the air is a greenhouse gas and the more there is the warmer the Earth will become. Other greenhouse gases, such as methane, accelerate the warming process, but CO2 is the most effective, as this gas stays aloft the longest.

A second major impact occurs when CO2 is absorbed from the air into the oceans, turning the seas more acidic. There is now concern that increasing acidity will dissolve shell, killing aquatic life, which could lead to algal blooms in dying oceans, releasing toxic hydrogen sulphide gas, which can kill life on land and destroy the ozone layer.

A third effect stems from the fact that carbon is a food for plants, but increasing levels of CO2 in the air means that plants have more carbon to feed on and this is changing plant biology.

This change in plant biology is making the gum leaf tucker of the Australian koala more toxic and less nutritious, threatening this unique cuddly marsupial with extinction through malnutrition and death by starvation.

With CO2 set to rise in the air as we burn increasing volumes of carbon fuel and as the Arctic permafrost melts and releases long sequestered CO2, the threat to the koala is growing year by year.

We could build protected environments sealed off from the atmosphere, with reduced levels of CO2 in the air, in which gum trees are grown producing leaves that koalas can survive on.

I describe this option as an Earth oasis, which may also serve as arks for life, until we can make our Earth safe again.

If warnings about ocean acidification come true, human communities may also need to be located in protected environments if we wish to survive.

Another approach would be to mine excess carbon from the air as a resource, but as this would take a huge amount of energy, we would need to build many more power stations — and if these are powered by coal, there may be no net gain.

Solar power stations are the best option of all, as our star is an unlimited energy-well that will last as long as the Sun shines. The best location for solar power stations is in space, where the Sun never sets; the radiant energy is much stronger beyond Earth’s atmosphere.

Solar power stations in space were first proposed by Dr Peter Glaser in 1968 and have been the subject of innumerable studies since, but unfortunately, we chose to drill ever deeper into the belly of the Earth for energy and now, like the canary in the coal mine, the koala is set to pay the price as a species.

Japan has been exploring the space based solar power (SBSP) option for some years and in 2009 the Pacific Gas and Electric Company in California engaged Solaren to design an SBSP system.

Should Australia follow suit to build SBSP to access this totally green, clean and unlimited energy supply, with which we could lead the world in mining excess carbon from the air as a resource? We would also have the power to turn the carbon into a wide range of products, even to build Earth Oasis if we must?

If this path is followed, tackling the carbon crisis could even turn a profit.

With unlimited access to stellar energy, we could also desalinate any volume of ocean water and pump this liquid gold to any location. We could turn the deserts green, build more cities, increase local industry and build a much stronger nation.


How would we pay for this investment in the future of our nation and the survival of the koala?

Australia could invest the current resource bonanza to build SBSP and open a whole new future for the lucky country. SBSP could prove to be the ultimate insurance policy, that we may not survive on Earth without.

With SBSP, industry could also be launched beyond Earth and Earth-gravity orbital space settlements built that offer a new option for the future of humanity.

Sustainable employment would be created from the moment a decision is made to invest in this key to our future. Australia would become a leading space-faring nation and inspire a whole new generation of our youth to look to the stars, increasing demand for places in science and engineering courses.

Australia could lead the way in building SBSP, but it may take a collaboration of many nations to open this future, shifting our world from an Earth-bound house-of-cards carbon economy to a Solar civilization that may last as long as the stars shine.

Working with all nations to access the unlimited energy-well of our star, we will be able to win back a safe Earth — and by reaching to the Sun for energy, we can hope to save the koala, save the Earth and create an amazing future for all Earth’s children.

If we leave action on this challenge too long, like the canary in the mine, we may lose the koala and find we have also left it too late for ourselves.


How soon should we start?