Two Australian retirees invoke the 'father of modern science' in their fight against the hegemony of settled climate science. But their arguments – and the advisors supporting them – draw from a deep history of climate science denial and distortion. Douglas Fisher reports. 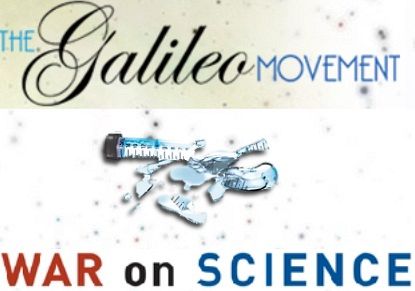 A new group challenging the general consensus on climate science is getting significant air time in Australia, where uproar over a proposed carbon tax may topple the country's minority government.

Launched in February, the Galileo Movement is getting much of its lift from its influential "patron", conservative radio personality Alan Jones, one of the most popular broadcasters in Australia, who has touted the effort on his daily morning show.

The effort is the brainchild of two retirees frustrated by what they see as the orthodoxy of "settled science" on climate change. They cite as inspiration Galileo Galilei, the 17th century astronomer and father of modern science, who challenged the dogma of the Roman Catholic Church to report the Earth orbited around the sun.

The group's website lists a host of figures and references that take aim at what they describe as the "political fabrication of global warming alarm." It argues that the chief greenhouse gas, carbon dioxide, is a harmless component of the atmosphere. "It's an honest document that throws down the gauntlet," said John Smeed, a retired engineer and a Galileo Movement's co-founder. "We have gotten a tremendous amount of support from people who are saying thank goodness someone stood up."

Few issues have divided Australians to such a degree. Earlier plans to curb emissions upended two political leaders, including Gillard's immediate predecessor in the Labor party. Support for the Labor government sits at record lows, according to public opinion polls.

Close examination of the Galileo Movement's arguments shows that the effort is recycling many of the same straw man arguments and distortions about the science that other groups have previously employed to scuttle a cap-and-trade bill in the U.S. Congress last year, a stricter emissions trading scheme in New Zealand three years ago and other regional and national efforts to reduce greenhouse gas emissions.


Who's-who of the denier movement

The effort employs the same accusations and distortions that climate scientists and various investigative panels have battled for years: Academics are doctoring the science, the major science bodies are corrupt, the science is anything but settled.

"It's very environmentally sound: They don't bother to create any new facts. They just recycled old ones," quipped Gavin Schmidt, a climatologist at NASA's Goddard Institute for Space Studies in New York City and a publisher of the website RealClimate.org.

But the attack on science can be effective. By casting doubt on the science, the need for behavior change is blunted — an approach the tobacco industry successfully employed throughout the 1980s and '90s to delay efforts to warn the public of smoking's dangers.

"Every country has its own home-grown marriage of folks who are skeptical of the science and the ideological groups who just don't want regulation," said Aaron Huertas, spokesman for the Union of Concerned Scientists.

"The playing field is a little bit uneven. To succeed all they have to do is give people an excuse, give them a little grain of doubt, and they're done."

The debate in Australia has certainly seized center stage recently. With climate policy all but dead in the United States and a global deal stalemated in the United Nations, Australia Prime Minister Julia Gillard's proposal to impose a $23 per ton tax on carbon emissions stands as the globe's most aggressive - and likely - effort to regulate greenhouse gases.

"They're playing high stakes and high risk," said Kennedy Graham, a Green Party member of parliament in New Zealand, where an emissions trading scheme was amended in 2009 with a weaker version. "I'm not sure which way it will go, but if it goes in, it will be a stronger system than New Zealand's."

The Galileo Movement's stated ambition is to stick around just long enough to "axe the tax." Gina Rinehart, the Australian ore magnate whose coal investments have lifted her atop Australia's list of wealthiest individuals, underwrote a $100,000-plus Australia speaking tour that Smeed and Smit organized last year for Monckton. But the pair are still seeking to raise the $300,000 that Smeed says the Galileo Movement needs to launch its advertising campaign.

Jackson Wells, a Sydney-based public relations firm, is handling the movement's publicity. The firm's eclectic client list ranges from tobacco and mining companies to academics, the Rotary Club International, the Church of Scientology and the sponsors of the Sydney Peace Prize.

By employing the same arguments - and the same players - that have cropped up in other political efforts to address climate change across the globe, the Galileo Movement is part of a pervasive, stubborn tradition, Graham said.

"There will always be people who will argue a case for whatever reason - merit or profit - independent of the facts of the situation," he said. "That's always been there, from the Copernican Revolution to climate change."

In that sense, said NASA's Schmidt, correcting the scientific errors is almost pointless. "The science here is being used as a proxy for a lot of different things," he said, noting that debunking the fallacies in the Galileo Movement's argument won't change the group's prevailing politics.

"But it's clear that one side on this debate is abusing the science much more than the other," he added. "That's worth pointing out."


HOW THE GALILEO MOVEMENT DISTORTS THE FACTS

In making a case against CO2 as a greenhouse gas, the Galileo Movement lists a number of irrelevant facts while omitting pertinent ones.

The Australia-based Galileo Movement touts a series of "basic facts" on carbon dioxide that attempt to explain why the greenhouse gas can't contribute to climate change.

John Smeed, the movement's co-founder, says the case against carbon dioxide as a global warming culprit is simply a matter of "junior school physics."

"If you show this to any scientist and say to them, 'Disprove to me any of these points,' they can't," he said in an interview.

And he's right about one thing: Many of the facts are perfectly true.

But they are also irrelevant in the climate debate. And many facts about CO2 pertinent to climate science are omitted.

DailyClimate.org took up Smeed's challenge and passed the fact sheet [pdf] on to a climate scientist — Gavin Schmidt, a climatologist with NASA's Goddard Institute for Space Science. He also publishes the blog RealClimate.org, a climate science blog.

"You've got true facts," Schmidt said of the Galileo Movement's pamphlet. "They're just not the relevant facts."

The pamphlet's claims about climate science are not new; they've been well honed over several years' worth of debate, and there's a wealth of information on the web debunking the so-called "denialist" movement's arguments.

Here's a sampling of the Galileo Movement's "facts" and an assessment of how they stack up against the body of Earth and atmospheric science, based on an investigation by DailyClimate.org of several science sources.

True, but irrelevant in the global warming debate.

But carbon dioxide and other trace gases in the atmosphere do absorb the outgoing long-wave radiation.

So while their concentrations are miniscule, their effect is anything but: If the atmosphere didn't have those trace amounts of greenhouse gases, New York City would be covered in ice sheets - not sweltering  - on a typical summer afternoon. The globe's average temperature would be almost 60 degrees Fahrenheit lower.

Similarly, toxicity is not an issue in the climate change debate. Yes, crops need CO2. Breathing a little more of it while out on the links won't impair your golf game. But earlier findings that suggested higher CO2 levels could increase crop yields have been disproved by recent research showing that other nutrients are more often the limiting factor.

The relevant questions for climate science are how CO2 changes atmospheric temperatures and circulation and alters the oceans' chemistry and heat capacity.

In this case, the claim confuses residence time of individual molecules in the air with the much longer perturbation to the whole system.

Carbon dioxide is continuously cycling among the earth, plants and animals, the atmosphere and the ocean's surface, with the deep ocean serving as a gigantic long-term reservoir.

Up until the last two centuries, this carbon cycle had been in close balance for the last 10,000 years. But society has pushed atmospheric carbon dioxide levels from 278 parts per million at the start of the industrial revolution to 392 parts per million today, a 40 percent increase.

What's more, the bulk – some 57 percent – of carbon emitted from tailpipes and smokestacks is not even in the atmosphere. It has cycled into the ocean, and scientists generally agree that most of our carbon emissions will ultimately come to a rest in its deepest depths. But that will take  centuries. In the meantime, those extra CO2 molecules will slosh around from earth to atmosphere to upper ocean and back, absorbing energy, acidifying the seas and changing the planet in profound and potentially unwelcome ways. In other words, CO2 emitted today will still be impacting the planet for hundreds of years.

Measurements reveal that CO2 levels are a consequence of temperature, not the cause. Temperature drives CO2 levels.

Some 800,000 years' worth of ice core records indicate that temperature rises did drive an increase in CO2 levels. But that was before humans started digging up huge quantities fossil fuels and transferring all that sequestered carbon to the atmosphere.

It is worth noting, however, that even in the past CO2 had an impact on temperatures, given its role as a greenhouse gas.

It's also worth noting that ancient temperature and CO2-level changes happened over thousands of years. The Earth needed, for example, 5,000 years to bring atmospheric CO2 concentrations up 80 ppm after the last glacial period.

With the onset of industrialization, the tables turned. Humans have increased atmospheric CO2 levels almost 80 ppm in just 60 years. Now humans are the drivers of CO2 level, not temperature.

And what frightens climate scientists is that temperature hasn't caught up yet.

In every 85,000 molecules of air, just 33 are CO2. For every 33 molecules of CO2, 32 are from Nature and known to be essential to all life on Earth. How can one molecule of the same gas produced by humans be blamed for supposed imminent, irreversible, catastrophic global warming? It cannot.

Two hundred years ago, only 24 of those molecules would have been CO2. Today, 33 molecules are — a 40 percent rise of a key greenhouse gas.

The atmosphere weighs about 5 quadrillion tons, and carbon dioxide, despite our emissions, remains a small component of that.  But it grows larger every year. The International Energy Agency expects annual global CO2 emissions from fossil fuels alone to top 40 billion tons a year by 2030.

The math gets complicated from here, but there is an enormous quantity of molecules in those 330 billon tons of CO2.

(This story was originally published as two separate articles – 'Galileo Movement fuels Australia climate divide' and 'Carbon facts don't tell the whole story' – both published on August 16, 2010 on The Daily Climate website. They have been republished under a Creative Commons licence.)