John Pilger says the future looks like a Westfield mall  — democracy and consumerism for the rich and totalitarianism and war for the weak and the poor. 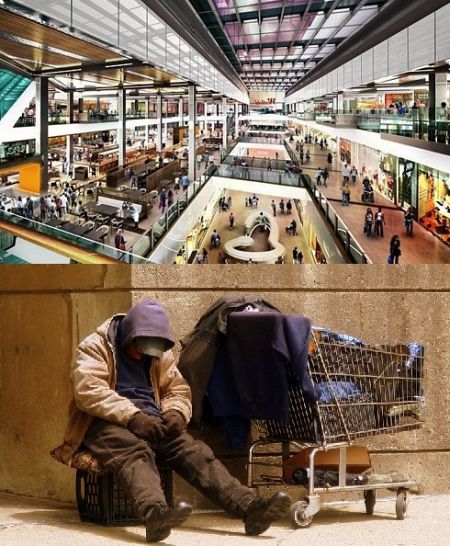 Looking for a bookshop that was no longer there, I walked instead into a labyrinth designed as a trap. Leaving became an illusion, rather like Alice once she had stepped through the looking glass. Walls of glass curved into concentric circles as one "store" merged into another: Armani Exchange with Dinki Di Pies. Exits led to gauntlets of more "offers" and "exciting options." Seeking a guide, I bought a lousy pair of sunglasses: anything to get out. It was a vision of hell. It was a Westfield mega mall.

This happened in Sydney - where the Westfield empire began — in a "mall" not half as mega as the one that opened in Stratford, East London, on 13 September. "Everything" is here, reported the architectural critic Jonathan Glancey: from Apple to Primark, McDonalds's to KFC and Krispy Kreme. There is a cinema with 17 screens and "luxurious VIP seats," and a mega "luxury" bowling alley. Tracey Emin and Mary Portas lead the Westfield "cultural team." The biggest casino in the land will overlook a "24-hour lifestyle street" called The Arcade. This will be the only way into the 2012 Olympic Games for ten million people attending the athletics. The simple, grotesque message of "buy me, buy me" will be London's welcome to the world.

"If you've seen the Disney film Wall-E," wrote Glancey in 2008, "you'll certainly recognise Westfield and malls like it. In the film, humans who long ago abandoned the Earth they messed up through greed, live a supremely sedentary life shopping and eating. They are very tubby and have lost the use of their legs. Is this how we'll end up? Or will we plunge into the depths of some mammoth recession ... with nothing and nowhere to spend?" In the less apocalyptic short term, Westfield is "a step towards our collective desire to undermine the life and culture of the traditional city, along with its architecture, and to shop and shop some more."

The original development plan for Stratford City evoked Barcelona: a grid of defined streets of shops and places to live. Modern, civilized. Then, the Olympics loomed and so did Westfield, a major corporate sponsor. The mega mall, the biggest in Europe, is built in the midst of gray tower blocks not far from where the recent riots occurred, its "designer" products, made mostly with cheap, regimented labor, beckon the indebted. That it stands on a site where London workers made trains - thousands of locomotives, carriages and goods wagons - in what was once called manufacturing is of melancholy interest. The mega mall's jobs produce nothing and are mostly low paid. It is an emblem of extreme times.

The co-founder of Westfield is Frank Lowy, an Australian-Israeli billionaire who is to shopping what Rupert Murdoch is to media. Westfield owns or has an interest in more than 120 malls worldwide. The Sydney Tower, the city's most visible structure, is emblazoned "Westfield." Lowy, a former Israeli commando, gives millions to Israel, and in 2003, set up the "independent" Lowy Institute for International Affairs which promotes Israel and US foreign policy.

On the day after the Stratford mega mall opened, UNICEF researchers reported that British children were caught in a "materialistic trap" in which they were bought off with "branded goods." Low-income parents felt "tremendous pressure from society" to buy "branded clothes, trainers, technology" for their children. TV advertising and other seductions of the "consumer culture," together with low pay and long working hours, were responsible. Children told the researchers they preferred to spend time with their families and to have "plenty to do outdoors," but this was often no longer possible. As "welfare" has become a dirty word, basic facilities for the young such as youth clubs are being eliminated by local authorities.

Four years ago, UNICEF published a league table of children's well-being across 21 industrialized nations. The UK was bottom. A fifth of British children live in poverty: a figure forecast to rise in the Olympic year. The priority of Britain's political class, regardless of party, is the repayment by ordinary people of "the deficit," a specious and cynical term for the epic handouts to crooked banks, and the simultaneous waging of squalid colonial wars for the theft of other countries' resources. This is extremism that never speaks its name.

It is an extremism that has emasculated the social democracies that were Europe's redemption following the Second World War. The forced impoverishment of Greece with exorbitant returns demanded by German and French central bankers is likely to produce another fascist military coup. The forced impoverishment of millions of Britons by the ancien regime of David Cameron, with its growing police state and compliant bourgeoisie, especially in the media, will produce more riots: nothing is surer. One can count upon the extremism of apartheid in any form to trigger such a result, no matter its consumerist gloss hermetically sealed in a mega mall. The prospect is democracy for the rich and totalitarianism not only for the poor; and "liberal intervention," as The Guardian UK calls it approvingly, for those useful foreign parts too weak to resist our "precision" Brimstone missiles.

I went to Parliament Square the other day. The graphic display of state crimes mounted by peace and justice campaigner Brian Haw had been finally removed by the Metropolitan Police, knowing that Brian could no longer stand up to them, bodily and in the courts, as he did for a decade. Brian died in June. Visiting him one freezing Christmas, I was moved by the way he persuaded so many passers by and the power of his courage. We now need millions like him. Urgently.


(This story was originally published in Truthout on 22 September 2011 and has been republished under a Creative Commons licence.)