Alan Jones and the Oedipussy Complex

Alan Jones' hatred for women would seem to be pathological and Oedipal in origin, writes contributing editor-at-large Tess Lawrence. 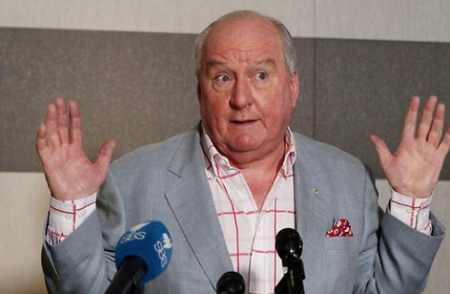 IT MUST repulse Alan Jones to think he exited his mother's body via her cunt, the female coital organ and entry point by which he was both conceived and expunged.

Clearly, any quarrel with her remains unforgiven. The hatred he has for women would seem to be pathological and Oedipal in origin.

Wikipedia, has an interesting explanation of the Oedipus Complex, the Freudian term appropriated from the myth in which Oedipus murdered his father and wed his own mother, Queen Jocasta of Thebes.

In part it reads:

One wonders what might be the source libido pleasure for Mr Jones. And how close he was to his father.

In classical, Freudian psychoanalytic theory, the child's identification with the same-sex parent is the successful resolution of the Oedipus complex and of the Electra complex; his and her key psychological experience to developing a mature sexual role and identity. Sigmund Freud further proposed that girls and boys resolved their complexes differently — he via castration anxiety, she via penis envy; and that unsuccessful resolutions might lead to neurosis, paedophilia, and homosexuality. Men and women who are fixated in the Oedipal and Electra stages of their psychosexual development might be considered "mother-fixated" and "father-fixated" as revealed when the mate (sexual partner) resembles the corresponding mother or father unit.

<=0>
In his expedient apology to Prime Minister Julia Gillard, reported in The Age yesterday, for his cruel, malicious and repugnant remark about her beloved late father, John dying “a few weeks ago of shame", Alan Jones gave us a clue about his relationship with his own father.

“I was taught as a young kid by my father if you're going to eat crow, you should eat it while it's hot.”

It is an insult to crow. One wonders what else his father taught him in his tough love techniques and there's a second clue rooted in the sod that I've italicized.

"There are days when you just have to concede and man up and say you got it wrong," he told reporters in Sydney.

Oh, is that what you call a disingenuous apology made only under serious public, media, political and financial pressure and the still pending threat of a mass boycott on Radio 2GB and its advertisers.

Jones is as redundant on radio as any woman might be in his life.

The Sunday Telegraph's Jonathan Marshall is to be congratulated on his exclusive recording of the speech Jones made at Sydney University Liberal Club President's annual dinner last Saturday and on articles he and John Rolfe have written.

In his silly apology made at a Press Conference, Jones had the audacity to bleat on about the fact that when Marshall signed in for the dinner he did not say he was a journalist.

Dinner guests paid $100 each to listen to this bully. For Marshall, it was certainly money well spent.

Surprisingly, there were no male pole dancers at half time.

Instead, the Sunday Tele reports:

The dinner also featured an auction with items that included a jacket made of chaff bags autographed by Jones.

The material is a reference to the broadcaster's infamous comment that Julia Gillard should be "put in a chaff bag and thrown into the sea".

Jones bid on and won the jacket, but said the auction wasn't his idea.

There was also a pair of budgie smugglers signed by Jones' main political squeeze, Tony Abbott.

Jones probably bought those as well, especially if they had once been worn by Abbott and had bodily fluids of some sort on them. Nothing to sniff at here.

Meanwhile, The Tele's Big Sister, The Australian were caught out by Pedestrian online TV:

The Australian had originally published a recording of the speech, which was taken discretely and unbeknownst to organisers of the Liberal Club President's Dinner (who didn't know there was a Telegraph journalist in their midst), but have recently pulled it.

'He clearly regards it as okay to say almost anything about the Prime Minister. It is just that this time he was caught red handed.'

Unleashing her inner Kath or Kim, in her intro, she got it in one:

'There is one simple thing to say about radio personality Alan Jones' remark on the cause of death of Julia Gillard's father John. It was a low-rent comment that an ordinary decent man would not make.'

Sister, It was indeed a low-rent comment, made by a low-rent man. If her intro said it all, her last paragraph sealed it.

'In evaluating his apology, it is worth considering what would have happened if he had not quickly made it. Sponsors and the radio station he is on, 2GB, would have come under enormous public pressure. Jones is certainly savvy enough to know that. Is he sorry for what he said — or for the trouble it has caused.'

Only last Thursday Alan Jones was awarded the gold Ernie for yet another misogynist rant, the one declaring that “ women are destroying the joint.”

That he is frightened of us is obvious. That he is particularly scared of Prime Minister Julia Gillard is apparent in his sheer malevolence towards her and his constant verbal stalking of her. It seems to go beyond mere political slagging. He inclines towards physical injury.

What's going on there ?

In an excerpt from his unauthorised biography on Jones, called Jonestown and published in The Sydney Morning Herald, über investigative journalist Chris Masters got straight to the point when he wrote:

'The masking of his homosexuality is a defining feature of the Jones persona.'

Masters has won at least five Walkley Awards, an astounding record that has brought much kudos to the ABC and indeed Four Corners. His work has taught us much about the craft of investigative reporting.

The ABC was originally going to publish Jonestown, and then abruptly didn't.

On ABC TV's Lateline it was revealed that the decision had been taken after an ABC board meeting.

Masters, still working for the ABC at the time, said that he had heard that the ABC Board had taken an interest in the book.

“And it's unusual, I would think, for the board to be interested in something from ABC Enterprises. If this has happened before, I'm not aware of it.”

Masters said it all in the book's title. It was Jonestown. KoolAid for anyone who dares cross Alan Jones. 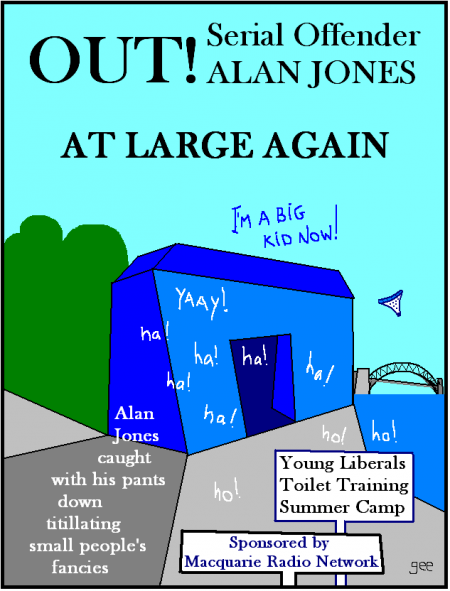 Jonestown was later published under the Allen and Unwin imprint.

Masters does not shy from his subject:

Disquiet about Jones's attachment to some boys grew during a term break when one of the masters found a letter, written by Jones to a boy, that had been left behind in a classroom desk. In it Alan spoke of thinking about the boy late at night, expressing his love. While love letters to boys were hardly appropriate, neither were they regarded as smoking gun evidence of misbehaviour.

The innocent explanation was that Jones's letters were Byronesque exhortations of love and inspiration. Jones has spoken of his belief that males should not feel ashamed of expressing love for one another. "You mean so much to me," one boy remembers him saying when Jones drove him home. The English teacher often made a feature of his sensitivity, telling boys he was too affected by human suffering to teach history.

Nevertheless the discovery of the correspondence was one more reason to be shot of Jones. The majority of the housemasters penned a letter of their own. Addressed to headmaster Stanley Kurrle, the letter spoke emphatically of concern about Jones's influence and control over some boys, describing it as "bad, very bad". To these masters Jones had become a baleful presence, to one an Alcibiades, a charismatic and devious peddler of loyalty. 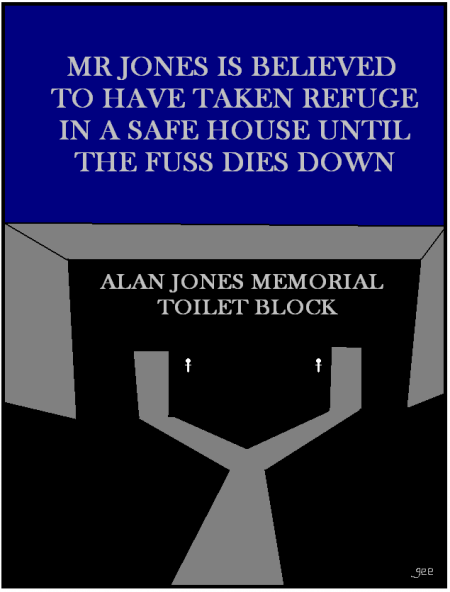 And then there is the notorious 'toilet block' incident in London's West End:

In Margaret Thatcher's Britain, the police had been urged to be more vigilant about "cottaging", the liaising of homosexuals in public toilets...

...Two plain-clothes officers had been watching the underground public toilet at Broadwick Street from the roof and a nearby corner. They had seen a man in an aqua-coloured Lacoste sweater enter the toilet and became suspicious when he stayed inside for a longer than usual period.

Jones was arrested and taken to the Mayfair station, where he was charged with "outraging public decency" and "committing an indecent act". It is only fair to point out that prosecuting authorities were ultimately unprepared to present any evidence to support the charges. “

...The toilet episode was indeed a watershed for Alan Jones. On top of all the other evidence that might have led people to suspect Alan was homosexual, the London incident was going to strengthen, if not confirm, suspicion. An opportunity arose for him to admit his homosexuality. The generally sympathetic response made it easier for him to be himself.

There was no need to confess to wrongdoing. It is not, nor should it be, a crime to be homosexual. It is not a sin to have your penis out in a public toilet. But having easily defeated the criminal charges, Jones sought to defeat common sense as well, by asking the rest of the world to join him in his denial... 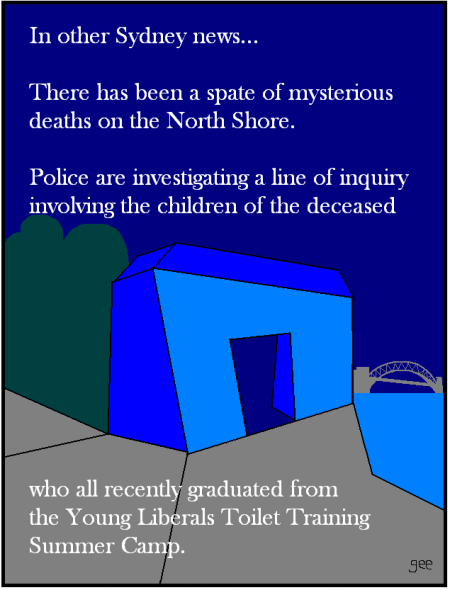 We have long tired of the ilk of Alan Jones; women and men alike. Mean and joyless. Hate filling the vacuum left in an empty heart.

We have had a gutful of you Alan Jones, some of us. Yesterday in Melbourne, about thirty thousand human beings marched in solidarity, love and compassion for the shared human family that we are, against violence towards women in particular and to celebrate the life of Jill Meagher, our sister, who was raped and murdered last week.

It's not our fault you've got an Oedipussy Complex. 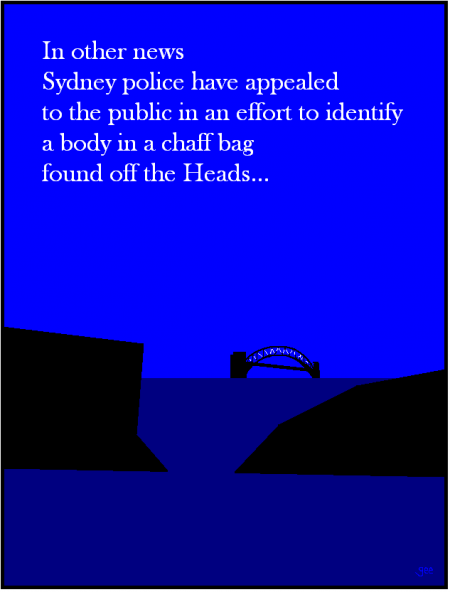