Sue Stephenson pens a reply to a Liberal Party early election campaign email, voicing her disillusionment with its promise of 'a brighter, more innovative and secure future'.

Thank you for your email enquiring whether I am with you — 2016 will be a big one, you say.

It will be the one where Australia decides whether we 'move forward under the Turnbull Government towards a brighter, more innovative and secure future', or whether we collapse under the higher debts that a Shorten Labor Government would impose, with its "pinko", "commo" ideas about tax — and how that will be the ruin of us all.

I know which party I would prefer but honestly, both of you can go jump.

Really, is this all you’ve got?

You know what I’d like to see? Both parties announcing they’re disbanding.

That would be a 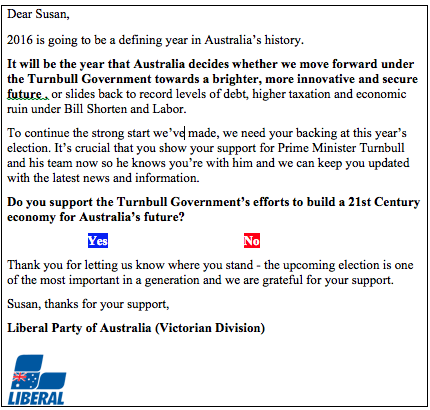 Dear Liberal Party email - Re: Are you with us?

Give up now. I understand how difficult it is in our current age to recognise there are limitations to anything. We are a culture that denies death and whose rich still delude themselves with the notion that infinite growth is a thing. So I understand that you may find it impossible to concede that the time for the party to kill itself is here.

Take Labor with you, while you're at it. It could be argued that you have moved further from your roots along the left-right timeline than Labor. And while your behaviour at the helm has been far more disastrous, Labor’s departure from its roots has been a far deeper betrayal in a sense.

There is nothing you need more, in a period of austerity-mongering that publicly began with Thatcher and Reagan 35 years ago, than a party that will remind you that there are alternatives and that there most certainly is such a thing as a society. In an era where the corporatocracy has risen to reign over the world, we could have done with a Labor Party that stood firmly on its original roots of progressive policies. A Labor Party with policies of protecting the “us” against the onslaught of power and greed that has positioned us merely as consumers and has contributed greatly to the leaching of the guts out of the very society that Thatcher claimed never existed in the first place.

However, despite its disappointments and its free-floating from its roots, Labor is at least willing to face things you’re not even yet willing to consider.

Australia needs an ambitious pathway for an orderly transition to a low pollution economy. #auspol pic.twitter.com/Y5YbWxtvaV

Dear Liberal Party, you (and my once-beloved Labor Party) really need some major regeneration. It involves dealing with the deepest levels of embedded power in our system, however. It involves ditching the corporatocracy — and you do seem quite embroiled.

Indeed, it involves taxing them. There would have to be an awful amount of investment and tax incentives in new start-ups to even begin to make a dent in the deficit caused by those bulging, parasitical corporations at the top of the financial pile.

Regeneration involves going back to your roots — and honestly, I'm not so sure you could handle the reality, dear Liberal Party. How disastrous and disorientating it would be for you to find yourself back in the 1970s. The Liberal Party would have a ... well, almost a "pinko", "commo" feel in comparison to your current, lowly incarnation. You would not be comfortable.

You talk about innovation. But all you’ve got at the moment is a whole lot of bleating about some jobs building submarines that will help continue your role as the sheriff of the USA's South Pacific.

You talk about innovation. But you should go first. Your party is so firmly embroiled in the status quo that you refuse to see the changes that are coming or to create a public conversation around them. I guess you don’t want to draw attention to the idea that there is a public — don’t want the consumers getting ideas. They might go out and start demanding commons and public education divorced from profit-making and God knows where we’d all end up with that kind of shenanigans going on.

But I do think reality is where you need to start. If you’re up for the innovation.

I'm just not so sure Mr Goldman Sachs could handle it.

Liberal-democratic stagnation: The rise of the polarised state https://t.co/a2SfJTN95p @IndependentAus

Everything you need to know about the Australian election with Snitty the Cassowary | @firstdogonmoon https://t.co/Ao9Hu8OKwe

As Australians, we must support Assange's struggle

8 March 2020, 8:00am Australians and our media are failing Julian Assange, writes Sue Stevenson.

18 February 2020, 11:00am It doesn't take a rocket scientist to work out that the neoliberal establishment ...
Join the conversation
comments powered by Disqus
News updates