Will the real Prime Minister of Australia please stand up

Tess Lawrence says: "Will the real Prime Minister of Australia stand up? Or stand down."

The UN Security Council should get on with it. Same with NATO. How much longer do they need to compel Prime Minister Julia Gillard and Foreign Minister Kevin Rudd to talk with one another? Those two can't even agree to disagree over a no-fly zone over Libya. Goodness, even the Arab League has given it the camel's hump (thumbs up). No flies on them.

Will the real Prime Minister of Australia stand up? Or stand down. Whilst she was in The United States of Obama, Julia had her own 'J' curve moment when she spoke to the joint sitting of Congress. Clearly it was an honour—and great for her CV.  And she'll be needing to update that pretty soon.

It doesn't matter that her speech was a bit naff and starry-eyed. She was in the moment. You go girl, I thought. She might as well be at Gracelands with diamonds on the soles of her Blunnies.

Thankfully, she doesn't have the same strain of testosterone in her as Sarah Palin who's desperate to address Congress—otherwise she would have stormed in with an AK48 (the 47 is for wusses) and shot at anything with horns or who looked like moose or Tina Fey. 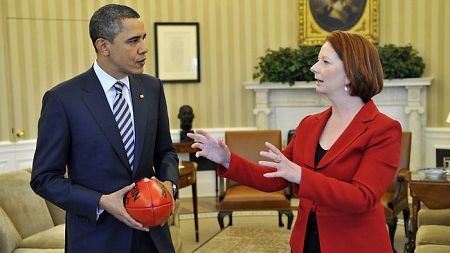 Okay, so Julia teared up when talking about Apollo 11. You'd be forgiven for thinking she'd set off the entire waterworks in the House. Who cares if the Moon Landing was really done in a backlot at Disney – it gave great TV – Bono, Julia and I and millions of us are agreed on that. It reeked of the grandeur, hope and nobility of our shared humanity, of love, peace and flower power and Camelot. Imagine. What happened to all of that? Now I've teared up. Hope they hurry up and do a sequel.

Even without CGI they did a great job. But if you look very closely at the bottom right hand corner of the screen in that dear grainy film, far in the background of the moonscape, just before Armstrong found God and took that giant leap for mankind, you will see the faint outline of what is clearly a parking meter. Or a kid called Ricky Gervais.

I wasn't expecting our Prime Minister to seize that bonzer opportunity to address Congress to necessarily give the world a cooee about getting our collective act together to try to rid it of war, hunger, poverty, slavery, child sex abuse, disease, inequity, injustice, despots and corrupt governments and all of that.

Nah. She's not into Foreign Policy. Like carbon tax and the environment, it's not her strong soot. We know that. But where was talk of freedom of speech, democracy, public accountability, transparency, justice and human rights? And how come she didn't mention the ubiquitous meat-pie and all that inhabits it.

Nor did I expect her, before those good and patient people, to ask the world to accept responsibility for the protection and preservation of Planet Earth.  She rather used the performance as an opportunity to practice her new sotto voce Maggie Thatcher-type delivery.

As our Julia did a Bob Squawk, the tears welled up and her voice broke and cameras couldn't fail but zoom in on Speaker John Boehner wiping tears from his rather lovely eyes, given that he was standing directly behind our PM and The Prez.

But what the media spinmeisters either didn't know or didn't show – a sort of don't ask, don't tell – was this— Johnny’s a self-diagnosed serial blubberer.

Everyone warned Obama that Boehner was a bawler who should be kept away from the plush velvet sofas in The White House, lest he leave watermarks. In fact, when he was first mooted for the possie, American media and commentators were awash with argument about Boehner's suitability on these grounds alone.

So, whilst Julia was sinking the Sherrin in at 1600 Pennsylvania Avenue and schmoozing on Capitol Hill, back home at the branch-stacking capital of the universe, her ratings have become rodent excreta. Ever since we've been Rudderless we seem to be leaderless.

The Age/Nielsen poll today reports that Gillard's disapproval level is the only thing that's gone up—four points to 47 per cent. And her personal approval rating dipped five points. No wonder Rudd is swanning around the world, acting like a rock star and apparently churning out more press releases than Billy McMahon in his Tiberius days.

Kevin and the Ruddites can see the graffiti on the wall. You can Banksy on it. The A/N poll also asked voters to rank candidates and Kevin Eleven delivered up a 39 per cent - and Jools followed up the rear with a temperature reading of 34 per cent. And the Supposition can't afford to gloat.

Malcolm is more popular than Tony. My tip is that the YNot Fronts will overcome the Speedos,

Obama's not a drongo. He called it like it is when he told Julia AND the world, right there in front of her own press corps “from a distance at least, she's doing an outstanding job". It said it all. He said it for Australia as well. Remember that prophetic Grammy-winning hit by Bette Midler in 1990 and the words “from a distance you look like my friend”.

If you remember, the majority of Australians did not actually vote for Team Julia and she clearly didn't sway the femocracy. Even Bill couldn't Shorten the odds. In many ways, she got to lead Labor through a sort of perverse imposed quota system, didn't she Guv?

Look, we might get our frocks off watching a bit of lethal political strategy but I don't think Aussies really warm to knives being taken into the alleyways of Parliament, do we? Or betrayal. Or the international humiliating of our own Prime Minister—by his own Deputy and her uncanny ex-men.

I think we've put Julia in the Cheryl Kernot man-bag category of politics. There's something about Julia and that Cheryl. Know what I mean?

It was imperative that She Who Won't Be Obeyed by the Minister for FA (that Kevvie's a wag isn't he?) strut that part of the world stage to try and redeem herself after the little tanty she threw in response to Rudd's affection for diplomacy and foreign affairs. Remember, when she came back from her first overseas trip as PM in October last year and told ABC TV that “Foreign policy is not my passion". It turns out she was right.

She makes a cute 'lil' Obama girl, don't she? All that stuff about Vegemite or Vegemitenot. Obama certainly didn't even wait to inhale; he made his distaste quite clear when he said the dark elixir was “horrible." Julia explained it should be thinly spread. Gotcha. Just like her promises. Ain't that the truth y'all.

You'd think for all the hype, spin and media coverage (you’ve got to justify the travel expense) the wide-bottomed little red-headed girl got back here in Oz, that some serious political impact had been made by the Prime Minister upon the Yanks. It hadn't. Sure, it was all folksy but way dumbed down.

Indeed there was widespread coverage of the PM's US visit in Oz—but it barely rated a mention in the US. Check it out. I cold-called and contacted Aussies living in the States. Ditto. Most were unaware that Julia was in town.

It is disappointing that no-one asked the hard questions of the President and the PM--whilst they were in the same room playing footy and footsies.

Despite protestations to the contrary, the subject of Julian Assange and WikiLeaks was indeed on the table for discussion--and with Secretary of State Hillary Clinton and former Air Force Lt. General James R. Clapper, now Director of National Intelligence, and CIA Director Leon Panetta.  So what of the outcome of these great minds?

It is inconceivable that the subject would not be discussed, especially given Assange – unlike Australian Prime Minister Julia Gillard – is an Australian-born citizen and given the proliferation of explosive material released and/or published by WikiLeaks that exposes the duplicity of Australian, American and numerous other Governments indisputably contributing to the Tunisian revolution and subsequent continuing events.

For months we've known that the Australian Government seriously contemplated charging Assange on charges of treason. This embarrassingly idiotic and fanciful repudiation of democracy and freedom of speech ironically places Australia on a par with the despotic and authoritarian regimes of other countries currently experiencing revolutionary turmoil for denying basic human rights to their citizens—including Freedom of Speech and dissent.

Moreover, our Prime Minister did reprehensible damage to Julian Assange by publicly declaring his activities to be 'illegal' and given the calls for his assassination and murder, her remarks continue to render him vulnerable to attack and injury. She might as well have declared a fatwa on Assange.

Former Arkansas Governor and Presidential wannabe, Republican Mike Huckabee, infamously stated that "anything less than execution" was "too kind a penalty. Whoever leaked that information is guilty of treason".

In December last year Fairfax media published WikiLeaks cables confirming that Labor queenmaker, Senator Mark Arbib, had been feeding intelligence to American diplomats about the toxic powerplay between then Prime Minister Kevin Rudd and his then Deputy, Julia Gillard.

How come that's not treason? And he isn't the only one.

Now we're told that spokesman for the US State Department, P.J. Crowley, has fallen on his sword and resigned. For truthfully answering a question from students at the Massachusetts Institute of Technology at a talk on the benefits of new media as it relates to Foreign Policy. Great benefits.

Listen up all you budding journalists. You tell the truth and you're outta there.

Sitting in the audience was a BBC Journalist and Nieman Journalism Fellow at Harvard, Philippa Thomas. On her blog 'Philippa Thomas Online' on March 10 she posted a short article about an astonishingly honest exchange between a member of the audience and Crowley.

Crowley was asked about Private Bradley Manning (who allegedly supplied WikiLeaks with documents) and about the US “torturing a prisoner in a military brig".


“What is happening to Manning is ridiculous, counterproductive and stupid and I don't know why the DoD (Department of Defense) is doing it. Nonetheless, he is in the right place".

To her credit, Philippa asked Crowley if the quote was on the record.  To his credit, after an ‘uncomfortable pause' he said, "Sure". She went to press.

I think Crowley couldn't take all the deception and spin any more. He wasn't going to continue The Big Lie. He taught those students a rare and important lesson. Sometimes you just have to stand by your words and your principals.

Being an ex-air force chap, Crowley would easily identify with Manning. He would know of the dirty little secrets similar to those that abound in all of our Defence Forces—including the shabby treatment of damaged returnees.

Amidst the backdrop of man-made horrors and our growing impotence against Nature, whose formidable and angry artillery seems to be waging war upon us all, on land, sea and air—the infantile conduct and incompetence of our politicians and governments, and the no-talkies between the PM and the Minister for Foreign Affairs as they eke out their petty powerplays, seems unworthy of the trust of Australia and its citizens.