Leaked emails indicate the US Justice Department targeted a judge after he ruled against Halliburton, a company with close ties to the former Bush administration. Mike Ludwig from Truthout reports. 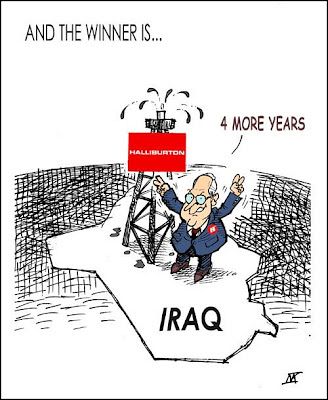 Samuel Kent, the disgraced former Texas federal judge who resigned in 2009 after receiving a 33-month sentence for lying to investigators and sexual abusing two employees, told a senior analyst for the private intelligence firm Stratfor that he believes the Justice Department may have targeted him after he ruled against Halliburton in a "heavy case," according to an email leaked by WikiLeaks.

In an email to her colleagues, Stratfor senior Eurasia analyst Lauren Goodrich describes a conversation she had with Kent over lunch in 2009. Here's a look at part of the email:

For those who haven't followed this, [Kent] was found guilty on perjury & sexual misconduct. Yes, he slept with those two women, but it was consensual. Actually, they were old affairs and long over.

What Sam said was that "isn't is strange that the Justice Department begins sniffing around for dirt to throw at me just weeks after I ruled a heavy case against Halliburton. Then a small set of affairs turn into an untrue situation and then spun up into an unprecedented case against a Federal Judge."

Of course, I told him he was nuts to rule anything against Halliburton.

I also told him that this sounds like a John Grisham plotline.

The Justice Department launched a criminal investigation on Kent in 2007 after a case worker accused him of sexual assault. In 2009, Kent pled guilty to lying to investigators and, as part of the plea agreement, acknowledged that he had non-consensual sexual contact with two female employees. Congress impeached Kent, but President Obama later accepted his resignation.

The email is included in WikiLeaks latest document dump - a trove of internal emails from the global geo-political analysis firm Stratfor, an intelligence agency hired by big corporations and government agencies like the Department of Homeland Security. Other emails reveal that Stratfor has kept tabs on anti-corporate activists groups for corporations such as Coca-Cola and Dow Chemical.

It remains unclear as to what case Kent was referring. In November 2007, Kent was the presiding judge over a lawsuit filed by the US government against Halliburton and other companies over nuclear waste contamination, but the case was later assigned to another judge, according to Justia.com.

Wired magazine has confirmed that the hacktivist collective Anonymous took the emails from Stratfor and handed the emails over to WikiLeaks, which the Anonymous has defended in the past.

(This story was originally published in Truthout and has been republished under a Creative Commons licence.)