Why Native Americans regard Thanksgiving as a national day of mourning

Dr Gary Kohls examines why Minnesota Governors Ramsey and Sibley should be posthumously tried for crimes against humanity and the true meaning of Thanksgiving Day for Native Americans.

Since 1970, Native Americans have gathered at noon on Cole's Hill in Plymouth to commemorate a National Day of Mourning on the U.S. Thanksgiving holiday. Many Native Americans do not celebrate the arrival of the Pilgrims and other European settlers. To them, Thanksgiving Day is a reminder of the genocide of millions of their people, the theft of their lands, and the relentless assault on their culture. Participants in a National Day of Mourning honor Native ancestors and the struggles of Native peoples to survive today. It is a day of remembrance and spiritual connection as well as a protest of the racism and oppression which Native Americans continue to experience.

WE SPORTS-ADDICTED, shop-until-you-drop, historically illiterate, white couch potato Americans have been the beneficiaries of 500 years of genocide against Native Americans, happily perpetrated by historical figures such as Minnesota’s first two governors – Henry Sibley and Alexander Ramsey – and others of their ilk. Alexander Ramsey first proclaimed November 27th as Thanksgiving Day. 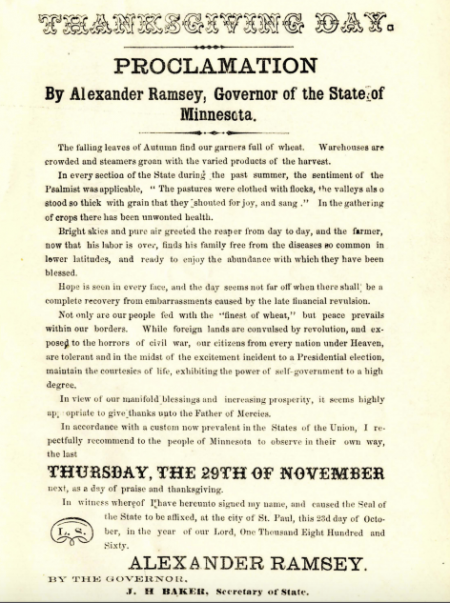 "The Sioux Indians of Minnesota must be exterminated or driven forever beyond the borders of the state."

The original occupants of South, Central and North America (especially Canada and the U.S.) were over-powered by wealth, numbers and superior military technology. The uncountable numbers of crimes against humanity were waged against the aboriginals who had been occupying the land for thousands of years. Obedient, ruthless soldiers, backed by powerful political and economic elites did most of the actual killing.

The genocide started in 1492 when the racist, gold-hungry, white supremacist Christopher Columbus and his sex-starved sailors disembarked from their stinking ships (thinking that they had landed in India) and started pillaging the land and raping the most nubile female inhabitants. Having survived the trip, Columbus and his men eventually demanded, under the threat of cutting their hands off, that the natives produce allotments of gold from precious metal-less mines.

And then, when Native Americans refused to become slaves and cotton was becoming the economic king, our racist, money-hungry Southern ancestors imported, at gun point, millions of black Africans, millions of whom died in chains even before they reached the so-called “promised land” — which the pilgrims had called the “new Jerusalem”.

In many cases, the psychopathic killer-conquistadors, their sadistic soldiers and the right-wing, religiously fanatic Pilgrims that followed Columbus, were initially welcomed, tolerated and even nurtured – a la the mythical First Thanksgiving – rather than being killed off as the criminal invaders that they were.

Trusting the intruders to return their hospitality – in the spirit of the Christian “Golden Rule” – turned out to have been a huge mistake, for the slaughter of Indigenous Americans just escalated. This was often performed in the name of Christ, with the blessings of the embedded priests, whose mission was to convert the heathens to Christianity — or else.

Most of our earliest European ancestors were greatly enriched by the U.S. Army’s massacres, occupations, land thefts, exploitation of resources and the destruction of the Indigenous way of life.

We pink-skinned progeny of those predators were then carefully taught to believe the “big lies”. Thanks to our cunningly censored history books and the myths learned in our Sunday Schools over the ages, we have been led to believe the myth about the “nice” Pilgrims who landed at Plymouth Rock in 1620.

These Pilgrims gratefully shared a feast with their new native neighbours before brutally trying to annihilate them. These illegal, undocumented, white racist immigrants from Europe were obviously not averse to homicidal violence.

Sadly, they were soon followed by a variety of other right-wing religious fanatics that perpetuated the genocide that resulted in a 90 per cent de-population of the Native Americans over the first few centuries.

The disinformation process about the first Thanksgiving is being explored in a new Ken Burns documentary, “The Pilgrims” — which premiered on PBS (USA) on 24 November 2015.

All the propaganda about the First Thanksgiving that I learned in school has probably been designed to make Americans believe that America is a gentle, non-aggressive, peace-loving nation that never hurt anybody. The vast majority of those who have wanted to emigrate here or are seeking refuge from terrorising forces have laughed at the myth about the gospel values of welcoming the stranger to our shores and being merciful to the oppressed.

The myth of the merciful First Thanksgiving has attempted to absolve our ancestors of their guilt for the cruel bloodbaths, that they either perpetrated or approved, when bloodthirsty white American soldiers repeatedly massacred the militarily weaker native population. This is a pattern that American power-elites have perpetrated against weaker nations in every hemisphere of the world throughout our blood-stained history.

A reminder that #Thanksgiving is a 'National Day Of Mourning' for some Americans https://t.co/kW4Cyy6aqB pic.twitter.com/bhsu84KGjj

The following censored-out quotes from a few of our so-called “heroes” need to be told in the context of the true history of the American genocide of the First Nations people. Those “heroes” include Alexander Ramsey, Minnesota’s second governor.

Minnesota Governor Alexander Ramsey had made a fortune in real estate because of his dealings selling property to white settlers and businessmen after he himself had negotiated U.S.-Dakota treaties that cheated the tribes out of their land. This is an excerpt from a statement by Ramsey on 9 September 1862:

“The Sioux (aka Dakota) Indians of Minnesota must be exterminated or driven forever beyond the borders of the state."

On 23 August 1862, Colonel (and ex-Governor) Henry H. Sibley, whose troops had defeated Chief Little Crow in the Battle of Wood Lake also said:

"I shall probably approve them [the executions of 303 Dakota warriors] and hang the villains."

Sibley had appointed the five member military tribunal that tried, convicted and sentenced, via death by hanging, 303 Dakota warriors that had been captured in the battle that ended the six week US-Dakota War of 1862.

Sibley was commenting on the fate of the convicted warriors, all but 38 of whom had their death sentences commuted by President Lincoln. Many warriors were imprisoned at Camp McClellan, near Davenport, Iowa and more than 1,600 non-combatants were imprisoned at a concentration camp at Fort Snelling over the winter of 1862-63. Those that survived the cold, starvation diets and diseases were then deported to concentration camps in Nebraska and South Dakota (Pine Ridge).

in his essay, “A History of the Dakota People in the Mille Lacs Area,” Indigenous rights advocate Thomas Dahlheimer observes:

What happened to the Dakota in 1862 and afterward was a grievous crime against humanity. If it had occurred in this present day and age the United Nations and the international community would condemn it and declare it to be ethnocide and genocide. A United Nations world court indictment would be issued and the perpetrators of this ethnocide and genocide would be rounded up, tried, convicted and punished for crimes against humanity.

For more in-depth world news, subscribe to IA from just $5.

Why Native Americans regard Thanksgiving as a national day of mourning