Why have a royal tour in the middle of a 'budget emergency'?

We're broke, says nominal Australian republican Joe Hockey – in a "budget emergency" – so why did we decide to have an expensive royal tour, asks senior correspondent Barry Everingham.

There is no doubt that the upcoming Federal Budget will contain some surprises and we are being warned for the worst. Joe Hockey wants us to tighten our belts — all of us.

So, dare we ask where  the millions of dollars will be coming from our ardently anglophile Prime Minister will be spending when Wills and Kate, and baby boy George, and their enormous retinue, arrive here in about a weeks’ time.

Readers will know I have been covering Britain’s royal family for over four decades and, in that time, I have met many of them and even got to know a few of them. I have had a few conversations with the Queen and, on a good day, she can be witty and even interested in what’s being said to her. I have never met William or Kate but, I am happy and honoured to say, I knew William’s mother quite well and, although she was a troubled woman, she had a heart as big as all outdoors.

Now, before David Flint and his boy offsider – the pompous Jai Martinkovits – get all upset, let me tell them when an accredited reporter covers a royal tour, the royal concerned has a media reception at the start of the tour and, David and Jai – I hate to upset you boys – but I have even met the Queen privately in a few private homes.

I have never met William and Kate – or little boy George, for that matter – but I know people who know them well and they have nothing but good to say about them.

So, on with the motley now — the royal tour.

Obviously, Abbott is obsessed with the royals and that insane obsession carries over to anything British.

His really gooney un-Australian unilateral decision to reinstate knighthoods and damehoods in the 21st century beggars belief. If I thought I would get a reply, I’d phone his press office and ask when the curtsey will be made mandatory.

Even that wily old monarchist John Howard laughed at the restoration of 19th century titles but the  two-faced old bastard had no compunction in taking an OM from the Queen as pay back for stuffing up the Republic referendum.

Readers  may be interested to know precisely what this tour will cost and indeed why is taking place?

Firstly, the cost of planes, cars, accommodation for the 90 or so  staff and hangers on who will accompany them will be staggering but most of it covered up in fiscal manipulation.

Second — and this is really disgusting.

Tradition has it that the royals coming here – not only William and Kate, but any other official royal visit – are asked what they would like as reminder of their visit.

They  tell us what they intend giving us for having them (as any guest usually does) and then – wait for it – we pay for that gift they give to us!

Of course. But no more absurdly ridiculous than asking them to make the tour in the first place.

It is hard to believe that William, or even little George, will ever be kings of Australia and there is a possibility that England might be a republic before us. There is evidence  that many Poms have had a gutful of keeping  that family afloat.

William will need to wait for Charles to die before he is crowned and George will be in line after William. Longevity is the keynote of the German genes, which course through their veins and the Queen Mother’s Scottish gin-soaked blood is there as well to keep things going.

So we can only guess what was going on in what passes for Abbott’s mind.

The treatment  he metes  out to asylum seekers would make most fair minded people sick — including even, I would think, the Queen herself, who is known for her compassion for the underdog.

Thousands of Australians will cheer and wave to the couple why they stampede around the country as, indeed, they would for a pair of young good looking celebrities which, at the end of the day, is all they are — celebrities, who happen to be royal.

So again, at whose expense will this tour come?

Whose public services will be cut in Joe Hockey's confected "budget emergency" to ensure this charade takes place? 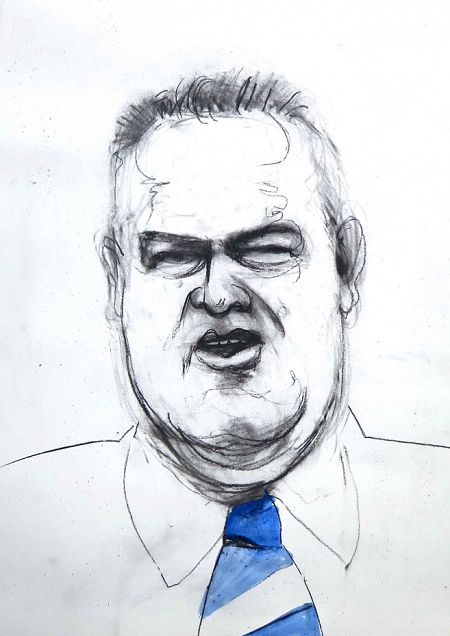