When everyone is laughing at the Government — it's serious

The Abbott Government is becoming more and more widely ridiculed, writes Clint Howitt, who says this is the litmus test of a failed government.

DEPUTY OPPOSITION LEADER Tanya Plibersek described the final sitting week of the Federal Parliament before the May Budget sitting, as “a bad week” for the Abbott Government — but it was going to get a lot worse before the week was over.

Some time ago, we had seen how the obsessive secrecy and the overblown military rhetoric surrounding Operation Sovereign Borders came under fire. Immigration Minister Scott Morrison and Prime Minister Tony Abbott had been ridiculed mercilessly over it.

Already, the Government has been lampooned for its ideologically driven agenda and for being too close to its rich and influential supporters. It was not just for rewarding them, but for doing so at the expense of the rest of the community.

The support given to the Coalition by Gina Rinehart, Rupert Murdoch and loudmouth media personalities has made them the targets of much caustic and satirical criticism.

The devastating parody by Prudence Vindin of Gina Rinehart’s self promotional video is a classic example:

Then there was the version of Gina’s comforting reassurance to Joe Hockey on The Shovel:

"I inherited a $47 billion hole too, and everything turned out OK."

In the past two weeks, more than ever, the government has been on the defensive.

Following hard on the heels of the food labelling scandal involving Senator Fiona Nash, assistant treasurer Arthur Sinodinos stood aside over evidence of corrupt practices within Australian Water Holdings, of which he was first a director and then chairman.

The government came out to defend him strenuously as a "man of integrity".

But it didn’t take long for the jokes to start. His $200,000 salary for a part time position and the fact that he stood to gain up to $20 million if his wheeling and dealing via his political connections had paid off, prompted a flurry of tweets recalling Arthur Daly in the TV series Minder, along the lines of: ‘a nice little earner, Arfur.’

And this, from a party already seen to be lining its own pockets during the travel rorts scandal in its first weeks in office.

Now, ridicule is toxic in politics.

A government which is widely perceived as a laughing stock is not going to be taken seriously by voters. The Coalition knows this. It was a tactic they used constantly against the Gillard Government.

But it was only the start.

It began when Attorney General Senator George Brandis revealed the proposed amendments to the Racial Discrimination Act. Under the guise of protecting ‘freedom of speech’ for the likes of Andrew Bolt, Brandis defiantly asserted to Senator Nova Peris that people had ‘a right to be bigots.’

Commentators’ jaws hit the carpet with a collective thud. Brandis’ provocative phrase was described by Sydney Morning Herald political journalist, Lisa Cox, as ‘ham-fisted,’ ‘politically insane’ and ‘an horrendous own-goal.’ A flurry of protests erupted from our multicultural community.

It was inevitable that the Attorney General would be laughed out of town.

Memes popped up on line, showing people releasing their ‘inner bigot’ at the Cronulla riots and a reminder that Brandis had demanded the removal of a school library book because it denigrated his political hero as a tyrant.

Comments such as these appeared on social media:

This was getting out of control. The Government needed to hose down the situation to take the heat off itself.

Instead, Tony Abbott only added fuel to the fire by announcing that he was reintroducing the British tradition of granting the titles of knights and dames.

Predictably, a conflagration of hilarity ensued.

It didn’t help that it had been done without consultation to his party’s members and that pompous monarchists like David Flint and George Brandis rushed to defend the move.

In no time Abbott was lampooned as ‘Sir Pository of Wisdom’ in ‘The Game of Tones.’

Even serious journalists like Annabel Crabb and Bernard Keane joined in the festival of frivolity:

That splatting sound you hear is Australian cartoonists' heads exploding in unison, by the way. #especiallymarkknight

The thing I'm most looking forward to? The gong for "Deliberately" Baron Heffernan. #KnightsAndDames

Dame MacTiernan calls 'pon Bonny Prince Tony to rule out selling aqueducts and castles to knaves. He declines to #qt

it being 2.30 in the after-noon, Sir Nicholas Champion is dispatched from the chamber, as is the ritual of this place #qt

Next morning on the ABC Radio National's Breakfast programme, James Carleton stepped out of his usual serious role of summarising the day’s newspaper coverage to read out Keane’s collated tweets in sonorous mock-heroic tones.

But along with the ridicule there has been a growing anger and contempt.

Groups like the National Seniors’ Association forced Finance Minister Mathias Cormann to back-peddle on planned financial ‘reforms’. Retirees were aghast at the proposal to undo the previous Government's financial advice measures, which prevented financial advisers from taking secret commissions and acting in their own interests rather than their clients’.

Labor politicians have been quick to point to other measures which clearly discriminate between the privileged and the ordinary citizen.

While the health and education cuts, the jobs being lost and the end of benefits to the orphans of war veterans are borne by ordinary working people, the removal the mining tax and the price on carbon provide the big end of town with windfalls worth hundreds of millions.

However, it was not just the Opposition attacking the Government.

Hand-picked by Tony Abbot to head the Prime Minister's Indigenous Advisory Council, Warren Mundine was critical of Brandis’s support for expressions of bigotry, saying the changes were more about them being a sop for one of the government’s media mates, Andrew Bolt, than about freedom of speech.

Backbencher Ken Wyatt – the first Indigenous candidate to win a seat in the House of Representatives – threatened to cross the floor to oppose the amendments.

On the issue of British honours, Liberal Senator Sue Boyce, a republican, was initially critical and upset that the party was not consulted but, in the end, pleased that it had revived the flagging republican debate.

Liberal MP Russell Broadbent, observing that the Prime Minister did not take the matter to the party room, wryly described the announcement as an "interesting surprise".

To top it off, the Government had slipped even further behind in the opinion polls.

They now trailed Labor by 48 to 52 according to Newspoll and by nine points (45.5 to 55.5) in the Morgan Poll, on the two party preferred results.

The growing disunity within Government ranks was developing into a serious problem for them.

By Wednesday’s Question Time, the strain was showing. The Government was looking rattled and the Opposition was buoyant.

Speaker Bronwyn Bishop was not amused.

Already heavily criticised for her perceived bias, she responded to an outburst of laughter from the Opposition benches:

This tetchiness from Bishop culminated in high farce.

"Are you ruling people out of order because they are laughing?"

With that, the Speaker dispatched Collins.

Meanwhile, Opposition Leader Bill Shorten continued to rib the government over the reintroduction of British honours by interjecting that it was like watching "the royal comedy channel". He niggled further by humming Rule Britannia.

After three years of directing sotto voce barbs across the dispatch box to Prime Minister Gillard and nicknaming Shorten ‘Electricity Bill’, it was a bit rich that Abbott now demanded a withdrawal from Shorten — which was given, but to more jibes from the Opposition benches.

With a disapproving frown, Speaker Bishop gave a blanket warning:

"... you can regard yourselves as universally warned."

For that he was named by the Speaker.

To be ‘named’ by the Speaker for disorderly behaviour is designed to be used only for the most serious breaches of parliamentary discipline. It is rarely used. The imposition of this penalty, which evicts the member from the chamber for 24 hours, was less a reflection on the offence than of the Speaker’s frustrations.

Immediately, Tony Burke was on his feet to move a Motion of No Confidence in the Speaker. This too was an extremely rare and serious move.

"Yesterday, we had a Member of Parliament thrown out for laughing.

"Madam Speaker, we have spent months watching you laugh at every joke from the ministers at the expense of members of the Opposition. But somehow, somehow, that is an appropriate way to conduct the role."

He then accused her of bias:

"Ninety-eight people have now been thrown out of the House by you. Every one of them from the Opposition: 98-0. No Speaker in the history of Federation has a record like that."

The motion was lost on party lines.

Bizarrely, the Prime Minister, who handpicked Mrs Bishop for the role, chose to defend Bishop on the basis that she brought:

"...style and a touch of humour to the sometimes dour proceedings of our Parliament."

Even more laughably, he claimed that, it was Labor that

"... had lost its sense of humour when it lost the election."

As well as the stigma of perceived bias, the mismatch between the Speaker’s rule and the triviality of the offence further undermines the government’s efforts to convey an image of competence. Instead, it offers ongoing grist for the mill of cartoonists and the on-line commentariat.

There is no doubt the government is worried. Widespread public ridicule is a litmus test of a failed government.

They will not be well pleased if the laughter at their expense continues. 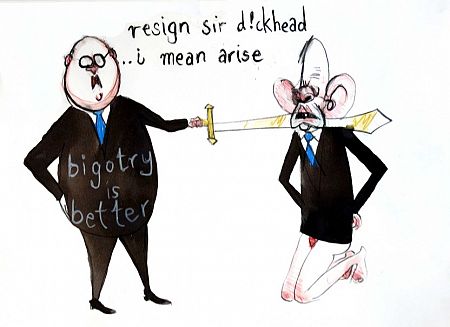 When everyone is laughing at the Government — it's serious