What if Abbott and his cronies are just a bunch of psychopaths?

The latest revelations about the Abbott Government have led psychologist Lyn Bender to wonder: is Prime Minister Tony Abbott incapable of human feeling?

THE psychopath may be smart even highly intelligent, but lacks empathy and is a chronic manipulator.

He is morally bankrupt due to this lack of empathy and narcissism. What he doesn’t feel, he mimics to further his own ends.

The psychopath or sociopath is careless of others feelings, exhibits no guilt or remorse, lies compulsively and acts impulsively with little regard for the consequences of those actions.

Grandiosity inflates a sense of getting away with anything.

The focus is never on reparation — but on escaping any responsibility for the harm inflicted on others.

The drive is essentially narcissistic, even if it is paraded as altruistic.

The psychopath may become enraged at accusations, and aggressive and defensive, even if those accusations are grounded in fact.

Behaviours and responses that appear to contradict the lack of empathy are, in fact, part of manipulating others to further the psychopath’s own ends. The actions are thoroughly Machiavellian with the end justifying the means — but the ends are narcissistically focused.

The latest revelations about the Abbott Government's manipulation, deceit and lies have led me to wonder: is Prime Minister Abbott incapable of human feeling?

Previously I have asked questions in IA about Abbott and his team — concerning idiocy, insincerity, and being a headless chook.

The latest revelations − I mean allegations − of blatant lies regarding the Government have led me to confront, a profoundly serious fear — a scarily looming terror.

No, it’s not the Joe Hockey fictional budget crisis.

What is keeping me awake at night is the following nagging thought:

"What if Prime Minister Tony Abbott just a psychopath?"

Surrounding himself with like-minded ministers advisors and old cronies, Abbott is forging his way towards his version of a small government free market quasi neo conservative nirvana.

A brave new land where the poor are punished for being poor, the disabled are abandoned, universal education and health care is degraded and the old and poor are denied health care in the hope that they will work until death, at seventy.

Currently, that is still mostly the inglorious dream of  those espousing the perverted right wing agenda of the denialist propaganda think tank the IPA – the Institute of Public Affairs – and Abbott's handpicked Commission of Audit.

Indeed, while Tony Abbott avoids the ABC like the plague, he is most comfortable in the company of friends.

Watch here as he addresses the IPA on freedom of speech — to great applause.

Also, see here Abbott invoke the freedom of Adam and Eve in the Garden of Eden, declaring goals:

"So, ladies and gentlemen, that is a big fat yes to many of the 75 areas of policy you – the IPA – urged upon me."

Indeed, as I write this, Abbott is working to implement his agenda.

Here the IPA's goals are shamelessly enunciated by research fellow with the IPA — Chris Berg.

They include repeal of measures and bodies to combat climate change and the breaking up and sale of those vile socialists, the ABC and SBS:

50. Break up the ABC and put out to tender each individual function

As we know, there is too much free speech and left wing science on the ABC, and Abbott has attacked it for:

The unpatriotic ABC also reported on those asylum seeker abuse allegations — of having their hands burned by the Australian Navy. The ABC should never have reported them, in Liberal Party world, since they were vigorously denied by Morrison and Abbott.

And that should be enough.

The ongoing menace to the ABC in threats to its funding has sent a visible shiver through many programs. Q&A has been cowed and Lateline last night had two members of the lunar right discussing the Budget to Dorothy Dixers from Emma Alberici.

Says all you need to know.

But is this just a bumbling rookie government with a fixation on becoming a replica of the American Tea Party movement?

Or is there evidence that Abbott and his cronies are running a psychopathic government?

In my view, there is no question.

1. Tony Abbott is a compulsive liar

I could write many additional pages about of Abbott's lies and middeeds, but these have been well documented in the Alan Austin's IA trilogy: Is Australia run by compulsive liars: Parts One, Two and Three — links to all three pieces here.

2. Lack of empathy and compassion

Tony Abbott as health minister shunned the dying asbestos cancer sufferer Bernie Banton calling his attempt to deliver a petition − on behalf of fellow sufferers − a stunt. Watch here to view a complete lack of remorse and concern for his callous statements.

In giving a speech on forced adoption apology day. Abbott talks of birth parents, including fathers, who have always loved their children. Watch here as he continues on speaking while ignoring the loud and indignant protests of women in the audience, who had been forced to adopt their children and abandoned by the fathers of their children.

On homelessness, as a ‘lifestyle choice’, and the poor will always be with us. Watch here

Responding here to the death of an Australian soldier in Afghanistan, after being told better support and resources might have saved him:

3. On Tony doing whatever it takes

Pre-election, Tony embarked on an image makeover, intent on being reinvented as non-sexist and non homophobic.

He enlisted the help of his family.

Can you spot the shallow imitation of transformation and the disingenuous responses, here during this 60 Minutes interview with Liz Hayes?

Tony Windsor is renowned for his integrity and stated in parliament that Tony Abbott:

"... begged for the job and said he would do anything, anything at all, to become prime minister, except sell his arse — but he'd consider it."

"Tony Abbott is capable of changing his mind on important policy. He tells us he doesn’t always say what he means. Tony Abbott would say whatever he felt he had to, in order to attain power."

Here is Tony Abbott denying climate change in 2008, or is he. He laughs and grins:

"...this is the most important moral issue of our time, I mean it is isn’t it?"

And here is Tony at his most duplicitous, lying to Australias Indigenous people to gain their trust and the electoral approbation that would come with it by deceitfully saying he would spend his first week as prime minister – if elected – with the Aboriginal people of Eastern Arnhem Land.

He lied. It has been seven months and he hasn't been seen by the Yolngu People — except on TV.

Here,Abbott lies about this in Parliament.

Abbott said in 2010 on Lateline that he took the view of Australia Day that, while some Indigenous people regarded it as Invasion Day, they have much to celebrate in Australia’s British culture.

Not much empathy or respect there.

Abbot can’t hear, understand, or empathise with the voices expressing the suffering of aboriginal people as whites celebrate Australia Day.

4. Abbott completely disregards the well being of future generations

According to Keating, Abbott's modus operandi is:

But we should not ignore those who Abbott has gathered around him and those who are reflecting his psychopathology.

But it is not just about wrecking the joint; Abbott has beside him cronies who are implementing policy that is downright sociopathic in its intent.

Immigration Minister Scott Morrison, who could be dubbed the minister without a heart, administers the illegal murderous Abbott ‘stop the boats’ policy, which has been criticised by the UN. Amnesty International has also critiqued, as inhumane, offshore processing under Operation Sovereign Borders (OPS) — soon to become Border Force.

The policy now has international fame − or rather infamy − for its violation of human rights. Under it, Morrison, on behalf of Abbott, has just pushed another boat back to Indonesia, reportedly adding − as though they were not actually humans − three extra unwanted (by Australia) refugees located on Christmas Island to the vessel being turned back — potentially an offence under Australia's own domestic laws against people smuggling.

But ultimately, it is in fiscal policy that the greatest good or harm can be done. It looks as though Treasurer Joe Hockey − with Tony Abbott’s blessing − is taking the harm option.

The treasurer is urging the poor to tighten their belts, while hyperventilating about overspending causing the budget crisis. But most credible economists say is not an immediate crisis, but a long term problem requiring a restructuring of revenue — not belt tightening.

Should we bring out the smelling salts or the cigars? The financial team appear to be in triumphant cigar smoking mode, as the poor and the disabled the old and unemployed come within the budget’s rifle sights. Bob Ellis dubs Hockey on IA as the ‘dumbest politician ever’, as the treasurer crows about implementing an austerity regime that has been utterly discredited throughout the western world, including by world renowned economists such as Paul Krugman and Joseph Stiglitz because of its clear economic contraction effects. Hockey is also, ironically, under a cloud regarding hefty donations for providing exclusive access to select groups, including business and lobbyists, at pricey functions.

Finally the ultimate destructive piece de resistance by Abbott must be his decision to completely ignore the warnings of 97 per cent (or more) of the world's climate scientists on the extreme danger to our planetary home, of human induced global warming,  including Australia’s own chief scientist Ian Chubb. David Suzuki has called it wilful blindness and a crime against future generations for Tony Abbott to ignore the threat and suppress action on climate change.

Meanwhile, Abbott supports and subsidises fossil fuel polluters and is hell bent on suppressing investment in renewable sources of energy. He has by the way, appointed climate sceptic Dick Warburton to review the renewable energy target — flagging his contempt for renewables.

Abbottshows no respect for scientific evidence or empathy and concern for the fate of Australians and millions of the world’s poor, or for his own children and future grandchildren.

Is it because he is a psycho with no empathy or care for anyone apart from himself, who has gathered a bunch of sociopaths around him?

Traditional counseling does not work for psychopaths, who may add skills thus gained to their manipulative repertoire.

Less intelligent psychopaths may end up in jail. Smarter ones may end up running companies or the country.

If Tony Abbott is a psychopath he is incapable of genuine care for others.

He should, therefore, not be running the country.

Be afraid; be very afraid. 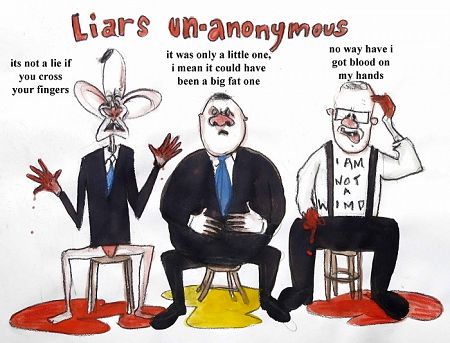