Despite all the Coalition's pre-election rhetoric about a "budget emergency", the Abbott Government has inherited a nation in rude economic health. 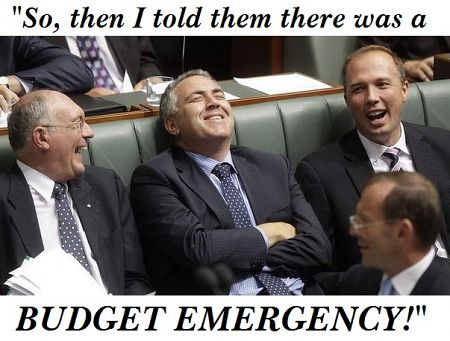 HAVING THE WORLD’S BEST ECONOMY is great news for all Australians.

Well, almost all. Perhaps not for the prime minister, the treasurer or senior ministers.

Firstly, they must now admit that most of their assertions about the state of the economy in recent years have been patently false. There is no “budget emergency”. Australia is not “drowning in debt”. And the path to surplus during the worst downturn since the Great Depression will be uphill.

Secondly, as they inevitably adopt almost identical broad economic policies as the Rudd/Gillard Governments in the months ahead, they will be judged hypocrites.

And, thirdly, with Australia’s economy leading the world, there is only one direction it can go in global rankings.

According to Joe Hockey before the election, “the cupboard is bare”. He insisted that his plans alone would re-stock the larder.

How will we know if he succeeds? By making time comparisons on twenty key measures.

So what is the actual state of the economy Hockey has inherited?

The International Monetary Fund (IMF) measures Australia’s income per person at US$64,157 for 2013. This places Australia fourth among the IMF’s 35 wealthy nations.

According to last month’s Credit Suisse global wealth report for 2013, Australia’s wealth per adult is US$402,600 — the second highest in the world after Switzerland. Gross domestic product (GDP) is expanding at an annual rate of 2.6% — currently the 5th best performance in the Organisation for Economic Cooperation and Development (OECD). Australia is the only OECD country to have had continuous growth for 22 years.

Defined as the number of people employed or looking for work as a percentage of the total population, participation in September was 64.9%.

Australia’s jobless has remained reasonably steady through the global crisis which has seen disastrous increases elsewhere. For the last 57 months the rate has ranged between 4.9% and 5.9%. September’s level was 5.6%.

The inflation rate was 2.2% in September, having stayed within the range 1.2% to 2.5% for the last seven quarters.

Australia’s general government net borrowings – or skyrocketing debt as it is known by the Coalition when Labor is in office – were just 13.74% of GDP when the new Government took over in September. In the OECD, only the four small Scandinavian countries and Estonia have lower debt. The final general government underlying cash deficit for 2012‑13 was $18.8 billion, just 1.2% of GDP, one of the lowest in the developed world.

This is an extraordinary turnaround from last year’s deficit of $43.4 billion, or 2.9% of GDP.

Since 2011, Australia has had triple A sovereign debt ratings with all three major international agencies — Fitch, Moody’s and Standard and Poors.

This year’s Heritage Foundation survey ranks Australia’s economic freedom first among the OECD nations and third in the world behind merchant city states Hong Kong and Singapore. Measuring freedom from government obstruction in starting and running businesses, Australia’s score was 82.6.

Gross operating profits for the June quarter were $73.98 billion, according to the Australian Bureau of Statistics (Table 15, line 52, column AG). Profits have not been below $70 billion since March 2010. The highest during the Howard years was $58.96 billion.

This has peaked at over 18% of GDP recently, the highest level in more than 50 years.

The ABS shows new capital investment (Table 1E) at $26.8 billion in June. It has been above $25 billion each quarter for the last six quarters. The highest during the Howard years was $11.2 billion.

These are the assets held or controlled by the Reserve Bank, usually in gold or foreign currencies. The September level was AUD$52,971 million, up from $32,718 million when Labor took office.

The Aussie dollar fluctuated between 89 and 93 US cents in the two months before the September election, between 57 and 62 British pence and between 67 and 72 Euro cents.

From an all-time high surplus of AUD$2,717 million in June 2010, the balance has slipped into deficit recently due to falling export values and rising capital imports.

In August, the trade deficit was AUD$815 million.

This reflects the amount of imported goods an economy can purchase per unit of export goods, hence the higher the better.

So that’s the economy the Coalition has inherited. Yes, it has its challenges, but fewer than in earlier periods.

According to this methodology, the top twelve economies at June 2013 were:

This is a significant shift from when the first Rudd Government came to power on the eve on the global financial meltdown.

Just how well the Abbott Government manages the economy henceforward we can measure against the above twenty benchmarks.

It will be possible to assess claims like this from Tony Abbott’s address to the Australia-Israel Chamber of Commerce in July:

“Based on previous experience, we are confident that [our] changes will produce a million new jobs within five years … unlike the anaemic job creation record of the past six years.”