Western hypocrisy under fire in the wake of the Turkish coup

AS THE DUST SETTLES in the wake of Friday's attempted military coup in Turkey, Western media and leaders have been nearly unanimous in condemning Turkish President Recep Tayyip Erdoğan for his autocratic crackdown on supposed dissidents.

Observers have pointed out that such condemnation looks like hypocrisy, as the same leaders have allied themselves with autocratic regimes elsewhere in the world and in the Middle East, in particular.

As Common Dreams reported, many leaders such as U.S. Secretary of State John Kerry and EU foreign policy head Federica Mogherini have emphatically warned Erdoğan to respect human rights in the wake of Friday's failed coup.

Indeed, when Erdoğan announced on Sunday that he would reinstate the death penalty, the international outcry was swift. Mogherini emphasised that Turkey would jeopardise its chances of joining the EU if it did so.

According to The Guardian, Mogherini said:

"No country can become an EU member state if it introduces the death penalty."

Syrian writer Rime Allaf pointed out the hypocrisy of Western leaders' outrage on Facebook — and others joined in on Twitter: 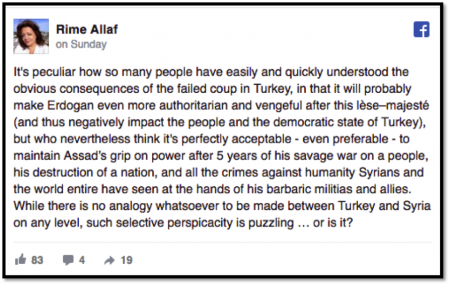 FYI: there are massive reasons to criticise Erdogan. Just strange to see Sisi apologists and coup supporters feign concern for HR in Turkey.

Not to mention Bashar Assad over the last 5 years. https://t.co/p2Vzy8zrFt

It also didn't escape notice that the U.S. didn't publicly comment on the coup until it became clear that it had failed. As Middle East Eye editor-in-chief David Hearst wrote:

If you want to know why Europe and the U.S. are a busted flush in the Middle East, why they have lost all moral authority, indeed any authority at all, and why they are no longer the candle bearers of democratic change, look no further than the three hours of silence as they waited to see which way the wind was blowing in Istanbul and Ankara.

Meanwhile, others pointed out the United States' own lack of democratic processes and unconstitutional detentions when it comes to so-called "suspected terrorists".

Indeed, the U.S. announced Monday that it had resumed its ongoing, controversial air strikes on ISIS targets from a Turkish airbase.

The US gov, yk the state that set up & operates Guantanamo, has a literal extrajudicial kill list etc preaching to Turkey about due process.

UPDATE: After close coordination with our Turkish allies, counter-ISIL coalition air operations in Turkey have resumed.

Meanwhile, many Turkish people continued to decry Erdoğan's autocratic crackdown while also shooting down a conspiracy theory that the coup was staged by the Turkish leader as an excuse to grab power.

As Zeynep Tukefci, a Turkish professor of sociology at the University of North Carolina, wrote on Twitter:

tl;dr There *is* an extensive secret network that was govt's closest ally but they had huge falling out. Coup appears to be continuation.

It sounds nuts, but it's not. There has been extensive English language coverage. This doesn't excuse any authoritarianism. But it's real.

Indeed, many English-language journalists have been providing context for the situation in Turkey by recapping Erdoğan's history of authoritarianism and the concomitant rebellion against it in some political and military circles.

It appears Erdoğan's push to quell dissent has risen to new heights following the failed coup: as of Monday, nearly 8,000 police officers had been fired and over 8,000 people had been detained for alleged involvement in the coup.

'So numerous are those detained that a sports stadium is being used to hold some of them.'

And on Monday, the Turkish Government warned the U.S. that it would sacrifice good relations if the country refused to extradite the Muslim cleric Fethullah Gülen — a longtime political opponent of Erdoğan who currently lives in self-imposed exile in Pennsylvania and oversees a controversial network of U.S. charter schools. Erdoğan has blamed Gülen and his followers for orchestrating the coup.

As The Guardian's Ranj Alaaldin wrote,

'As with many coups around the world, the aftermath will be bloody and repressive. It will be rule of the mob, rather than rule of law that will shape Turkish politics and society [...] Darker days lie ahead for Turkey.'

This story was originally published by Common Dreams on 18 July 2016 under the title, 'As Democracy Dwindles in Wake of Turkey Coup, Leftists Critique West's Hypocrisy' and has been republished under a Creative Commons licence.

War on the people, and democracy has gone up another 1000 notches.#turkey #Dictatorship https://t.co/7r95rLy1ta