The voters of Victoria gave themselves an early Christmas present yesterday, relegating the Coalition into the slim ranks of one term losers, writes contributing editor-at-large Tess Lawrence. 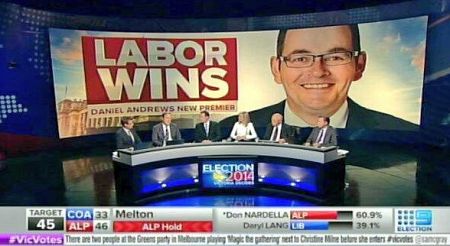 The Victorian people gave themselves an early Christmas present yesterday, relegating Napthine's corrupt Liberal  National Party Coalition to the ignominy of a first term government, sending an   explicit warning to Premier elect Daniel Andrews and his Labor colleagues they are on notice to keep their election promises. Or else.

Labor's victory and the emergence of the Greens as a viable political third force is still in the counting as I write.

To the searing disdain of voters, the Abbott Coalition Federal Government has learned the hard way that blowback of interventionist politics is no longer automatically tolerated by voters, regardless of their political colours.

The people have an antidote for such Abbottulism.

The Abbott government should be afraid. Very afraid.

Moreover, Liberal-led State governments ought to be quaking in their Ferragamos.

States and territories should interpret Labor's victory as a sign that Code Red restitution politics by people power is a game-changer and here to stay.

The siren will be heard around the nation.

It has the potential to be the clarion call for an 'Ordinary People Spring', a special OPS that responds to corrupt and corrupting political leadership that excises citizens from decision-making, treats everyone ‒ excluding vested interests and the top end of town ‒ as the last among equals and arrogantly refuses to be transparent or held to account.

Libocracy, a self-serving distorted version of lower-case democracy, has been insinuating its way into governance for decades.

So has Labocracy, built with similar scaffolding over which a tarpaulin of pretext has been nail-gunned; men and women in striped suits and yellow hard hats, feigning concern for the battlers and the disenfranchised.

We are not going to take it anymore.

In a happy co-incidence on this Sunday, St Andrew's Day, Daniel Andrews has woken up to an atmosphere of refreshed hope in Victoria and with a great gift — the power to do good, given to him by an electorate sick and tired of politicians breaking bad, breaking offensive bellicose wind, ripping us off and locking us out of the system.

It is fitting that the Palestinian-born St Andrew, brother to St Peter, the 'Rock' of the Church, continues to cause controversy between those who claim him.

Upon meeting John the Baptist, later beheaded on the whim of Salome as a gift from King Herod for her arousing Dance of the Seven Veils, St Andrew was converted and became Christ's first apostle. He was later martyred and, on his own request, asked to be tied to a diagonal cross, in deference to Christ being nailed on an upright cross. Or so the story goes.

It could be a fitting metaphor for Victoria's 48th Premier-in-waiting, Daniel Andrews and Labor.

Under former Premier John Brumby, Labor was dumped by the electorate in November 2010 with a 6.2% swing against them.

But incoming Liberal Premier Ted Baillieu and then his replacement Premier Denis Napthine and invisible National Party colleagues squandered the trust of the Victorian voters, resulting in being turfed yesterday.

Ironically, not since 1955 under Labor's John Cain Snr (also prompted by what is known as the  Great Labor Split) has there been a one-term government.

Daniel Andrews need to ensure that he won't be responsible for shortening the record this time around for Labor.

NOT TO MENTION EAST WEST LINK IN  VICTORY ADDRESS.

This election was in part a referendum on the East West Link. Andrews has loudly promised to kill it. Thousands of Victorians would undoubtedly have voted for Labor and the Greens, in order to stop the EWL and to get our statewide public transport on track. I can't use the phrase 'back on track' because for decades it's been derailed and mismanaged.

But it must be noted that in his fine victory speech that night, there was a glaring omission by Andrews, who failed to mention the East West Link at all.

He said he had other priorities. Bollocks.

He could easily have acknowledged the will of the people and it was a serious fail that he did not.

It informs us that when the hour came, Andrews had neither the courage nor the confidence to fully own the moment and even broach key election promise.

A pity. Sure, he has since confirmed he will keep this promise, release documents and affirmed others.

We already have a portent of things to come, now that Dan is in the lion's Den.

What the Deputy Premier said last night as the Coalition was swept out of power after a single term. #auspol #vicpol pic.twitter.com/iQNTk1RBYG