It all seems worn, part of an "aspic" approach to foreign policy. But U.S. President Joe Biden is keen to ensure that old, and lingering mistakes, retain their flavour.

Towards Cuba, it is now 60 years since President John F. Kennedy’s Presidential Proclamation 3447 imposed an embargo on all trade with the island state.

The proclamation was packed with Cold War righteousness and much sanctimony.

Cuba under the revolutionary Fidel Castro, fresh from overthrowing a Washington favourite and blood-smeared thug, Fulgencio Batista, was:

'... incompatible with the principles and objectives of the Inter-American system [the U.S. was] prepared to take all necessary actions to promote national and hemispheric security by isolating the present Government of Cuba and thereby reducing the threat posed by its alignment with communist powers.'

A year later, Kennedy invoked the Trading with the Enemy Act with the purpose of expanding the scope of the embargo, covering trade, travel, and financial transactions except those licensed by the Secretary of the Treasury, as directed by the President.

Prior to inking the prohibition of the importation into the U.S. of all goods of Cuban origin and all goods imported from or through Cuba, Kennedy had a particular vice that needed feeding. The resourceful Press Secretary Pierre Salinger was ordered to scour Washington and gather as many Cuban cigars as he could by the morning. The mission was a success: 1,200 cigars were found.

Acting with suitable presidential hypocrisy, Kennedy could then authorise the proclamation.

“Kennedy smiled, and opened up his desk.  He took out a long paper which he immediately signed.  It was the decree banning all Cuban products from the United States. Cuban cigars were now illegal in our country.”

It was very much in keeping with Kennedy’s own family’s tradition of self-enrichment and opportunism.  His father, Joe Kennedy, used his efforts in the latter part of 1933 to nab British importation acts to distribute a range of spirits, including Gordon’s gin, Haig & Haig scotch whiskey and Dewar’s. Father Kennedy’s nose had picked up the right political scent: the disastrous era of Prohibition was coming to an end, and he was hardly going to miss out on capitalising on it.

By the end of 1934, net profits had quadrupled.

The embargo began a series of justifications and rationales for a venal system that has proven to be bankrupt and, in large measure, ineffective. Cuba has been the hemisphere’s villain so designated by the biggest of them all, at various points condemned for its relationship with the Soviet Union, its socialism, human rights abuses, and its lending of support for revolutions in Africa and Latin America.

Even before Kennedy came to power, the Administration of Dwight D. Eisenhower had concluded that the Castro regime could only be deprived of its support “through disenchantment and disaffection based on economic dissatisfaction and hardship".

The April 1960 memorandum from Deputy Assistant Secretary of State Lestor D. Mallory, seeking to justify an unlawful interference in the affairs of a sovereign state, suggested that such policies be adopted in an 'adroit and inconspicuous' way to make 'the greatest inroads in denying money and supplies to Cuba, to decrease monetary and real wages, to bring about hunger, desperation, and overthrow government'.

This, in the argot of international relations, was the language of war.

At points, U.S. officials could pettily gloat about the various effects of the embargo. The prohibition of food sales to Cuba during Lyndon B. Johnson’s Presidency (Kennedy had exempted them) saw a delighted Gordon Chase, member of the National Security Council staff between 1962 and 1966, praise the “effective control over lard supplies".

Cuba had resorted to importing “an inedible product from the Netherlands and then turn into an edible product. It is low quality and the Cubans don’t like it".  A truly mighty outcome.

The sanctions regime has, for the most, been in place for six decades. There have been brief spells of tinkering. In 1975, for instance, the embargo on trade between Cuba and the companies of U.S. subsidiaries working in third countries was lifted.

Two years later, under the Carter Administration, the complete travel ban was lifted and remittances to family members based on the island were permitted. 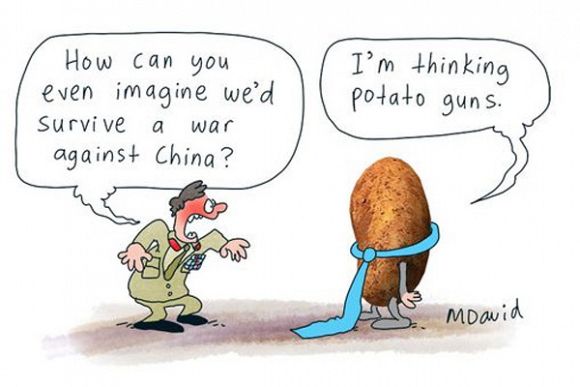 Tensions with China resulting in economic sanctions are the result of Australia's blind allegiance to the USA that began decades ago.

But more typical were the apoplectic responses such as that of President Ronald Reagan, who re-imposed the travel ban and placed Cuba on the U.S. State Department’s list of State Sponsors of International Terrorism. Both Presidents George H.W. Bush and Bill Clinton pushed the democratic fetish with some aggression, including the Cuba Democracy Act and the Cuban Liberty and Democratic Solidarity Act. This was hemispheric gangsterism in plain sight.

In 1982, despite admitting that the sanctions had initially done significant damage to “Cuba’s growth and general development”, a CIA case study had to concede that the embargo had fallen short in meeting its objectives. Cuba’s capital base had diversified, making use of Soviet, East and Western European, and Japanese machinery and equipment.  Havana had guilefully resorted to front companies “to obtain various types of US products, particularly consumer goods”.

While falling short of admitting it had been a crude failure, the same study prosaically remarked that Castro’s position remained unchanged:

“Sanctions implied a grave external threat, which Castro exploited to carry out the radicalization of all Cuban political, economic, and social institutions.”

In 2012, at the five-decade point of U.S.-Cuba sanctions, the Obama Administration made some modest concessions to allowing U.S. businesses to establish themselves in Cuba. This policy shift had its own Trojan Horse element to it.

“By further easing these sanctions,” U.S. Treasury Secretary Jacob Lew reasoned at the time, “the United States is helping to support the Cuban people in their effort to achieve the political and economic freedom necessary to build a democratic, prosperous and stable Cuba".

On 17 December 2014, President Barack Obama announced that he would be “ending an outdated policy that had failed to advance U.S. interests and support reform and a better life for the Cuban people on the island over several decades". The new normalisation policy would increase engagements between Washington and Havana in “areas of mutual interest, and increase travel to, commerce with, and the free flow of information to Cuba".

Rabid opponents foamily insisted that no measure should aid this satanic Communist State. 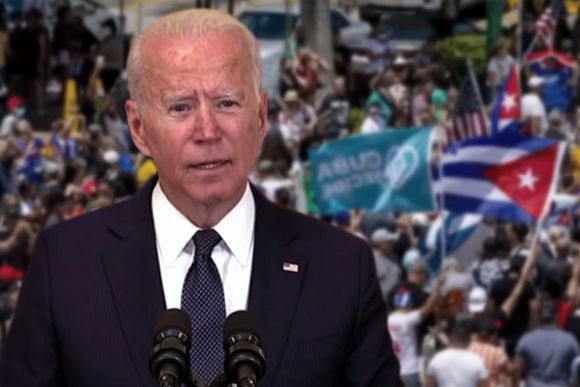 The recent anti-government protest highlights the problems facing Cuba but the question of why and where the blame lies needs once more to be addressed.

The Trump Administration proceeded to reverse what adjustments had been made to the U.S.-Cuban relationship. Individual travel by U.S. citizens to Cuba for educational and cultural changes was prohibited. Most functions of the U.S. embassy in Havana were suspended. Donald Trump even went so far as to deem Cuba a state sponsor of international terrorism under the Export Administration Act.

President Joe Biden has shown an almost soporific lack of interest in challenging the sanctions regime.  When it has acted, it has kept the system in place, going so far as to impose specific sanctions on Cuban security and interior ministry officials. Responding to claims of Cuban Government brutality in suppressing protests, Biden declared last July that the “United States will continue to sanction individuals responsible for the oppression of the Cuban people".

Some members of that mendacious class known as Congress are urging a trimming of sanctions, though their views remain modest and calculating in the name of benevolent self-interest.

In mid-December, 114 members or so sent a letter to the President calling for 'humanitarian actions' to lift economic sanctions on food, medicine and other forms of humanitarian assistance.

'Engagement is more likely to enable the political, economic and social openings that Cubans may desire, and to ease the hardships that Cubans face today.'

Whichever group in Congress is consulted, from the vociferous Cuban American lobby in Florida to the claimed progressives in the metropolitan centres, all agree with one objective, however achieved: regime change.

The hemispheric gangster is simply biding its time.