THE STATES IN THE USA which have most avidly supported soon-to-be-ex-President Donald Trump have paid a heavy price for their fealty. Deaths from suicide, gun violence and the COVID-19 pandemic have been much higher there than where Trump’s toxic authority has been rejected.

Few other leaders of advanced democracies have denied the science on the COVID-19 pandemic as has Trump. Few, if any, have disregarded the human cost of economic mismanagement.

No other American president has urged his supporters to lash out against political opponents with violence as vehemently as has Donald Trump.

There is no ready measure of physical assaults motivated by political enmity. But firearm violence is recorded by Gun Violence Archive and others. This has increased significantly under Trump.

Mass shooting incidents in 2020 have increased by a staggering 45.8% over 2016 — up from 382 to 557. That’s just to 11 November. The year is not yet over. (The definition of a mass shooting in this database is an event resulting in four or more deaths or injuries.) 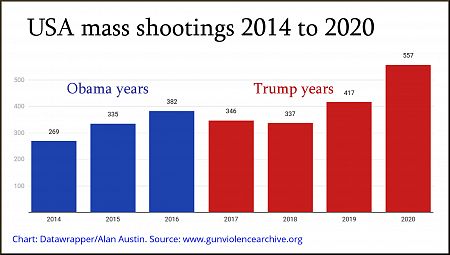 The 50 U.S. states can readily be divided into those which voted for Trump in the 3 November Presidential Election and those which supported President-elect Joe Biden. There were 25 of each.

The latest data from the Centre for Disease Control for 2018 shows Trump-supporting states had much higher rates of firearm deaths. Biden states overall recorded 9.9 deaths per 100,000 population. The Trump states recorded 15.1. The highest six states all went for Trump, as did 14 out of the worst-hit 16. See graph, below. 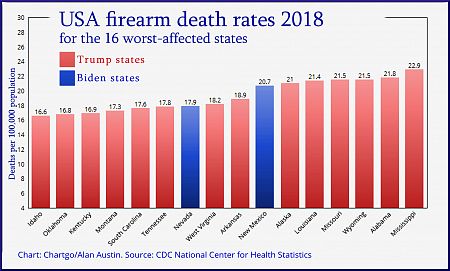 Deaths from the COVID-19 pandemic

A strikingly similar pattern emerges with current coronavirus deaths. Since infections surged in September, there have been 88,199 fatalities in the 50 states. Deaths in the Trump states are running at 235.7 per million population. In the Biden states, just 130.8.

Of the worst-hit 20 states, 17 are Trump states and three are Biden’s. See blue graph, below. 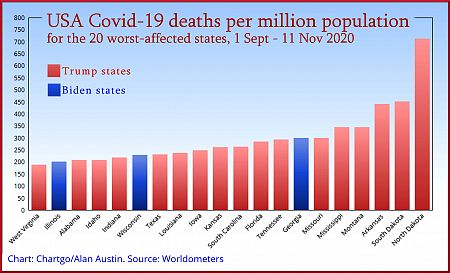 Exports from the USA began to decline in 2017 when Trump abandoned several trade treaties and imposed unilateral tariffs. Worst affected were primary producers who, in record numbers, have lost their savings, forfeited their farms and taken their own lives.

A damning report into the impact of Trump’s trade wars has just been published by the US-China Business Council.

We do not have separate data on suicides among farmers, nor do we have data more recent than 2019. But we do have analyses reporting the dramatic increase in rural suicides from Forbes, Newsweek, The Atlantic and The New Republic. These draw on data and testimony from the National Farmers Union, the American Farm Bureau, clinical psychologists and others. 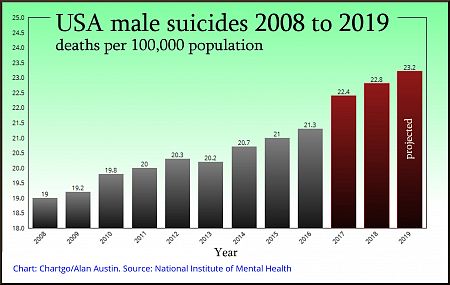 Mortality in the United States is clearly greatest in those communities which have embraced Trump’s destructive values. Why they have done so is not so clear.

Mike Rosmann, a clinical psychologist specialising in farmer stress in Iowa, does not know either:

Farmers are becoming dismayed about the tariffs. He knew that he needed to take care of people who voted for him and the farm population, by and large, voted for him. But Trump administration policies fly in the face of what is needed... I don’t understand why farmers support him, or why many people support him, because what he’s doing actually hurts them.

Trump will soon quit the Presidency. We shall then see if this ends his deadly influence on the Republican Party and the nation.

8 March 2021, 7:00am The latest GDP figures show Australia’s current economic mismanagement is the ...

7 March 2021, 7:00am As the coronavirus pandemic enters its second year with only patchy signs of ...

1 March 2021, 7:00am The submarine deal France proudly called 'the contract of the Century' appears to ...
Join the conversation
comments powered by Disqus
News updates