The idea that America’s President is a fascist was initially met with derision and although resistance to that idea has perhaps softened as we’ve witnessed Trump in action, the Nazi analogy still mostly fails to stick.

It might be time to put that aside. This week, a whistle-blower filed a complaint alleging widespread medical malpractice at a local Immigration and Customs Enforcement (ICE) detention facility, including an alarmingly high level of hysterectomies performed on Spanish speaking detainees.

Dawn Wooten, a nurse working at Irwin County Detention Centre in Georgia, has alleged that the facility under-reported COVID-19 cases and refused to test detainees showing symptoms. This put staff at risk of catching the virus and neglected legitimate medical complaints from those in custody. One detainee characterised conditions at the facility as resembling ‘an experimental concentration camp’. 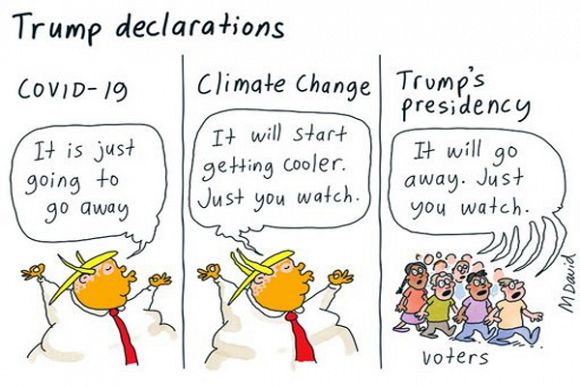 Following President Trump's erratic behaviour in the lead-up to the November election, focus is now on what might happen in a potential loss.

Trump’s border policies have breached so many international and American laws that it’s hard to keep up, but the hysterectomies aspect to the complaint grabs the attention. Without consent, a hysterectomy is a form of forced sterilisation — a practice quite familiar to the Nazis.

Wooten’s account, which has been corroborated by other members of staff, says that many of the women didn’t appear to understand what was happening to them. Diagnoses apparently requiring surgery weren’t properly checked and that the operations often were the result of complaints about something as relatively commonplace as heavy menstruation. Wooten described the doctor performing the procedures as ‘the uterus collector’.

This is just the latest in a long list of horrific Trump Administration policies aimed at Mexicans, Latinos and brown-skinned immigrants. Thousands of children, some of them infants, have been forcibly separated from their parents, kept in wire cages and placed into a system that lacked the resources to adequately trace every parent and child, meaning some families may never be reunited. Around 5,000 children have complained of sexual assault or harassment whilst in U.S. custody.

Trump’s much-hyped border wall may be mostly symbolic, but the President has openly fantasised about flesh-tearing materials on top of it, gassing or shooting people climbing over it and, as if channelling Dr Evil, a moat containing alligators or snakes behind it.

All this would be frightening by itself, but it’s clear that Trump’s animus isn’t hyper-nationalism directed towards illegal immigrants, but politically motivated racism aimed at brown-skinned people in general. Trump has repeatedly used the DREAM Act (which offers a pathway to citizenship for illegal immigrants who entered the U.S. as minors) as a political tool to advance his immigration agenda.

He has deployed ICE agents to conduct domestic raids in American cities and taken steps to deport people who have lived in America their whole lives, including those with medical conditions that make deportation a practical death sentence.

Every far-right leader needs a group to demonise, to blame for society’s ills and to vilify before the baying mob. As a candidate, Trump said that Mexicans were bringing drugs, crime and rapists.

As President, he has continued to display a chilling degree of bloodlust towards America’s southern border. But if you think shooting people at the border, child separation and forced sterilisation are appalling, remember Trump has said he’d like to employ measures that are "ten times as bad".

And this is just what we know. Time and again we’ve found that behind closed doors Trump voices much more violent or insane fantasies and is often barely constrained by those around him. We’re less than fifty days from an election in which the incumbent has a good chance of winning (or at least retaining power).

Trump, whose most fervent backers are adherents to the message of Jesus, has institutionalised the brutalisation and sexual assault of children. His Administration now appears to be conducting a program of forced sterilisation on brown-skinned women. What would "ten times as bad" look like during another term of office? Would the Nazi analogy continue to be imprecise?

It’s easy to become emotive when considering how evil you would need to be to take a toddler from its mother and to disregard a child in your custody’s safety so badly that he or she is sexually assaulted or raped. Trump is not Hitler, but the fact remains he appears entirely devoid of human empathy and has presided over a systemic program of mass human rights violations aimed at immigrants. His policies are not guided by efficacy. As journalist Adam Serwer put it, ‘the cruelty is the point’.

A second Trump term is likely to confirm something I’ve argued since 2015: that the political right in America is the most openly fascistic movement the world has seen since the Second World War. Fascism doesn’t start with mass extermination, it ends with it. Forced sterilisations and doctors called "the uterus collector" are just steps along the way. America is a nation on the brink of the abyss.