Despite what Margie Abbott might say, a man with three daughters and a gay sister is not necessarily a feminist, says Sarah Burnside. 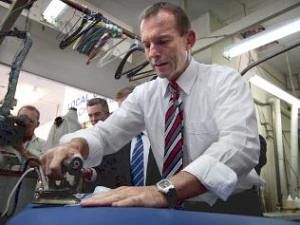 THERE'S AN election coming up, and operation Humanise Opposition Leader is well underway.

The drive to present Tony Abbott in a warmer light was most recently evidenced in his much-discussed appearance on 60 Minutes, which saw him discuss his relationship with his gay sister, Christine Forster.Recall also Margie Abbott’s declaration last October that her husband ‘gets women’. The nation learned that Tony was essentially ‘a softie at heart who cries in movies and helps with the housework’, and Margie asked rhetorically:


‘Do you want to know how God turns a man into a feminist? He gives him three daughters.'

Earlier this year, Abbott’s Chief of Staff Peta Credlin (who has been credited with softening her boss’ image by ‘getting his wife and daughters to participate in more of his media appearances’) explained in an interview with Marie Claire that Abbott supported her attempts to conceive through IVF and that his views on issues such as contraception and abortion were more nuanced than his public image would suggest. As Anne Summers noted, Credlin was


"...the third woman in Abbott's life…coming forward to plead that the Tony we know from his public utterances is not the 'real Tony'."

It is fairly obvious, of course, that if having daughters did automatically make men feminists, the course of human history surely would have been radically different. Trifling matters like giving women the vote and the right to own property, and criminalising rape in marriage, would have been dealt with much earlier and less grudgingly than they were.

Questions around Abbott and feminism have already had considerable traction, however, and I don’t want to focus on them here. Instead, I’d like to look at the broader notion that because someone has daughters, a wife and valued female colleagues, they can by definition not be sexist, or that because they have gay family members, they cannot be homophobic — a twist on the old ‘I have a black friend’ defence to accusations of racism.

This notion rather oddly adopts the conservatives’ old bête noire–‘identity politics’– by proxy, such that the question of who we love, or with whom we associate, is said to define our political leanings. This development is passing strange: conservatives who have traditionally rejected the idea that Australians are divided by race, gender, class or sexuality have opportunistically embraced this concept to bolster their credentials; recall Abbott’s clumsy statement last May that


"...as someone whose grandparents were proud to be working class I can feel the embarrassment of decent Labor people at the failures of this government."

Clearly, where we sit in life will influence where we stand on particular issues; you don’t have to be a doctrinaire Marxist, for instance, to observe that your economic position will help to determine your attitude to taxation and redistributive spending. As John Kenneth Galbraith noted in his classic book The Affluent Society, with ‘comparatively rare and eccentric exceptions’, the wealthy had opposed the ‘suggestion that the rich should…share their wealth with those who are not’. Galbraith commented that the


'...grounds have been many and varied and have been principally noted for the rigorous exclusion of the most important reason, which is simply the unwillingness to give up the enjoyment of what they have.'

The insight that the personal is political is an old one, and it comes from the left. More recently, in his 2001 book Stupid White Men, activist and filmmaker Michael Moore observed that there was ‘nothing more lovable than an unembarrassed hypocrite from the Right’, noting for instance that


‘...in New York City, Republican mayor Rudolph Giuliani, who for years opposed the city paying for health care for uninsured children, did an abrupt about-face – after he came down with cancer’

and that Dick Cheney


‘...quietly halts any antigay initiatives that may come from the White House…because his daughter is a lesbian.'

Accordingly, Moore wrote a tongue-in-cheek ‘prayer to afflict the comfortable’, including ‘make the children of every senator in the Mountain Time Zone gay - really gay’ and


‘...put the children of senators from the East in a wheelchair and the children of senators from the West in a public school’; and the fervent hope that ‘all white leaders…who believe black people have it good these days be risen from their sleep tomorrow morning with their skin as black as a stretch limo so that they may enjoy the bountiful fruits of being black in America.’

This was funny, cutting stuff, suggesting that when the wealthy and powerful cannot opt out of the circumstances that affect the rest of society, they are forced to adopt a more progressive position. However, it was somewhat optimistic and misguided.

A conservative might care about his kids’ public school, or the hospital in which her sick relative is being treated, while not giving a fig for the facilities used by others; one might pull strings to ensure that one’s gay children do not suffer discrimination while holding fairly troglodyte views on human sexuality more generally. Equally, a proud father and conscientious employer might devoutly hope that his daughters – and his female colleagues – have every advantage in life, while not bothering himself overmuch about other women with whom he has no emotional connection. Not all women are feminists — why should we expect men with wives or daughters necessarily support dismantling the patriarchy?

Reliance on the personal discounts both ordinary human selfishness and, relevantly, the more specific Thatcherite (and neoliberal) view that, in any case, ‘there is no such thing as society’, just ‘individual men and women, and…families’.

Have we given up on the possibility of altruism?

The current round of publicity about Tony Abbott is not novel, for modern election campaigns tend to focus on personalities and stunts, but it should give us pause for thought about the way we view intersections of the personal and the political.

(You can read more by Sarah Burnside on her blog 'Maintain the Beige'.)

25 February 2013, 12:29pm Opposition to divisiveness is a recurring theme for Tony Abbott, however Sarah ...

11 February 2013, 8:46am Words are important, says Sarah Burnside — and using some of the darkest epis ...
Join the conversation
comments powered by Disqus
News updates