ISRAEL’S OPERATION PROTECTIVE EDGE began on the 8th of July. There have been several brief humanitarian ceasefires; but the bombardment of the Gaza Strip continues with extreme vengeance.

In the current bombardment and military ground incursion, at time of writing, over 1,360 Palestinians have died and over 6,000 have been injured so far.

On 17 July, Russian separatists in the Ukraine shot down Malaysian airliner MH17. It was mistakenly identified as a Ukrainian cargo plane as it flew over a war zone. The death toll was 298.

Both these events are immensely sad. However, Prime Minister Tony Abbott, seems able to pay attention to only one of these tragedies. In stark contrast to the attention he has paid to the MH17 tragedy, Tony Abbott ignores the suffering in Gaza.

Considering the incessant, breathless statements, interviews and regular updates and calls for accountability being offered in the wake of the  MH17 airline loss, the contrasting lack of empathy and concern for the dead and injured in Gaza, is breathtaking.

Until the recent announcement by Julie Bishop of  $5 million in humanitarian aid to the people of Gaza, the Abbott Government has shown no concern for the plight of Palestinians.

Fairfax reports that 27 Greens and ALP parliamentarians have condemned

'... the ongoing Israeli military bombardment and invasion of Gaza.'

Julie Bishop has at last issued a limp statement on behalf of the Government, expressing

"...deep concern about the violence in Gaza."

But where is Tony?

In 2012, as leader of the Opposition, Tony Abbott declared to the Australian Jewish News.

“In so many ways, [Israel is] a country so much like Australia, a liberal, pluralist democracy,” he said, “A beacon of freedom and hope in a part of the world which has so little freedom and hope.”

He added that Australians “can hardly begin to comprehend” the existential threat Israelis live under.

“It is so easy for us in Australia to get moral qualms, if you like, when we read about Israeli actions in – on the West Bank for instance – or Israeli involvement in Lebanon.”

Abbott was pictured (top right) wearing the traditional Yarmulke, or scull cap, for the occasion and endorsed Israel’s right to defend itself, without any caveats.

It was redolent of his dismissal of our Sri Lankan human rights abuses and torture last year:

Yesterday, Israel bombed a declared UN school shelter, killing sleeping children — despite being warned 17 times by the UN of the shelter's refugee status.

Like an echo of the famous Harold Holt speech that supported expanded involvement in the Vietnam war: “all the way with LBJ”,  Abbott has declared:

"When Israel is fighting for its very life, well, as far as I’m concerned, Australians are Israelis. We are all Israelis.”

In a surprising departure from their usual style, Tony Abbott and Julie Bishop are traversing the Elizabeth Kubler-Ross stages of grief. Both have declared, feelings of shock, outrage, sadness, and anger.

Can we hope that humanity resides in the cold heart of the Abbott Government, despite its cruel policies on refugees and a horror budget that punishes the vulnerable? Or is this merely a politically induced flash in the pan?

But while Abbott is silent on Gaza, others are speaking.

In contrast, Tony Abbott extended his condolences to Israeli Prime Minister Benjamin Netanyahu for the deaths of Israelis.

No condolences have been offered regarding the deaths of Palestinians — one third of whom are children.

Attorney General George Brandis rejected the term ‘Occupied Territories’ for East Jerusalem as "controversial and tendentious", despite UN and general international consensus on this designation. This was seen internationally and by Israel as signaling support for Israel and a downgrading of support for Palestinian rights.

In an interview on July 17th on 3AW after lengthy discussion of the Malaysian MH17 tragedy, Tony Abbott refused to be drawn on any comment about Gaza:

“Well, as you can imagine Neil, I’ve been rather preoccupied this morning with the matter involving at least 23 Australians who have died on an aircraft, which has been apparently shot down by Russian-supplied missiles. Now that, if you don’t mind me saying so is, I think, of higher priority than offering commentary on something that doesn’t directly involve Australians.”

But Australians are "involved" with Israel and the Palestinian territories.

For decades, Australians have served in the Israeli Defence Force. It is common for hundreds of young Australians to spend time in Australian Zionist groups developing a strong identification with Israel. A year spent post high school in Israel is called making Aliyah.

An estimated 45,000 of the Palestinian diaspora live in Australia. Many Australians who were recently advised to evacuate from Gaza have dual citizenship and family in Gaza.

Today, the killing has recommenced and Netanyahu has declared:

“There is no war more just than this.”

He states that only Hamas is to blame for the civilian deaths in Gaza.

But the root of the problem is that the creation of the state of Israel has led to the displacement and occupation and oppression of the indigenous Palestinian inhabitants —the result is ongoing violent conflict.

It must be emphasised: this is not a conflict between equals.

Criticism of Israel frequently incurs the accusation of anti-Semitism.

Many Jewish people, including my family, suffered the horrors of genocide.

Surely the Jewish diaspora – Israelis and anyone with a shred of humanity – must condemn this re-enactment upon the Palestinians of the displacement, injustice and brutality suffered by Jews.

The fascist boot is now on the other foot, as Netanyahu threatens a “prolonged” army operation in Gaza.

The holocaust of Palestinians continues as Israel insists that it doesn’t target civilians. 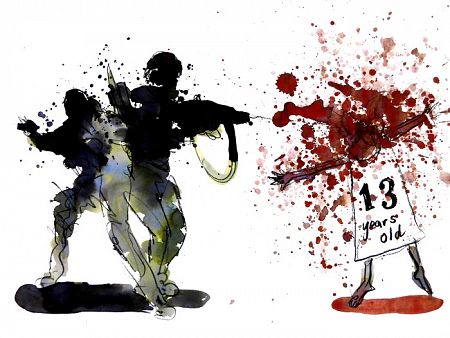