Tony Abbott and the "slit your throat" staffer scandal

Tony Abbott’s integrity and honesty have again come into question over his response to the "slit your throat" staffer scandal. Managing editor David Donovan investigates.

THE DOUBLE STANDARDS of the Abbott-led Coalition and their ardent urgers ‒ Australia’s old media ‒ have sprung into view yet again through the comments and actions of Abbott over a senior staffer — Dr Mark John Roberts. Once again, Abbott’s initial comments and then subsequent backtracking reveal a politician with highly questionable ethics and a fast and loose interpretation of the truth.

The story begins at a Qantas dinner last Thursday night. News Ltd journalist Peter van Onselen and his wife were having a quiet chat to the chief executive of the charitable Australian Indigenous Education Foundation, Andrew Penfold and his wife, when over stumbled Tony Abbott’s 36 year-old policy director — the obviously inebriated Mark Roberts.

The drunken staffer proceeded to verbally abuse and threaten grievous bodily harm on Penfold, a former Australian of the Year finalist.

A Tony Abbott staffer told an eminent Australian that he would "cut his throat" once "we" are in government.... Much, much more to it...

Roberts backed up his verbal threat, allegedly, by also making a “throat slitting” gesture with his hand.

Penfold was said to be taken aback by this but showed no animosity towards Roberts.

Van Onselen later told SkyNews the “slit his throat” gesture referred to cutting funding for Penfold’s worthy organisation – which reportedly provides scholarships for 2,000 Indigenous children and supports others in financial need – upon the Coalition gaining office.

After realising van Onselen had overheard the ugly exchange, Roberts then tried to bribe the reporter to stay quiet by becoming a mole for him in Abbott’s office, something PvO rejected.

Van Onselen said the following about this on Twitter:

Abbott's staffer knew I heard the conversation, bailed me up & offered to be a source inside TA's office if I stayed quiet...thanks, but no.

In the immediate aftermath of the incident, Abbott tried to downplay its severity by denying the particular phrase about “throat cutting” had been used, saying that the unnamed staff member had been “counselled” and by stubbornly asserting that “the matter was now at an end”.

However, the incident began to blow up in the media on Friday as the identity of the staffer became public. Abbott’s office issued then another statement saying the matter had been investigated by Peta Credlin and that Roberts had apologised and been demoted.

Abbott’s attempts to backtrack and revise his initial statement were reported by BigPondNews:

Mr Abbott defended his actions in initially trying to close the matter down before an investigation was carried out and he had all the facts.

In his first press conference responding to the incident, Mr Abbott said the 'matter was now at an end.'

Mr Abbott admitted his chief of staff hadn't had a 'viva voce' conversation with Mr Penfold before his first press conference.

'I was confident on the basis of what I had been told at that stage,' Mr Abbott told Mr van Onselen's program on Sky News on Sunday.

'While it was a very unfortunate incident and highly unprofessional it was an entirely booze-fuelled eruption.'

Mr Abbott described the staffer's behaviour as a 'complete brain snap' but it was not the 'worst thing anyone had ever done in the world.'

'He's paying a price for it now,' Mr Abbott said, adding that he deserved a second chance and it shouldn't be the 'end of his life or career.'

Abbott was also reported in that same story as saying Roberts had lost his title as director of policy and was going to receive a pay-cut.

Later, however, the Opposition Leader backtracked on the pay-cut idea, saying “red-tape” had stopped him from cutting Roberts pay.

There are a number of issues here.

Firstly, Abbott admits that Credlin had not spoken to Penfold — presumably to get independent confirmation about the veracity of the throat cutting statement, rather than simply from Roberts.

Van Onselen, however, was emphatic that the statement had been made:

Wow the staffer in Tony Abbott's office is denying the form of words that he used. A number of people heard it so that's interesting.

'I was confident on the basis of what I had been told at that stage,'Abbott had said — but how could he have been confident if he had only spoken to the accused party? Unless Abbott is entirely credulous, implicitly believing everything he’s told ‒ hardly a good trait in a prospective prime minister ‒ then that was simply a lie.

The highly provocative throat cutting statement was made, of that we can now be very sure given Abbott’s backtracking. IA has been attempting to contact Andrew Penfold to gain further confirmation, although given Roberts’ threats of payback, it would be quite understandable should he seek to avoid any further publicity about this matter.

Abbott would be aware that there is a history of Liberal Party staffers and hangers-on using violent hatespeak against their opponents, such as former Howard chief-of-staff Grahame Morris saying Prime Minister Julia Gillard should be kicked to death.

Abbott himself has been accused of punching a wall either side of a political opponents head. Knowing this, he tried to shut down media scrutiny by, as he has done so many times before, fudging the truth.

According to one source, who described Roberts as a "piece of work", the staffer has

‘... a problem with alcohol. Turns nasty when he's on the sauce. I'm sure they've banned him from attending gigs from now on.’

IA has endeavoured to contact Tony Abbott to gain a clarification about his description of Roberts behaviour as being “out of character”, but so far we have received no response.

Thirdly, Abbott stated that he was unable to cut Roberts’ pay because of bureaucratic red tape, an assertion that also appears to be highly questionable:

''We can't just cut people's pay,'' Mr Abbott said on Sunday. ''We are governed by the Fair Work Act, as everyone else is, and it's all quite complex, how you actually make these sorts of management decisions, but we're in discussions with the Department of Finance about that.''

But it has emerged that Dr Robert's pay packet could be shrunk under the guidelines that apply to Commonwealth Members of Parliament Staff Enterprise Agreement 2012-2015.

The guidelines suggest there is no protection for an employee who is demoted into a lower job classification as long as the pay bracket does not overlap their current position.

Cameron Roles, a lecturer at the College of Law, Australian National University, said a pay cut was possible.

The lies seem to be stacking up, but there are also, of course, questions of ethics and integrity — such as how does a staffer that physically threatens another person and then offers to be a spy for a prominent journalist get to keep his job at all?

And, even more importantly, what cuts to funding for Indigenous programmes are planned under a Coalition Government. Given some of our previous reports, Abbott’s true commitment towards Indigenous affairs must be drawn into question — Roberts’ statements compound these concerns.

None of these questions appear to have been asked by Australia’s dormant mainstream media.

Nor have they asked Abbott how it is that he can demand the resignation of Peter Slipper over a text message to a friend before he became Speaker, and before that friend became his employee, yet won’t demand the resignation of his own staffer who, in an alcohol-fuelled rage, physically threatened a prominent Australian? Or how it is that Abbott will run from the chamber rather than accept the “tainted vote” of Craig Thomson ‒ someone who has not been convicted of any crime nor ever physically threatened a soul ‒ yet will happily accept the services of an angry and abusive drunk.

In effect, Abbott’s actions in not sacking Roberts serve to endorse violent drunken confrontation and threats of political retribution. This has disturbing implications for us all.

Van Onselen, of course, had the opportunity to probe Abbott about this affair on Sunday, but avoided the topic until almost the end of the interview, and then he merely brushed lightly over the affair.

This was accurately predicetd by many, given van Onselen being employed by Tony Abbott’s primary urger — Rupert Murdoch.

The Opposition leader’s double standards and hypocrisy are well known — for instance how could he contemplate keeping Mal Brough as Fisher candidate after the Federal Court declared him a political conspirator in the Ashby case? But it is the easy ride and lack of genuine scrutiny given to him by Australia’s mainstream media that should cause us all the most concern. By them not holding him to account, Australia runs the risk of having an unprincipled prime minister with an aversion to honesty holding the reins of power.

At time of publication, we still have no response from Abbott’s office. You can read the questions we asked him here: 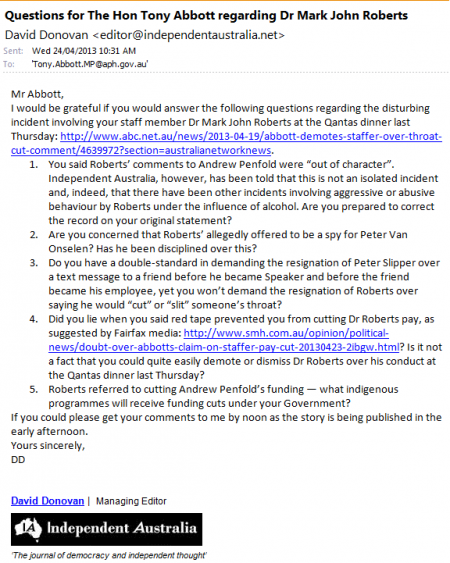 For more about Andrew Penfold's work with Indigenous Australians, watch the below video: