Tony Abbott and the sin of omission

Tony Abbott was criticised by what he said in his speech on forced adoptions, but it was what he didn't say that most revealed his character, says Gordon Aplin. 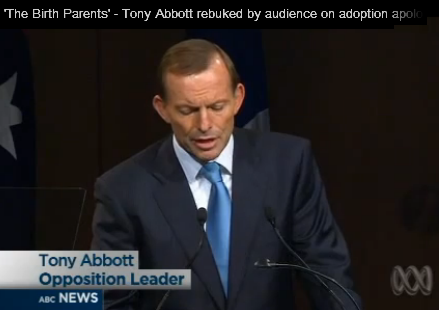 On 21 March 2013, Prime Minister Julia Gillard delivered an eloquent and momentous apology to those hurt and betrayed by forced adoptions.

Opposition Leader Tony Abbott also spoke on this significant occasion, but the day was marred by the turbulent events of the non-leadership challenge. Consequently, a crucial part of Abbott’s speech was overlooked.

I’m not talking here about the leader of the Opposition’s insensitive use of the term ‘birth mother’ which upset many in the audience and showed his lack of empathy as well as his apparent inability to read important documents.

It should be noted, however, with respect to that issue, that there is a whole section on the ‘language of adoption’ in the introduction to the Senate’s report: Commonwealth Contribution to Former Forced Adoption Policies and Practices.


1.9 Adoption is a difficult subject to write about in a manner acceptable to everyone affected by it. Forced adoption even more so. Mothers who were forced to give up children for adoption generally reject the terms 'birth mother' or 'biological mother', and some reject 'natural mother'. The preferred term is often simply 'mother'.

Therefore, had Mr Abbott, or his speech writer, taken the trouble to read this document he would have been well aware of the potential insult he was delivering to the mothers in that venue and to those around Australia watching on television. (For more on this issue see Barry Everingham's article on Independent Australia)

The Australian (online) newspaper reported on 21 March 2013 that:


“The Opposition Leader joined Julia Gillard today in apologising to parents and children affected by past forced adoption practices by churches, charities and governments in the 1950s, 1960s and 1970s.”

That statement is incorrect, as Mr Abbott, unlike Julia Gillard, did not apologise to parents and children affected by past forced adoption practices by churches.

In his speech [Warning, this link will take you to the Liberal Party website] Mr Abbott stated:


“It should never have been presumed – presumed – that some mothers were incapable of raising their child because, as everyone here knows only too well, there was presumption and there was coercion: by families, by charities, by peers, and by the conditions that governments placed upon people.”

Note that he specifically excludes churches from the list of coercers and by so doing absolves them of responsibility, or at the very least chooses to hide the involvement of religious institutions by subsuming them under ‘charities’.

In The Australian quote above, there is a distinction made between churches and charities, but Mr Abbott doesn’t want to go there. Given what we know about Tony Abbott and his faith we can only conclude that his decision to omit the role of the churches was no mere oversight.


“For a country, just as for a person, it takes a lot of courage to say we are sorry. We don’t like to admit we were mistaken or misguided. Yet this is part of the process of a nation growing up: holding the mirror to ourselves and our past, and not flinching from what we see. What we see in that mirror is deeply shameful and distressing.”

Tony Abbott failed this test of character, he flinched. He lacked the courage to hold a mirror to the ‘deeply shameful and distressing’ role of the churches in this matter.

How much would it have cost him to include the churches in his list of coercers? They clearly played a significant role in forced adoptions over several decades, but if you go by Mr Abbott's remarks their role wasn’t worth mentioning.

In this article, the leader of the Opposition is quoted as saying: 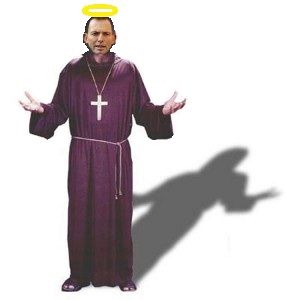 Judging Mr Abbott by the content of his forced adoption speech just ten days later, it is clear that his faith did dictate his politics. So he has failed his own test.

Isn’t the covering up of the role of the churches in cases of child sexual abuse one of the reasons we are having a Royal Commission? Why is Tony Abbott continuing to cover up for them in the matter of forced adoptions? Has he learned nothing?

If Mr Abbott becomes Prime Minister in September, can he be trusted to let the Royal Commission run its course? Or will he be guided by his faith and seek to influence the outcome by winding it up as quickly as possible to protect the churches from further investigation and disgrace?

Tony Abbott and the sin of omission

14 May 2013, 8:00am Tony Abbott was criticised by what he said in his speech on forced adoptions, but ...
Join the conversation
comments powered by Disqus
News updates