An accelerating shift towards accepting gay unions around the world is borne out by Tasmania’s vote in favour of same sex marriage yesterday, writes Alan Austin. 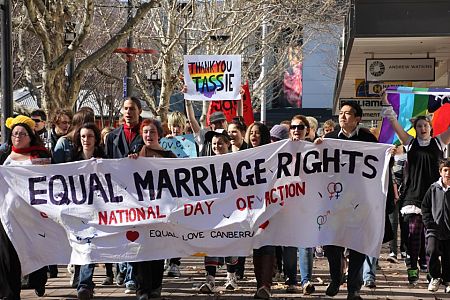 In Independent Australia in May it was suggested that the early months of this year saw a change in wind direction towards ecclesiastical reform, after blustery breezes last year.

To extend the metaphor, that wind has definitely picked up since, making scoring shots near impossible for conservatives.

The latest gust is the election of openly gay minister Gary Paterson as moderator of the United Church of Canada this month. The moderator is sort of like the Pope for Canada’s largest Protestant denomination.

Reform within the global Anglican community advanced this month when Bishop Alan Wilson of Buckingham become the most senior Churchman of England to join a movement supporting same-sex marriage.

“If you are gay, please don’t judge God by the Church,” the openly gay Dr John urged. “The official Church doesn’t speak with integrity on this issue and so, frankly, doesn’t deserve to be listened to.”

Officially the Church of England remains opposed to gay unions, as critics of the bishop and the dean were quick to assert.

In contrast, the Episcopal Church in the US has moved to offer blessings to same-sex couples. The US Anglicans accepted the reform by a decisive margin – 282 to 82 – at their June convention in Indianapolis. The 1.9 million-member church is now the largest US religious body supporting same-sex unions.

A shot at goal by New Zealand’s six Roman Catholic bishops this month was blown badly off trajectory. In a letter to ‘Kiwis of Generation Y’ they, condemned the proposed Marriage Amendment Bill, claiming it would “re-engineer the status and structure of family life in New Zealand”.

“It’s time the Church recognises and encourages those in same-gender relationships who wish to pledge their love and fidelity to each other,” the reformists replied.

“To suggest that marriage based on biblical precepts is frozen in stone and cannot develop or change is to ignore reality.”

This was eerily similar to the move by six Catholic bishops in Victoria in April, who wrote a letter opposing amendments to Australia’s marriage laws. This prompted a powerful counter letter signed by clergy supporting reform — which now has 77 signatures.

Shifts elsewhere may not be as newsworthy but are continuing. A Baptist minister in Victoria caused consternation when he backed same-sex unions on ABC Television in July.

“We actually need to look at it in terms of justice, of compassion, of equality for all people,” said South Yarra minister, Nathan Nettleton. “And so, I think the case would need to be made that allowing same sex marriage would actually be detrimental to the community in some way before I would argue that the State should legislate against it.”

He was rapidly slapped down by senior Baptists.

“The sentiments expressed by the Reverend Nathan Nettleton … do not represent the views of Australian Baptist Ministries or an overwhelming majority of Baptists in Australia and around the world”, said spokesperson Rod Benson.

Nettleton finds himself, however, in an expanding company of progressive Baptists, admittedly from a low base. Of the 77 signatories to the April open letter from Australian religious leaders, seven are Baptists.

Baptists certainly have articulate Biblical scholars arguing compellingly for a re-examination of the relevant Scriptures which they claim have been misapplied.

Another conservative group now challenged from within is the Orthodox Jewish community.

Charismatic rabbi Shmuly Yanklowitz announced earlier this year: “I’m coming out of the closet right now as an Orthodox rabbi who is a proud ally with those of LGBT orientation.”

Yanklowitz is one of several rabbis advocating a re-think of Jewish praxis in light of learnings from both science and Biblical scholarship.

“Judaism is more legally and philosophically complicated on this issue, but it is not so complicated that we should abandon our most basic moral compass,” Yanklowitz said.

“When anti-Semitism emerges, non-Jews must speak up. When homophobia emerges, heterosexuals must be active. I stand in solidarity with those in struggle, since Judaism values struggle and mandates that we support one another in our different struggles.”

The rabbi’s ‘coming out’ was welcomed by some, but as with most of Christendom, his remains a minority view. But for how much longer? And who cares?

This seems to be happening in several places. An analyst claimed last week that the once-powerful conservative Australian Christian Lobby in Tasmania has been rendered virtually impotent in that state’s marriage debate.

So no sign of any slackening in the wind.