Let's make America grate again, says contributing editor-at-large, Tess Lawrence, who fears Trump's win will embolden the far right on the world stage, including our own back yard.

WHITE LIVES MATTER MORE and America's election of Donald Trump as their 45th president-elect proves it.

It seems more white men once done with voting, ticked the box for The Orange Man than for Hillary Clinton. Orange is the new white.

Oh my. The USA has flipped the bird to the establishment, globalisation, government and Wall Street.

The eagle has crash landed.

The thinkable has happened.

It's not as if we weren't warned. All around the world, feral non-political types are unseating the old party unfaithfuls, upending membership trestle tables and smiting manifestos writ in stone and cobwebbed centuries that bear little if any contemporary relevance.

It's about nationalism. It's about patriotism. Let's make America grate again. Trump's win will unquestionably embolden the far right elements on the world stage and in our own backyard.

TO-DO LIST Item #5: Say it loud: "HILLARY WON THE POPULAR VOTE." A quarter-million more Americans wanted her, not him. This is not TrumpLand

Why waste years doing a political apprenticeship and working your way through the ranks as a careerist when, on the back of international fame and notoriety, you simply conduct the equivalent of an entrepeneurial corporate raid on an established political party that has lost its way and, clearly, its self respect.

Today it's Trump. In four years time it could be Kanye.

Already Trump has branded Pennsylvania Avenue his own. The ribbons were cut on the October 26 opening of the Trump International Hotel Washington, the converted beautiful Old Post Office, just down the road from the White House and the Capitol and already nearly booked out for the new Pesident's inauguration.

Don't confuse Trump with the Republican's Grand Ol' Party. The Donald simply commandeered the GOP as a surrogate womb to implant his presidential ambition.

The old parties just don't get it. And they certainly don't get their electorates.

Trump's rallies took on the demeanour of revivalist church meetings and evangelism; where he freely spoke in tongues foreign to coherent policies, all played against a backdrop of mutual sleaze slinging that included audio playback of Trump's sexual braggadociousness and admissions of his verbal and physical sexual abuse of women.

The third major candidate in the ill-spent presidential race was sex, sex, sex and more spam sex in the three-legged race to the White House. That's the naked truth. 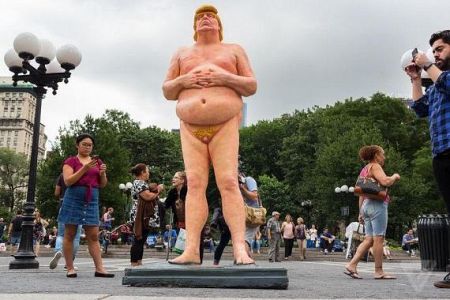 Build it and they will come. We believe an artist known as "Ginger" made this revealing statue of Trump, one of many replicated around the country under the auspices of American Activist Collective INDECLINE. A video of an artist making the statues was posted online on Sunday.

First it was Pussygate, then in the dying days of the campaign, it was Weinergate Unzipped; third time around.

Like some of our own politicians, Anthony just couldn't keep it in his pants.

Neither could the election black ops departments of the two ailing major parties, at war within themselves, each other and utterly out of context with "the people".

Par exemple, an imbalanced and some would argue unbalanced Congress morphed into a mere slaughterhouse for bills rejected simply because they were put up by a presidential administration of a different party minority — and not judged on their individual merit and content.

In this, the U.S. shares so much, not only with Australia, but the rest of the world.

Now Trump will hold the majority, he can virtually do what he likes. How will Trump handle such absolute power ?

Already the trashing of sentiment expressed in the First Amendment, and abusing of the American Constitution and law, has now become addictive behaviour in countries that describe themselves as democracies, including ours.

Like our recent Federal election, the U.S. presidential race was bereft as a contest of ideas or ideals.

Hillary Clinton and Donald Trump, and their strategists, were groin to groin in these last hours of state hopping, frenetic speech making, and tat for tit political catawauling. 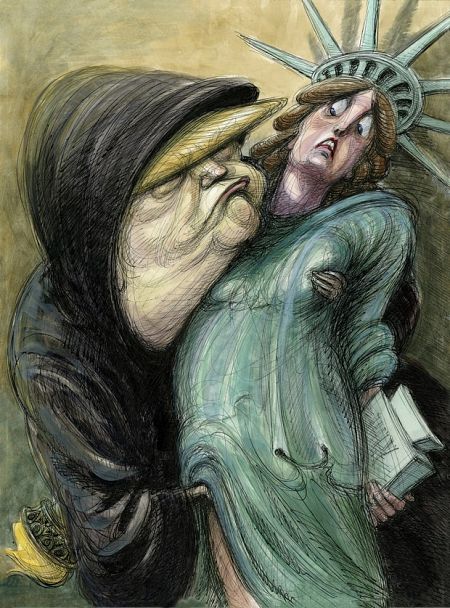 Trump's full frontal assault on America. This extraordinary illustration for Rolling Stone by Victor Juhasz says it all whilst making the onlooker squirm at the violation. G'day President Trump.

If ever we plebs needed proof of the abject hypocrisy of international diplomacy, we have only to read some of the obligatory messages of congratulations heaped upon Trump, including from some of our own leaders.

There is good reason why Australia is often referred to as America's 51st state.

Among the first to congratulate Trump was Russia's President Vladimir Putin, said to have had more than a passing interest in the election campaign.

It is extraordinary that Trump has almost come to the hearth of the Oval Office without tendering his tax returns. He is due to be sworn in on noon on January 20, 2017.

Given the dissing and dishing of dirt and the continuing intelligence gathering on both these major candidates by vested and invested interests, it is entirely possible that between now and then something may arise that could thwart Trump's inauguration. This is a faultline of his own making.

In fairness, it must be noted that Trump's victory speech was well written and delivered, and was gracious about Clinton's tenacity.

In his more recent speeches, one detects the lexicon and influence of his British tutor Nigel Farage, former head of the United Kingdom Independence Party, who is touting for a job with The Donald.

Trump has already been congratulated and invited to the White House on Thursday, U.S. time, by President Barack Obama. The body language will be interesting.

Of course, the bombshell that turned out to be a dud, dropped by former Republican Party member FBI Chief James Comey, over the continuing sage of Hillary Clinton's emails, is still live ammunition – as is Comey's future: 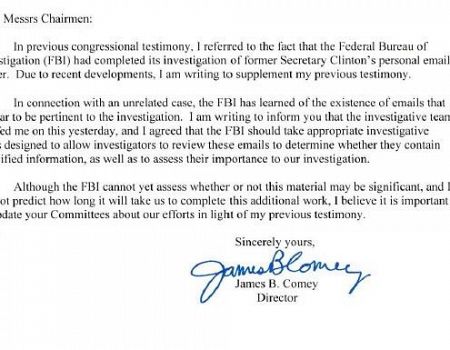 The bombshell certainly turned the tide in the Clinton versus Trump polls from Clinton's favour to Trump's.

‘This was a political stunt’: Internet blasts FBI Director Comey after he walks back Clinton email investigation https://t.co/wZm9DWQaL4 pic.twitter.com/baA1CenyDK

In the wee hours of this morning Oz time, a sombre-voiced Hillary Clinton made her concession speech. There had been disappointment when she didn't front earlier amidst rumours that she had not only collapsed with exhaustion but had not counted on losing.

Both her speech and that of the calming President Obama, who followed shortly afterwards, emphasised the critical need for a smooth transition for president-elect Trump, the GOP's rogue stampeding elephant; the subtext being fears for the internal stability and security of a nation riven by bitter divisiveness and the palpable hatreds endemic in the campaign.

Donald Trump is living proof of the American Dream.

The eagle has crash-landed.

Not a subscriber? Subscribe to IA for as little as $5 a month.

HE WON'T LAST - THERE IS NO UNITY Trump the False Messiah: Will he become the workers' anti-Christ? https://t.co/N45eCcZPfq @IndependentAus