There is a human rights catastrophe happening right on our doorstep in West Papua. The Abbott Government is not only ignoring it but is complicit in providing military support to Indonesia. Daniel Ellery reports.

A GENOCIDE of no small proportions has been taking place right under our noses for some time now. West Papuans have been the victims of a brutal military regime by the Indonesian government since the 1960s.

The mass slaughter and torture of West Papuans has had very little media coverage in Australia due to the successes of the Indonesian government in censoring and stopping information from leaving the Country.

This slow yet calculated murder of West Papuans has not yet claimed genocide status due to a legal definition in the 1948 United Nations Geneva Convention on the Prevention and Punishment of the Crime of Genocide.

For the West Papuan massacre to be claimed a genocide, the acts must have shown to have been part of ‘intentional efforts to wipe out all or part of the indigenous West Papuans as a distinct racial and ethnic group.’ Every single one of the definitions of genocide stated in the ‘Convention on the Prevention and Punishment of the Crime of Genocide’ has happened and is still happening to this day, viz:

Why is justice not being served to people committing these depraved acts against humanity and to Indonesia as a whole?

A report claims that indigenous West Papuan children are trafficked to hard-line Islamic schools in Jakarta, in which their names are changed and they are forced to observe Islamic practices. They are confined in harsh conditions, never to see their families again.

I wonder if it would be somewhat historically hypocritical of the Australian government to question Indonesia’s acts, since we have had quite a history ourselves. Maybe this is why Australia is failing to address these issues to this day.

A number of West Papuan leaders have all claimed this invasion by Indonesia as ‘slow-motion genocide.’ This controlled invasion on West Papuan freedom and independence by the Indonesian government started in the 1960s after Dutch colonization of the country came to an end.

A UN committee decided that West Papua be “returned” to Indonesian rule without any consultation by West Papuan people and in 1963, the Indonesian Army took control conducting a massive attack on West Papuans human rights.

Not till 1969 did a forum take place to consider the voices of the West Papuan people, called the ‘Act of Free Choice.’ Carmel Budiardjo, founder of the human rights organisation, Tapol, said about the act:

"It consisted only of just over 1000 so-called tribal chieftains who were selected by the Indonesians, with guns held to their heads, and forced to state their unanimous agreement that West Papua should become part of Indonesia. The UN scandalously accepted the result, and from then on West Papua was swept under the carpet."

All the more shocking is that Australia is a supporter of this Indonesian rule over West Papua and actively helps train military units that have been accused of human rights abuses. Reports say that up to 500,000 west Papuans have been slaughtered since Indonesia took reign.

Another report states that two helicopters supplied to Indonesia by Australia were part of operations that killed over 4,000 West Papuans in 1977-1978. It was also reported on the ABC’s The Drum.

http://t.co/kgBIRSNgWu At least NZ has some guts Australia is gutless and complicit in West Papua's genocide by the Indonesian military

On the 6 July, 1998, numerous barbaric crimes against humanity took place in Biak, West Papua, in which there are claims that over 100 civilians were raped, tortured, mutilated and murdered. A protest held by West Papuans demonstrating for independence were slaughtered by Indonesian Military and police — all of which have not been questioned or prosecuted for these atrocities.

Australia seems to have adopted an “out of sight, out of mind” attitude towards the people of West Papua by not pressuring the government of Indonesia to commence appropriate investigations and criminal proceedings, as exiled West Papua independence leader, Benny Wenda, stated. This in itself is quite disgusting as this has seemed to be conveniently swept under the rug.

The media have barely touched on Australia’s “dark-side” involvements in West Papua. I wonder if the “Fuzzy Wuzzy Angels”, dubbed so after the second world war, would have been so willing to help out Australian soldiers if they knew these blatant abuses of human rights were going to be ignored by the Australian Government and public? 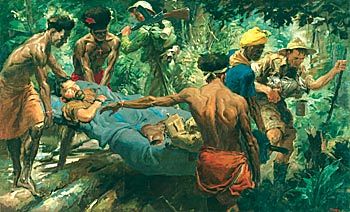 To make things worse, Prime Minister Abbott  stated in 2013 that West Papuan activists were not welcome in Australia, and that Australia would not tolerate West Papuans’ demonstrations against Indonesian control.

The government seems to have no problem publicly standing up for two members of the Bali Nine, who were executed in Indonesia, yet fails to initiate a probe into some 500,000 innocent West Papuan deaths.

Let’s hope we don’t see a repeat of the East Timorese situation in which close to a third of its population were killed before we managed to change our political stance on the matter. Raising and sharing awareness about these blatant human rights abuses is the only way change can come about.

For more information on the West Papuan Genocide, A report titled ‘INDONESIA: 'The Neglected Genocide' can be viewed here.

21 August 2015, 5:00pm There are ominous signs our civil liberties will increasingly come under threat as ...
Join the conversation
comments powered by Disqus
News updates