The wages of pollution is tax

Too much focus is being placed on economic issues, such as tax debates, at the expense of environmental problems, writes John Haly.

HOW IS IT that recent parliamentary bloodletting over tax breaks and electricity pricing continues to detract from steady planetary exsanguination? Are we now to accept that farm tours, milk levies and infrastructure spends are to be the ready tourniquets for our Australian economy?

The political focus on tax breaks to increase wage rates, while the world’s climate renders economics a mute subject, for a planet less habitable, is a distraction we probably can’t afford long-term. The political rhetoric around these subjects is diversionary and there is little truth expressed in the alleged relationships between these subjects.

Wage stagnation has a long, historical path dating back decades with the dismantling of industrial relations and neoliberal politics from both Labor and Liberal governments. Nowadays, even the ordinarily conservative mainstream media is conceding that wage growth is stagnating in Australia and the cost of living accelerating beyond even the means of the employed. The costs of living in Australia are not at all aided by the increasing costs inherent in power bills or food. 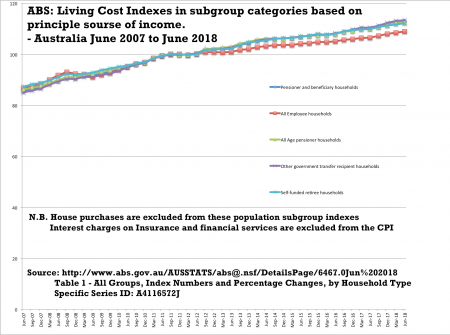 All classes of income suffer near identical CPI cost rises

CPI measures a broader range of costs faced by the public, but the news is grim for every income source. It is worse, though, than what is illustrated by CPI measures. In general, the CPI fails to account for substitution, and fails to factor in the price of housing and the cost of financing. Housing has increased at a disproportionate rate until very recently. Although the fall in housing prices is not expected to stop anytime soon, the cost of housing relative to wages will continue to make it unaffordable for increasing numbers of wage earners. 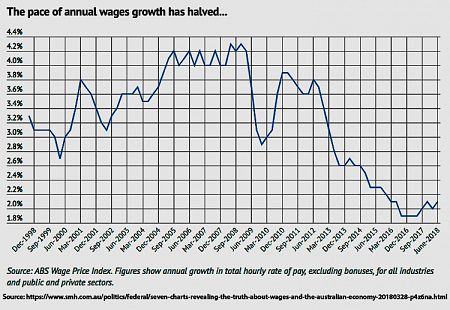 In a country where over 3 million live below the poverty line, there is an established class of the working poor, a depletion of income by the abolition of penalty rates, a diminishing middle class — “demand” may diminish along with the profits, which leads to the tax debate.

Instead of raising the minimum wage, reinvigorating penalty rates, or a cessation on undermining the manufacturing industry and public service, the only “significant” solution to low wages and the tide of unemployment offered by the Coalition is tax incentives that predominately benefit one class of Australians — the already very wealthy. The presumption that wealth and employment will trickle down from corporations to the public is an economic theory without any real-world evidence, while there is plenty that it does anything but trickle down. 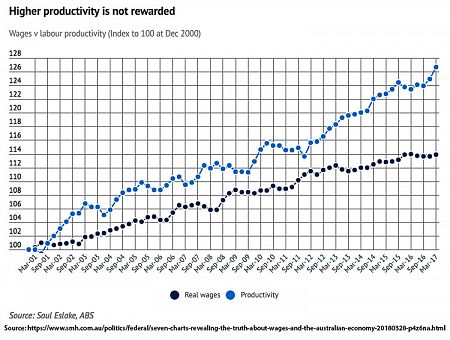 Providing tax breaks enables companies to retain more profit for the business, pay dividends, engage in share buybacks (as they have in America following Trump’s tax breaks) and store profits in offshore tax havens, such as Luxembourg, Bermuda, the British Caribbean, Panama or our former Prime Minister’s favourite, the Cayman Islands. Companies surely exist to benefit shareholders — or has everyone in the Liberal Party forsaken the demand requirements of business economics? Newly minted Prime Minister Morrison’s shift to small and medium businesses for his tax breaks reflects only the inability for him to pass the breaks for larger companies through the Senate. One presumes that smaller businesses, like Dutton’s childcare services, will not just benefit from direct subsidies from the Government, but also, now, generous tax cuts. Is one to presume that Mr Dutton will begin to pay his workers larger salaries?

No business employs anyone for which there is not a demand created for sales or a regulatory imposition they do so. Unless it is a not-for-profit NGO, it’s not a charity. If the existing demand for the company’s goods and/or services doesn’t initiate the need for employment, then no job vacancies are created. Demand is reduced when the public cannot afford your products and/or services. A depressed economy, where the people have low wages and little resources, creates diminished demand which is the reflections of the Australian retail market when business is down.

Fortunately, rising population (predominately via migration) and employment (even though at a diminishing rate and increasingly often part-time employment) keeps money flowing in the economy for retail sales to ebb and grow, although lately only at 0.4 per cent. Amazingly, without real-world evidence, trickle-down economics is still persuasive to many in the public. Unfortunately, “trickling” of any sort is in short supply in drought-ravaged Australia.

The trepidatious concerns of the conservative political pundit is that climate change mitigation risks harming the economy. Despite the apparent value inherent in jobs and demand in the renewable energy industry, Government literature attempts to downplay the severity.

Why Australia is heading for epic #failure on #carbonemissions because Prime Minister @ScottMorrisonMP has seemingly taken climate change mitigation off the policy table altogether.https://t.co/akvPi4WFQW

‘Annual emissions for the year to December 2017 are estimated to be 533.7Mt CO2-e. This represents a 1.5% increase in emissions when compared with the previous year.’

But in the preface, this Government document states:

‘Emissions per capita and the emissions intensity of the economy were at their lowest levels in 28 years in 2017.’

This comment is then followed by charts showing carbon dioxide per dollar of GDP falling. Why would anyone measure the proportion of a chemical compound in the air against an economic measure and have that be the narrative by which we should view pollution? Although one does admire the ingenuity in finding a way to convert a rise in CO2 into a charitable fall. But is GDP the measure against which to evaluate how our economy is contributing to greenhouse gas emissions?

GDP is not ever a good measure for some things, as there are far better measures of economic performance. But let's, for now, look at GDP and the assumption that all growth is good growth.

#LNP take note: "
Anika said as the ‘lucky country’, Australia was in a position to implement changes. She said as well as better government policies, moving away from the use of fossil fuels was vital." https://t.co/rZESckytwI

So measuring CO2 against GDP when GDP fails, on the one hand, to estimate the saving inherent in renewables that don’t pollute, factor in the costs of offshoring pollution from industries and add health costs caused by pollution is inherently deceptive. While, yes, the report admits on one hand that CO2 has still risen and then indulges in a gross deception to suggest there is anything positive about this.

The initial capital costs of solar, (including solar towers and molten salt energy storage that can generate power overnight), geothermal, wind turbines, hydroelectric, biomass, tidal waves and even the rain may have been expensive. It is evident the ongoing costs of renewables will be cheaper than coal in the future. The economic burden of power costs to lowly-compensated consumers can be mitigated by renewables and shifting from scheduled generation to scheduled load markets, but the Government persistently resists these changes for ideological reasons.

Ignoring anthropogenic climate change and the increasing CO2 emissions, not only in Australia but what we have outsourced to other countries, will only harm the future of Western economies. Low wages and high living costs hasten reduced demand and spending.  Whether by increasing power, housing, health and living costs, or the necessary mitigation, insurance or repair of harm caused by a changing climate, we will all eventually pay the piper.

The Coalition's internal climate war risks damaging the economy after Europe declared it would reject a $15 billion trade deal with Australia unless the Morrison government keeps its pledge to cut pollution under the Paris accord. #auspol #ClimateChange https://t.co/aP3icalRRq