Days after Peter Slipper defected Tony Abbott said "let's wait and see who Peter Slipper ends up ultimately damaging". What did he know? 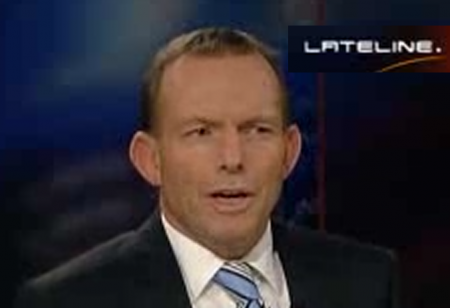 TONY JONES: So, you knew in advance that this move on Peter Slipper was going to happen, in fact supported it, because it looks tactically like a blunder when you've ended up losing a vote in the House.

TONY ABBOTT: Well, let's wait and see who Peter Slipper ends up ultimately damaging. There may well be, as you say, another two years for this Parliament to run and let's see how the speakership pans out for the Prime Minister. But, let me finish, Tony.

TONY JONES: What could damage the Prime Minister from any issues that Peter Slipper has?

TONY ABBOTT: Well, the point I'm trying to make, Tony, is that no-one, no-one in the Labor Party would be brazen enough to suggest that replacing Harry Jenkins with Peter Slipper has improved the standards of the speakership.

TONY JONES: Yeah, but where do you see the problems emerging with Peter Slipper? If you think he's going to be one of the worst problems facing the Government, where's it going to emerge?

TONY ABBOTT: Well, that's something only time will tell. But the point I made and I reiterate is that no-one - and it would be interesting if the Prime Minister was to submit herself to cross-examination on this issue - but no-one in the Labor Party would surely be brazen enough to say that the speakership was enhanced by the change from Harry Jenkins to Peter Slipper.

TONY JONES: But the most intriguing thing about what you've just said is that you knew in advance this move was going to be made on him and you must have therefore had a pretty fair idea that he was going to defect.

TONY ABBOTT: This is no revelation, Tony.

TONY JONES: But it doesn't look like a tactically brilliant move.

TONY ABBOTT: No, this is no revelation that Peter had problems in his electorate. He had problems with the LNP. It was in the newspapers every day. So I'm just in possession of the ordinary information that anyone that follows these matters would be.

TONY JONES: Yes, but a lot of your colleagues were a bit shocked to find you'd lost the vote in the House and wondered why something couldn't have been done about it. Did they actually know that you were part of the equation?

TONY ABBOTT: Look, I'm happy to answer your questions, Tony, but I think this is in a sense yesterday's issue. If there are more developments, I'll come on the program and we'll talk about them further.

But it was pretty obvious that at some point in time, had Peter remained in the Coalition and had he lost his pre-selection, as was likely, he would be an issue for me, a problem for me. Now, I think it's the Prime Minister who's got the Slipper matter to deal with.

TONY JONES: Except you're the one that's lost the vote. She's the one who's gained the vote.

This is a Prime Minister who will do whatever it takes, will stop at nothing, to shore up her numbers. We saw the political execution of Kevin Rudd. Now the Sussex Street death squads, if you like, have been out again for the Speaker of the Parliament and I think it was very undignified. And, sure, her numbers are up for the time being, I accept that, I accept that, Tony. Yes, tactical defeat, if you like, but at what long-term cost?