The ‘real Julia’ stood up for herself and for all women on Tuesday, and revealed the ‘real Tony’ for all to see, writes Deb Bennett. 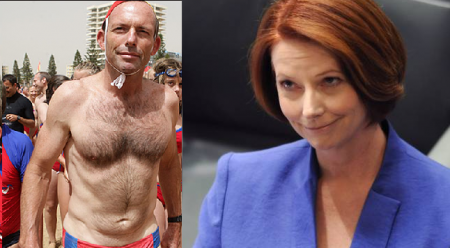 THE RECENT ATTACK by Prime Minister Julia Gillard against leader of the opposition Tony Abbott has been condemned in some sections of the media as hypocritical. At first glance – framed within the context of a defence for disgraced speaker of the house – this criticism would appear valid.

The text messages sent by Peter Slipper to his adviser, James Ashby, were indeed grotesque. They were misogynist and degrading and most people reading them would probably taste a little bit of vomit in their mouths. It will be left for the courts to decide if the comments constitute sexual harassment.

So well-trained attack-dog Abbott probably thought he could regain the moral high ground when he accused the prime minister of defending a misogynist and suggesting her government should “die of shame”.

It probably seemed a good idea at the time, but invoking the words of his now-disgraced mentor, radio ‘shock-jock’ Alan Jones, proved to be a game changer.

In the most mesmerising 15 minutes seen in Federal Parliament for many years, Gillard reduced the smug and sanctimonious Abbott to little more than a shame-faced schoolyard bullyboy, squirming in his seat as the headmistress admonished him.

Gillard agreed with the general assessment of Slipper’s texts ― they were indeed offensive. She then proceeded to list a series of examples of misogynist, sexist and generally rude comments and behaviour by the opposition leader since his time in parliament.

The list seemed endless: his association with baying crowds calling her a ‘bitch’ and a ‘witch’; the catcalls across the table in question time; his comments on women spending their time ironing, choosing abortion as an ‘easy option’ and not being physiologically fit for true leadership; his feeble attempt to distance himself from Jones’ comments and failure to discipline party members who attended the Jones’ diatribe all came under the spotlight.


Gillard’s challenge to Abbott was to assess his own behaviour and hold it up to the same accountability he demanded of Slipper. If Slipper should resign, then so should he.

The texts sent by Slipper were never meant for public consumption. Ashby alleges they were a clumsy, cringe-inducing, attempt by his boss to initiate a sexual relationship. Like the taped phone messages between Prince Charles and his then-mistress Camilla Parker Bowles more than 20 years ago, they serve as a reminder to us all that what is said in moments of intimacy (or intended intimacy) can be extremely confronting, if not horrifying, in the cold light of day.

Perhaps the biggest difference between the behaviour of Slipper and Abbott is that all of the indiscretions listed by Gillard were played out publically. Gillard did not have to delve into the private communications of the opposition leader to find the offensive comments ― all are a matter of public record, all were used by Abbott as what he must have presumed were legitimate attacks.

Gillard was not defending Slipper, she was defending the right of women to be taken seriously without having to battle the oppression of misogyny, both overt and covert, that has become an accepted part of the political discourse.

It would be naïve to suggest that both sides of politics come away from this with clean hands. But if anyone doubted a woman’s ability to match it with the overtly masculine boys’ club in parliament house, those concerns were swept aside yesterday.

The ‘real Julia’ stood up for herself and for all women on Tuesday, and revealed the ‘real Tony’ for all to see.

11 October 2012, 12:04pm The ‘real Julia’ stood up for herself and for all women on Tuesday, and reve ...
Join the conversation
comments powered by Disqus
News updates