The Morrison Government takes Australia from bad to worse

It will be more of the same neoliberal policies from the Coalition in 2019, writes John Passant.

All the old political players are still in power. Donald Trump is President of the United States. And in Australia, we have our own wannabe Trumps and populists of the Right — people like Pauline Hanson, and Liberals like Tony Abbott, Peter Dutton and even Scott Morrison.

The big story in Australia last year was the Liberal Party dumping Malcolm Turnbull as its leader and Scott Morrison becoming Prime Minister. Morrison is now the PM because he is not Dutton. That is hardly a recipe for success.

Ah yes, Turnbull should really have followed Dutton's political nous — how did that end again? This party is so entertaining. :) https://t.co/qDo8Wi0X2W

And so it has proved.

The Morrison Government staggers along, weighed down by its own incompetence and stupidity. The final utterances for 2018 from Peter "I’m a political genius get me outta here" Dutton captured that perfectly. His latest knife job on Turnbull will only inflame the divisions between the reactionaries and the conservatives (sometimes mistakenly called liberals) in the Liberal Party.

The junior partner, the National Party, continues its openly patriarchal and sexist ways, with some of its parliamentarians exposing themselves for the misogynists they are. But at least we know it is all about merit.

The idea that the Coalition operates on a merit system is laughable. #auspol #MeritMyArse pic.twitter.com/kqUX6DlR20

The dominance of men in the old boys’ club of the Coalition is not going to change soon. Even if it does, having female versions of Abbott and Joyce is not a step forward for working women.

Outside the bubble of Parliament, women are over-represented in the low paid sections of the workforce and in part-time work. The Morrison Government has done nothing to confront the structural imbalance that is the gender pay gap.

The Labor Party has promised to address this gap. But given the problem is an expression of the capitalist system in Australia it is difficult to see how this can happen without mass strike campaign led by women workers in female-dominated sectors.

Despite Australia being (according to the Department of Foreign Affairs and Trade) the wealthiest country in the world, poverty – which, to continue a theme, is gendered – remains high.

Wages growth has been very low in Australia since 2013.

As Greg Jericho and Gareth Hutchens said in The Guardian:

‘… the average Australian household has less disposable income in real terms than when the Liberal/National Coalition took power in 2013. And the major reason is persistent low wages growth.’

That persistent low wage growth helps explain the underlying disquiet with politics and the major political parties. But some people did alright. In 2017-18, profits grew five times faster than wages.  This continues a trend in place since the mid-1980s.

Saul Eslake in The Conversation has helpfully put the wages and profits share of national income since 1960 into one graph for us to see the long-term results: 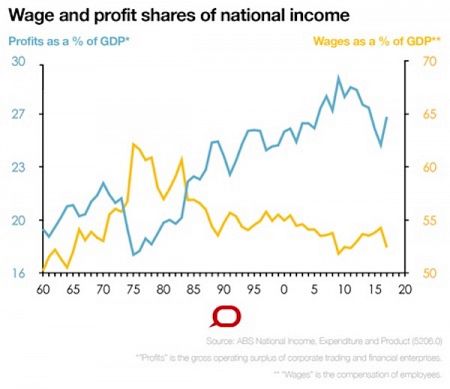 Without radical policies, that trend is likely to continue.

Another key set of figures which help explain the political, economic and social morass we find ourselves in, including low wages, are the strike statistics. In 2018, strikes and other industrial action remained at historic low levels.

Director of Australia Institute’s Centre for Future Work, Jim Stanford, found a close statistical relationship between the level of industrial action and the growth of wages over time: 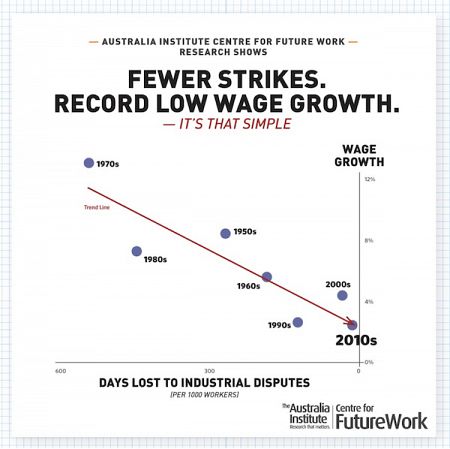 The lack of strike action not only leads to lower wages, but it also blunts our class consciousness and reduces our political awareness. This has all sorts of political consequences, including the long-term trend to fewer first votes for the Labor Party.

Other issues fester away. Funding for public hospitals, schools, universities and transport remains inadequate. The concentration camps on Manus Island and Nauru continue to brutalise refugees and asylum seekers.

Come 18 May, the odds are pretty good that there will be a Labor government and Bill Shorten will be prime minister. The ALP will face the same political and economic challenges as the present Government.

The problem for Labor is, to quote economic historian R H Tawney, ‘you can peel an onion layer by layer, but you can't skin a live tiger claw by claw.’  Capitalism is a tiger, not an onion and those who wish to manage it are in for a wild ride.

This means that systemic issues that flow from the very nature of the capitalist system, such as sexism, the gender pay gap, poverty, low wage growth and inadequate public services require systemic solutions. To be successful, such solutions must challenge the status quo.

An incoming Labor government will be a different jockey riding the same faltering horse. As such, the democratic impasse between the wishes of the vast majority and those of the one per cent who dominate society, including parliament, will continue. This may even worsen if people become disillusioned with Labor's inability to deliver what most people want.

The rise of reaction to power might be the next stage in the development of Australian politics if that is the case. It is happening elsewhere. Trump in the U.S. is but one example — rising on the back of the soft centrism with a Left face that was Barack Obama. In Brazil, Jair Bolsonaro, a fascist, has become President after many years of leftist rule. In Austria, the fascists are in a coalition government.

In Melbourne on Saturday (5 January), hundreds of neo-Nazis protested against black people at St Kilda Beach. Disgracefully, "Final Solution" Senator Fraser Anning was there to support them.

.@drkerrynphelps on the St Kilda Rally: It is a growing concern that we are seeing neo-Nazi symbolism in a major capital city in Australia.

We need to call this rally for what it was – it was a neo-Nazi demonstration.

The global failure of many of the traditional parties of the Left to radicalise in an anti-capitalist direction has laid the groundwork for the rise of reaction and fascism. In this time of growing inequality and poverty and the long slow decline of capitalism in Europe and the U.S., this may lead to a recession in Australia, signalled by falling house prices and wages.

This could change if a mass movement for progressive social change and economic equality, like the yellow vests in France, broke out in Australia and forced whoever was in power to make major economic concessions.

Overshadowing everything is climate change — the existential threat to humanity and, by extension, to capitalism. The climate change deniers in the Morrison Government are running the show. Australia will not even meet its totally inadequate 2030 Paris Agreement emissions reductions.

However, the problem goes further than that. Paris is not a cure. It is not even a panacea. Paris is a placebo. Only a socialist revolution – a mass democratic movement of the workers who make the wealth of capitalist society – can remove or, given the lateness of the hour, ameliorate the threat that is climate change.

As Liberal Minister for Industrial Relations Kelly O’Dwyer told colleagues after the election wipeout in Victoria, the Liberal Party is seen as one of

It also rules openly for the one per cent.

All the Coalition has to offer is fear and hate, and, given soaring revenues built on bracket creep, electoral bribes.  Such offerings do not feed the family or tackle climate change, or end the abuse of refugees and asylum seekers on Manus and Nauru.

If the Left were to offer a radical economic and social program it could offer hope to millions. Here’s to a fighting, revolutionary 2019!