Tom Cummings has heard Joe Richards’ belated excuse about the Mal Brough #menugate disgrace — and says it has the unmistakable odour of bovine excrement.

The media was buzzing all day yesterday about that menu.

The mock menu allegedly created for a Mal Brough fundraiser back in March.

The menu that refers to a number of Labor MPs ― but specifically to Prime Minister Julia Gillard in a highly offensive and sexist way.

And by "media", I mean all the media.

Newspapers, TV, social media, radio ― it's been everywhere,. Meanwhile, other stories  ‒ such as the 260 Target workers made redundant in Geelong ‒ seem to have slipped through the cracks.

Last night, there was a twist in the tale.

Apparently, Joe Richards ‒ the owner of the restaurant at which the fundraiser was held ‒ has claimed responsibility for the menu, and says it was an "in-joke" that was not used at the fundraiser at all.

As reported on The Age website, Richards wrote a letter to Brough explaining the situation after seeing it reported on the evening news.

At midday, this story, written by Latika Bourke, was released on the ABC website, with the headline screaming:

The third paragraph of the article states:

‘Mr Brough says the menu was drawn up by a non-party member who thought it would be "humorous" and "didn't mean any harm by it," but is now "deeply apologetic".’

So, at midday, Brough was aware that the menu had been drawn up by a non-party member, who was now deeply apologetic.

But wait … how could Brough have known this, if Richards didn't contact him until later in the day?

Remember, Richards didn't write his letter to Brough until after seeing the story on the evening news.

And in his letter, which was subsequently distributed by the LNP, he stated the following:

As you know no one at the dinner was privy to such a menu, and it is so unfortunate that an in-house joke between myself and my son has caused you great problems and embarrassment.

How, then, could Brough have known that Richards ‒ a non-party member ‒ was responsible for the menu when the ABC article was published at midday?

It doesn't add up.

Brough made statements, reported at midday, containing details that he couldn't have known until later in the day ― if he and Richards are to be believed.

Unless it is just a flimsy fabrication to protect a highly protected candidate.

I'll let you be the judge of that.

(This story was originally published on Tom Cummings' blog and has been republished with permission.) 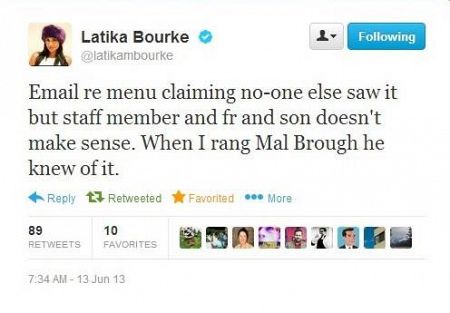