The Liberals, Kevin Andrews and the anti-gay, pro-life activists

Now the Australian Tea Party have turned back the clock by reversing Australia's stand on climate change, so no-one should be surprised by their unbridled support for a wacky religious anti-abortion anti-gay event in Melbourne next months, writes senior correspondent Barry Everingham.

NOW THAT THE LIBERALS, with the disgraceful help of Clive Palmer, have lied their way into making Australia one of the biggest comedy acts on the world’s stage through the repeal of the carbon price, many citizens will be wondering what the conservatives have up their sleeves to scare us to death next time.

The extreme lunar right of what was once a great political party have come up with a beauty — one could say, a real doozey.

It will not come as a surprise that the ring leaders of what we are to reveal are none other than the master of disaster himself, Kevin Andrews (of Dr Haneef fame); the Government  Senate Leader,  Industrial Relations Minister Senator Erich Abetz; and the biggest and most ideologically dangerous non-entity in Victoria’s Upper House, Bernie Finn, whose mind is so damaged he has called for rape victims who become pregnant to be denied abortions.

That scary trio of Flat Earth Society members month have become affiliated with a discredited conglomeration of social misfits who work under the banner of the World Congress of Families. The WCF managing director is a Dr Larry Jacobs, whose only known claim to fame as far is his statement  that Russia is the Christian saviour of the world because of the country’s attitude to homosexuality.

The Congress is holding a "regional event" in Melbourne on 30 August. The event had originally been scheduled to be held in Moscow, but U.S. and European sanctions against Russia over Ukraine had forced the organisers to scramble for a new venue at the last minute.

Kevin Andrews is fully on board, opening and closing the event. Kevin, of course, is the genius of a Social Services Minister who won't allow people under 30 to get benefits for six months after losing their job, however is giving newlywed couples a $200 voucher for marriage counselling. It is genius, because I for a newly married couple, being unemployed and without any income for six months would surely cause some relationship strain. 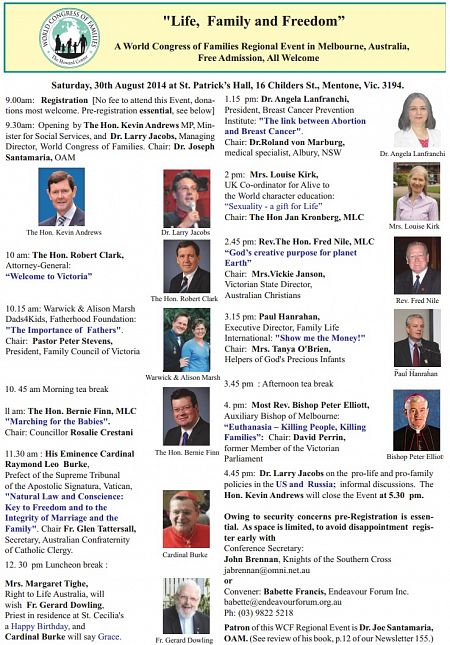 Another of the keynote speakers is listed as Angela Lanfranchi who has managed to outrage many of the world’s top medical researchers and practitioners by her insane claim that women who have an abortion leave themselves open to contracting breast cancer. Uncle Erich is hosting a World Congress of Families event at Parliament House with Lanfranchi and Larry Jacobs on 28 August.

Now Abetz and  Andrews are two of Abbott’s most loyal supporters and it's no secret they lead the now dominant Liberal Party Catholic right who engineered Abbott’s betrayal of Malcolm Turnbull and who, with the help of Peter Slipper’s vote, delivered to the Australian people their most unpopular prime minister ever.

Bernie Finn, of course, is ridiculed  by most Liberals in Victoria and it comes as no surprise that his key supporter, the disgraced and disgraceful pro-lifer Jeff Shaw, is currently suspended from the Victorian  Legislative Assembly.

Whose name has appeared on the list of supporters who will be attending the Congress?

None other than Senator Cory Bernardi. The man who believes legalising  gay marriage could lead to bestiality — his maniacal rationale being that some gay men would not be satisfied in marrying their same sex partner, they might then want to marry their dog, whom they love! 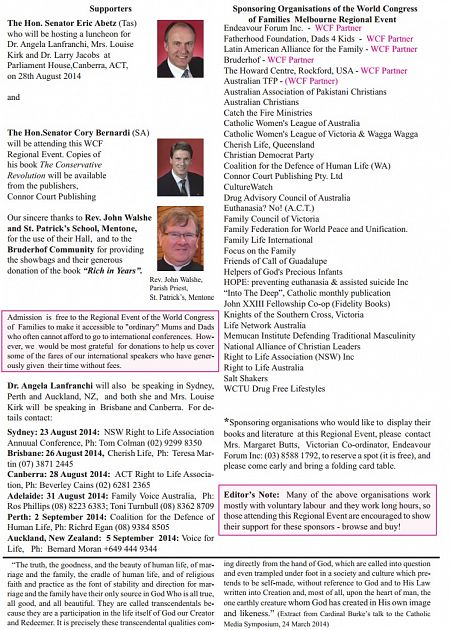 Of course, the good Senator is one of Professor David Flint’s pin-up boys and a leading (if that is the right word) monarchist to boot.

Also speaking at the Congress is Victorian Attorney-General Robert Clark, though he claims to only be there to welcome a major event to Victoria. Right!

Most people are judged by the company they keep and this crew do their Party no good at all. But by their association with the Assembly and those who support it just might come to haunt them by the time of the next election.

What will also haunt them is having a prime minister who made endless promises before becoming elected and then denied even making them afterwards.

Tony Abbott's party is a rabble of misfits and this Government looks almost certain to be a one-term wonder — if it manages to limp on that long.

Moreover, Abbott personally is as genuine as a $7 bill, and if you don't believe me, watch him squirm and struggle on the issue of his honesty with Sarah Ferguson on 7.30 tonight (17/7/14):

The only victories which leave no regret r those which are gained over ignorance Napoleon @independentaus @forthleft pic.twitter.com/ppjBiVt2o8