Why did the mayor of Blacktown Council grievously insult veterans on ANZAC Day? Peter Wicks reports on a shameful piece of party politicking on our important national day. 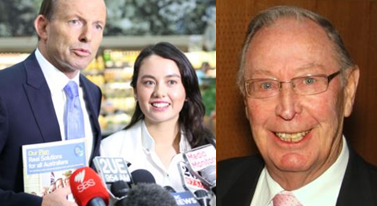 IT IS A SHAME to have to write an article such as this regarding ANZAC Day, however it would not be right not to let the public know about the outrage I'm about to go into.

Rooty Hill RSL has again become the centre for political controversy, even on ANZAC Day.

Once again, Rooty Hill RSL became the focus point in the battle for the votes of Sydney's Western Suburbs.

The West has seen yet another example of a political party ruled by self-interest and having little respect for their community and its own constituents.

If a political party has no respect for our country's war veterans, then I wonder just what they would have any respect for at all.

ANZAC Day is a sacred day in Australia, it is the most important day on the calendar without question. It is a day to put our differences aside and respect those who gave so much.

Above all, ANZAC Day is not a day to seek out political gain, particularly at the expense of a digger. ANZAC Day should not be seen as a day for campaigning, it is a day for political party's to reflect.

Unfortunately, in Sydney's West, this was not the case.

Charlie Lowles is a man well known in his community; he is well-respected by all and is known to always put the community’s needs before his own.

Charlie has even been awarded an Order Of Australia for his more than 40 years of community work and proudly bears the OAM initials after his name.

Charlie has been a councillor on Blacktown council for 24 years, including serving as Mayor.

One of Charlie's greatest honours has always been representing council at the ANZAC ceremony held by the Rooty Hill RSL, something he has done for nearly a quarter of a century. Charlie is not only proud to do this as a citizen and councillor, but particularly as a war veteran.

Charlie spent seven years of his life in military service, and spent a year-and-a-half of that in armed combat in Korea. And after spending 18 months in a war zone it goes without saying that Charlie would have been left with some vivid memories and to this day will carry the burden of mental scars that won’t heal, scars from wounds he received on the battlefield on behalf of his country — our country, Australia.

These are seven years of his life that Charlie is extremely proud of and ANZAC Day is the day that the Australia get’s to give a little back by offering Charlie the recognition he truly deserves.

Another Councillor on Blacktown council is Isabelle White.

Student teacher Isabelle has learned much in her 22 years, she knows she will still need to show photo ID when going to a club like Rooty Hill RSL. She has also learned quite a lot about armed conflict, she has read about it in textbooks, seen it in movies, and maybe even experienced it first-hand on a Playstation or an X Box.

Isabelle is also a Councillor with weeks of experience behind her. Isabelle is however also the Liberal candidate for the Federal seat of Chifley.

With Blacktown council now under Liberal control, which of these two councillors do you think the new Liberal mayor sent to the dawn service put on by the Rooty Hill RSL?

I'll give you a clue, it's the councillor whose only medals are probably from school athletics carnivals.

That's right, under Liberal control the city's mayor, Len Robinson, sent the Liberal candidate for Chifley, Isabelle White, off to do the honours normally done by Charlie.

Charlie Lowles was deeply saddened by this act of sabotage on such an important day.

After all, not only has Charlie represented council at this service for longer than Isabelle White has been alive, he is also the only current councillor who has served Australia in the military.

By his actions, Blacktown's mayor Len Robinson has effectively spat in the face of every digger he sent Isabelle along to represent. His actions show a callous disregard for any emotion felt by our veterans on this most important of days. Len Robinson’s insensitive and cruel actions on this day are at best unpatriotic and at worst an act of pure bastardry.

If the Liberal Party has any sort of integrity, decency, or respect for our veterans, they will expel Len Robinson from the party for this act, which is nothing less than an insult to our troops.

(Disclosure: Peter Wicks is a former ALP state candidate and is a current Labor Party member.)