If the Liberal Party had any guts, the latest Neilsen poll would put an end to Tony Abbott as leader of the Opposition, says Barry Everingham. 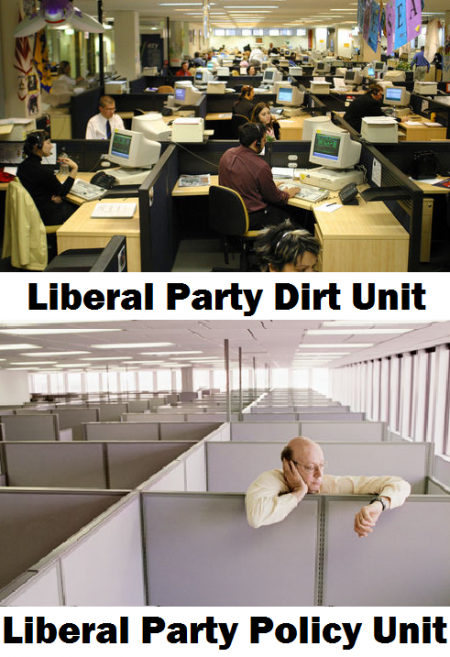 The results of the latest Nielsen Poll should send a clear message to Tony Abbott and the Liberals: that Australians will never wear an out of control thug as Opposition Leader — and certainly not as Prime Minister.

Abbott  has successfully – thank God – shot himself in the foot and if those crawling troglodytes behind him had any guts at all, they would be counting numbers right now in preparation for a change.

The public should have already realised what a dead loss Abbott is by looking at the make-up of his front bench.

For starters, who is his right political mind would have promoted the bigoted homophobic Cory Bernardi to a front bench position?

Or who would tolerate the appalling Sophie Mirabella as a spokesperson (of course, Abbott might prefer to call her a “spokesthing”)?

The ancient Bronwyn Bishop is so past her use-by-date, she is now a waste of time and taxpayer's money.

The  cold, calculating, craven Clown Counsel, George Brandis, spews endless filth in the Coward's Castle — that he hasn’t the guts to repeat in public.

Christopher Pyne minces to the Despatch Box to hiss away like a demented matron, making a fool of himself every time he opens his mouth.

Julie Bishop, whose cold eyes literally glisten as she denigrates Julia Gillard about the AWU — and never comes up with a scintilla of credible evidence to support her allegations.

I mean, what kind of Opposition leader would see merit in any of these dead losses — the detritus of the once great Liberal Party.

In Bob Menzies' day, not one of them would have got a look in.

The great man would never, in a fit, have worn the likes of Barnaby Joyce — who, at the end of the day, should get a job in a circus.

God knows, Menzies was hamstrung by the agrarian socialists — who then paraded under the Country Party banner. But at least he was up against a tough man in John McEwen – not a measly weakling like Warren Truss, who won’t even stand up for his own  people.

Where are the political  giants of yesteryear — decent fearless men, who had principles and abided by them?

The adage that countries deserve the Government it gets wouldn’t hold up in the event of an Abbott election win.

The man is a disgrace to his party, to the Parliament and the country.

If ever It’s Time was the clarion call, it is now; right now.