The illegality of structural unemployment

The Federal Government has an obligation to provide for full employment for Australians, so why is the true rate of unemployment over 12 per cent? Ludwig Heinrich reports.

IT IS MYSTERIOUSLY DIFFICULT to work out how many people are unemployed in Australia and, as far as I am aware, this has always been the case.

At least since the mid 1970s, organisations concerned for the welfare and rights of jobless people, such as the Work Resources Centre (ANU), Jobless Action, The Foundry and others attempted to calculate the “real” unemployment rate, as they were aware the “official” rates were so much lower than what experience on the street showed.

The general conclusion was that the official rate was usually about half of the real rate.

Moving into the 1990s, governments gamed the system further with clever definitions of what constituted being unemployed and so it came to pass that if an individual engaged in one hour's work each week they were not unemployed.

In February 2014, over 1.5 million were unemployed and over 2.6 million people were underemployed. These figures differ from the “official figures”  provided by the ABS and are derived from Roy Morgan Research so a note on methodology is warranted:

'The Roy Morgan Unemployment estimate is obtained by surveying an Australia-wide cross section by face-to-face interviews. A person is classified as unemployed if they are looking for work, no matter when. The results are not seasonally adjusted…'

On the same web page, Morgan explains why the ABS figures differ:

The Australian Bureau of Statistics Unemployment estimates are obtained by mostly telephone interviews. Households selected for the ABS Survey are interviewed each month for eight months, with one-eighth of the sample being replaced each month. The first interview is conducted face-to-face. Subsequent interviews are then conducted by telephone.

The ABS estimates give an unemployment rate of 6%, while Morgan says its 12.3%.

To be fair, the ABS does note:

Even so, the so called 'extended labour force underutilisation rate' is only about the same size as the Roy Morgan estimate of unemployment.

So who to believe?

I tend to believe the Roy Morgan figures, as they seem to reflect what I am observing in communities across Australia and because some of the ABS definitions are somewhat dubious, but really the question should be: why do we need to rely on estimates when the Department of Human Services could supply the actual figures?

I don’t imagine that the figures will be forthcoming, however. It is unlikely that the government wants anyone to know that over 4 million people are being pushed into poverty.

Not that this is completely hidden.

For example, Oxfam makes the point that

'The bottom half of the world’s population owns the same as the richest 85 people in the world.' 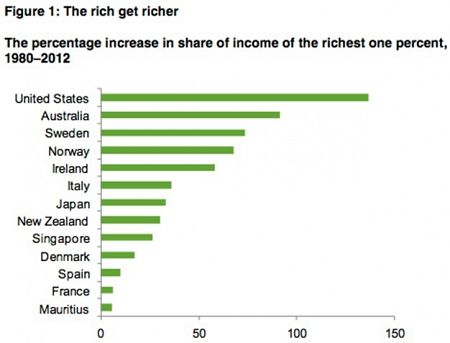 'The outstanding faults of the economic society in which we live are its failure to provide full employment and its arbitrary and inequitable distribution of wealth and incomes.' [J.M.Keynes. The General Theory of Employment, Interest and Money, MacMillan, 1936, p372.]

That was true then and it is true now.

In The Wealth of Nations, the founder of  modern economics[1], Adam Smith warned of 'great inequality' where 'civil government' is 'instituted for the defence of the rich against the poor'.[2]

In the introduction to that famous book, Smith draws a distinction between subsistence and 'market' economies when he makes the claim that:

'Among the savage nations of hunters and fishers, every individual who is able to work is more or less employed in useful labour, and endeavours to provide, as well as he can, the necessaries and conveniencies of life, for himself, and such of his family or tribe as are either too old, or too young, or too infirm, to go a-hunting and fishing.'

After telling us that this leads to poverty, he claims that a 'civilised' nation leads to

'... a greater share of the necessities and conveniences of life than it is possible for any savage to acquire.'

This may very well be true – although Bill Gammage’s The Biggest Estate on Earth: How Aborigines made Australia (2011) casts some doubts on Smith’s definitions – but the real problem is that the institution of the state has assumed control over all the lands and resources such that one may no longer live a subsistence life, even if one had the skills to do so, and so it is incumbent on the state to ensure that everyone has sufficient to provide for their needs. That is, the state must either guarantee a liveable income or a job that provides one.

This is not a new idea, Thomas Paine advocated a citizen's dividend to all U.S. citizens as compensation for

'... loss of his or her natural inheritance, by the introduction of the system of landed property.' [Agrarian Justice, 1795-6]

More significantly, it should be noted that this idea is embodied in the Universal Declaration of Human Rights, Article 23.1 of which states:

'Everyone has the right to work, to free choice of employment, to just and favourable conditions of work and to protection against unemployment.'

Member states – signatories to these international accords, such as the Commonwealth of Australia – have a legal obligation to respect, protect and fulfil economic, social and cultural rights such as the right to education, right to housing, right to adequate standard of living, right to health and the right to science and culture, and they are obliged to take towards their fulfilment. Regardless of the economic situation in the country or resource scarcity, all signatories are required to ensure respect for minimum subsistence rights for all.

Given the cost of living – and in particular the cost of housing – do “Newstart” payments fulfil those requirements?

And there are more problems, as Greg Jericho points out:

'The RBA noted as well that while employment was key for shifting people out of disadvantage, if that employment was only part-time or casual, that was less likely to achieve this goal.'

Which brings us back to the labour force underutilisation rate and that:

'Unfortunately the structural changes occurring in the economy are working against this as, since 2008, there has been little growth in employment in occupations where economically disadvantaged persons are typically employed - such as labourers, technicians and trades workers, and clerical and administrative roles.’

Jericho goes on to say that

'It's clear that long-term unemployment is a key driver of disadvantage because the longer you are unemployed the more likely you will either stay unemployed, or lose faith and leave the labour force.'

In 1945, the Chifley Government produced the White Paper Full Employment in Australia. Whatever the value of that document, the rise of the International Monetary Fund (IMF), the World Bank and the General Agreement on Tariffs and Trade (GATT) resulted in the increasing affluence of the few at the expense of everyone else. As the figure above from Oxfam shows, this inequality continues and is accelerating.

As signatories to the Universal Declaration of Human Rights and to the International Covenant on Economic, Social and Cultural Rights, the government is obliged to act.

We the people need to remind them of Article 1 of that White Paper [IA emphasis]:

'Full employment is a fundamental aim of the Commonwealth Government. The Government believes that the people of Australia will demand and are entitled to expect full employment…'

[2]  This coming from the man who is so often celebrated by advocates of free market policies as the founder of free market economics! He also claimed that it was the role of the government to provide goods "of such a nature that the profit could never repay the expense to any individual" such as roads, bridges, canals, and harbours. He also supported public education.

The illegality of structural unemployment

30 April 2014, 8:30pm The Federal Government has an obligation to provide for full employment for Aust ...

3 June 2013, 2:00pm With the Government under fire over asbestos safety concerns concerning the NBN, it ...
Join the conversation
comments powered by Disqus
News updates