The Government's misguided crackdown on 457 visas

The Government's decision to target the foreign workers on 457 visas as part of its election strategy ignores the knock-on effects and long-term impacts, says Grant Wyeth. 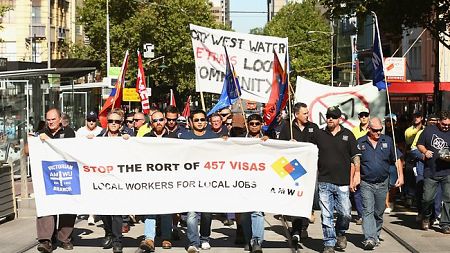 NINETEENTH CENTURY French political philosopher Frederic Bastiat claimed that bad economists looked only at what seemed to be the obvious consequences of an action and ignored the knock-on effects and long-term impacts. It is fair to say that the Government's decision to target foreign workers on the 457 visa as part of its election strategy is a clear example of Bastiat's assessment.

Hardheads in political war-rooms think only of votes, and so those without a vote can be routinely abused, regardless of the positive contribution they make to the country.

With the Coalition having a firm hold on the vilification of asylum seekers, Labor have had to go looking for a different group of foreigners to disparage.

Abandoning the modern economic maturity they gained during the Hawke/Keating years, they appear to have identified skilled immigrants on the 457 visa as this group. Bereft of any populist narrative of their own, the Government now has a “queue” to match that of the Opposition.

In a recent speech at the Australia India Institute, former Labor MP and prominent journalist, Maxine McKew stated that this was a “return to the worst of Labor's past” — the insular, protectionist worldview that saw both trade and immigration as major threats, both culturally and economically.

Unfortunately for the Government, as well as these ideas being incredibly myopic, this traditional constituency no longer exists in any electorally significant numbers. Labor seem now to have resorted to nostalgia for their former rusted-on base as some kind of comfort.

What this perspective misses is that all immigration is creative and positive, and particularly that of skilled immigration. It increases demand for local goods and services, brings intimate and essential knowledge of other regions of the world, as well as the diversity of talents and ideas that cross-pollinate and fuel innovation.

This is something that the Howard Government knew very well. Howard threw a slab of meat to the anti-immigration wolves in the form of demonising asylum seekers, and as they salivated and barked with excitement, he was able sneak in a major increase in numbers of skilled immigrants behind their backs.

It was a despicable ploy for our moral standing – not to mention the lives of those fleeing persecution – but a cunning piece of politics..

In the Parliament today we have no-one of that kind of political mind. This government seem to determined to knee-cap the country (and themselves) in a desperate ploy for cheap votes.

My current employer came to Australia on a Working Holiday visa. Initially, she was doing a typical backpacker's job of selling tickets to comedy shows door-to-door. She entered one office with this intention and instead secured with a job to be sponsored on a 457 visa. There was no queue of Australians to jump; a job was created for her because of the impression she made and her unique skills. Several years on, she now owns her own successful company that employs 6 people.

No government checklist could have provided criteria for her to meet for the 457 visa. She just managed to knock on right door where her potential was spotted.

Companies, and the country in general, need this “you know it when you see it” flexibility. Yet Canberra finds it irresistible to try and micro-manage these processes. However, bureaucrats and politicians can never have the requisite information to identify potential that other organisations can. Stricter regulations on how companies use the 457 visa will inhibit the ability of Australia to gain significant new contributors such as her.

With Europe's current woes, and especially with France trying to tax away its talent, the present Government seem to be unaware as to how advantageous this could be for Australia. Give us your young and educated, should be our slogan, yet instead Labor are pulling up the welcome mat.

With high inter-country mobility increasingly being the norm for professionals throughout the world – especially in the modern service industries – to cut Australia off from the global talent pool is counter-productive to the infrastructure of opportunity that this immigration can create here.

Political parties have become so addicted to petty nationalism as a tool to manipulate the public, that they are in denial – or oblivious – to these 21st Century realities. Or choose to just throw them in the too hard basket, regardless of the consequences.

The latter would actually demonstrate the contempt that politicians have for the electorate. There is a strong sense within the political classes that there is no possible way that the general public could ever understand issues such as immigration, and so there is no point explaining them. It’s much easier to create superficial policies like Labor have with their “crackdown” on the 457 visa.

However, it is this low-esteem that politicians and their communications staff have for the public that fuels our current frustration and disillusionment with them — and tellingly, the tablecloth Senate ballot we will see come September. A ballot with the input and diversity we should be encouraging for the country across all sectors.