The demeaning of Julia Gillard

The continued popular demeaning of Julia Gillard shows up an Australian society in which there are still few roles truly available for women, writes Anna Sande. 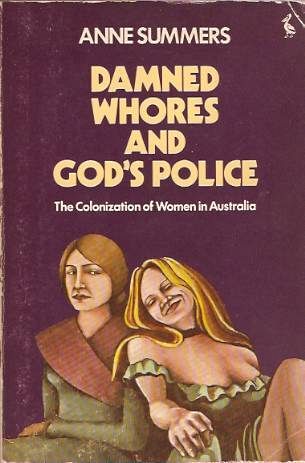 Damned Whores and God's Police, the title of Anne Summers' 1975 work, nails it.

Her study of 'the Colonization of Women in Australia' suggests that Australian history up to the mid-1970s ‒ and now evidently beyond that to the present ‒ continues, in the minds of many, to offer few openings for women.

This seems absurd in 2013 but the media suggests it’s true.

In John Armstrong's article in this weekend's The Conversation, 'Can we accept imperfection and still strive for a better society?', he philosophically observes that churches, 'which were once powerful and noble in intent look deranged and broken', and that other social pillars are 'in disrepair' or 'fragmenting'. He observes that since 'reverie is punctured' we need a 'seductive' good.

It is clear that one of Summers' interpretations of the place of women is kaput ― the Church (and its multitudinous tentacles ― many in schools) is in near fatal disrepute. Thus, if Summer's thesis is correct, in terms of roles for women, this leaves only 'damned whores'.

Also on the weekend, on ABC Radio National's Saturday Extra, Geraldine Doogue called on some significant minds to tease out the place of at least one woman in Australian culture. Neither Wendy McCarthy nor Don Watson nor Michael Gawenda, could come to a comfortable concurrence about why Australia's Prime Minister is being so demeaned in Australian public life.

I wish to propose an angle not covered.

Consider this ― what happens when a person is embarrassed, confounded, frustrated (as many of us are by the current state of affairs) and let's suppose that person is male?

There is a reaction and predictably it is frequently spontaneous, awkward and often regrettable ― grounds for self-questioning and apology in an accountable and reasonable world. Failing a civil response, it seems a toxic gender-oriented mix of shame and pride step in, and an ugly defensiveness takes over.

There is an increasing intrinsically personal dimension to Australian politics. Unfortunately it seems we now need more and more often to look to the foibles of the frail and fallible ‒ the human ‒ and ask the question ― where will we draw the line

What is acceptable? Who will voice the decision ‒ and stand by it ‒ despite personal, political or economic 'loss'.

There is an infinite multiplication of ‘microphones', as Don Watson put it, that give 'the human' an often undeserved and unprepared for platform ― a false gravity; a power beyond means and ability. The conversation between Doogue and her visitors touched on a return to political correctness as a preference to this digitally-enabled plethora of venting, veiled as opinion. John Armstrong would have it that 'the obstacle is human nature' which 'craves … distraction'.

How do women figure in this profound shift in the ability 'to air'?

Observe: next time there is a business/political mistake made and the media is at the doorstop ― notice who 'fronts'. Nine times out of ten, it will be a woman ― an attractive human shield; a 'damned whore' wheeled out for distraction. Australia has come to this.

Julia Gillard was offered Kevin Rudd's job by men in dire straits. Gillard is no scapegoat but a fall guy, tricked and deceived and subject to collective Labor schadenfreude.

Doogue queried why Gillard did not walk away from the radio 6PR 'interview' with, the now sacked, Howard Sattler, who had questioned on air the sexuality of Gillard's partner:

Doogue's visitors proffered that it was her attempt to be decent ― to see it out, even to the point of allowing herself to be photographed with Sattler afterwards, although she apparently looked “shocked”. Would a man have been so 'fair'?

Where to for a positive solution to this extreme ugliness of manner and vacuum of noble values?

Martin Flanagan, (The Age, 1.6.13), writing of the cultural implications of the Woolwich horror and the need for relativism regarding local sports racism, urges:


'… if we lose sight of … our relative gains, there is, literally, no hope. Because the battle never ends.'

I would add let's respect and acknowledge mentors and educators of good will.

This is all very well while good is still found.

When GrainCorp is sold off, and Simplot stops processing our own fruit and veg here, and the U.S. has more than just a few thousand of its military stationed in our north, and our contiguous oceans are awash with dead and dying bodies, these factors must surely make the Australian male, in particular, (gender stereotypes apply both ways), cringe, or erupt and continue to resort to pillorying women ― the only soft spot upon which to vent his anger and impotence. Each gender sees the world differently. The homogenous national 'we' needs to acknowledge that.

Australians all would do well to stop and reflect. Talk about what you think is fair with anyone who will listen and listen in turn. Ask yourself, and each other: 'Where is that line?’ Together we need to configure better parameters for all Australian women ‒ and men ‒ through sound example and excellent education, with zero tolerance for anything less.

3 July 2013, 8:00am The recent David Gonski chaired Review of Funding for Schooling was the first major ...
Join the conversation
comments powered by Disqus
News updates