The class war is over — now the medals to the victors

WATCHING AUSTRALIAN POLITICS since the election of the Abbott Government has been like watching one of those comedy routines – Benny Hill perhaps, or The Goodies – where the film is run backwards and the comedians are seen jerkily and rapidly moving back into the landscape, finally disappearing backwards over a hill.

Tony Abbott and his clown troupe running the clock backwards has astonished not just Australian citizens who had thought they were living in the 21st century, but civilised people everywhere who had thought we were too.

The reversal and proposed reversal of advances on climate change research and action, including even clean energy development; the determination to get rid of World Heritage forests; the disgraceful punishment of refugees; the determination to bring in a nineteenth century school curriculum and schools; the attacks on universal health care, public broadcaster, unions; the dismantling of a modern broadband network; removal of financial regulations; removal of laws about racist hate speech.

Every day has seen a determination to undo every advance by any Labor Government since 1901 and plunge us back into the nineteenth century as the rest of the world moves further into the twenty-first.

But this week saw something both unexpected and somehow symbolic of all the rest. The Prime Minister of Australia announced he was bringing back British honours, knights and dames — to this country on the other side of the world from Old Blighty.

For my readers elsewhere, I always find it embarrassing – very embarrassing – to tell them that our country still has a head of state shared with another country – a country whose flag we also share on ours – and based on an hereditary monarchy. Saying it out loud makes it seem far-fetched, inexplicable, impossible — but there you are.

Until 1972, we retained the system of British honours as well – likely lads (mostly) would troop off to Buckingham Palace to bend the knee to Liz Windsor and be anointed on the shoulders with a sword and told to “arise Sir Barry”. Less generous donors to the Australian Liberal Party would receive the even more anachronistic 'Member of the British Empire' — yes, the one John Lennon sent back.

Then, in 1972, Gough Whitlam swept away this embarrassing colonial cringe like he swept away so much else. He introduced a system of Australian orders for Australians, decided on by an independent committee. It worked well to reward a good mix of Australians from all walks of life who had done well.

But this was always hated by the upper classes, who saw anything Australian as, well, second class; who desired, above all – as they have for 200 years – recognition by the Mother Country. Who were pierced with arrows of envy as they saw the British nobs, their blood brothers and sisters, continue to march down the red carpet and bow or curtsey to their ruler — the apex of the class pyramid.

The announcement of the reversion to the British system came out of the blue (tie).

There was immediate Twitterrage, followed immediately after by people saying hang on, this is a diversion, means little, they are trying to take your attention away from the substantive and much more important things they are doing to Truth, Justice, and the Australian way of life. And indeed there was much truth in that suggestion.

Except that this, in turn, missed something much more important about this renewed love affair with the Jerusalem, in that green and pleasant class-ridden land.

Tony Abbott made part of it explicit — the Australian honours would continue for eminent people, but the new knights and dames would be “pre-eminent” people. A class above, as it were, the common hordes; the cultural cringe given legislative expression.

But there is more.

A while ago Attorney-General George Brandis dropped in on the deliberations of the Australian honours committee. Discussions secret of course, but clearly he wasn’t there for the vegemite sandwiches.

These people don’t miss a trick.

Oh, they know that having the media onside, playing with electoral laws (voter ID and the like, just like the Republicans in the US), smashing unions, undermining parliament and so on are all important in keeping them elected while they transfer even more of the wealth of the country from the poor to the rich.

But you also need to fundamentally alter culture — as important, if not more important, for long term neoconservative rule than the rest. Hence the attacks on the public broadcaster and the support of right wing shock jocks, hence the determination to change the school curriculum to one in which only Liberal rule seems natural, hence the removal of racial discrimination laws, because a country in which racism can thrive is one in which neoconservative politics can thrive.

Which brings us to awards and honours.

There is much media and public interest in who gets awards. And much symbolism. Awards to ordinary people doing public service – to scientists, artists, writers, unionists, carers, teachers – say much about Australian values; influence public perceptions of the good life; reflect, in concrete form, the old Australian mythology about mateship and egalitarianism and a fair go for all and lack of respect for authority. Reflect, in fact, all the values that don’t see people, in a polling booth, put a number one against a candidate with a blue tie and blue blood and a belief that they are born to rule.

So this must be changed.

Awards must be again aimed at neoconservative values and occupations — business, sport, right-wing politics, business, military, charity, old family, and so on. Follow the money, in fact.

So, nudge nudge wink wink to the committee, until such time as it can be packed with right-thinkers and, in the meantime, bring back British awards so that people with the Right Stuff – their kind of people – can be properly labelled, as they once were. And the public, reading the news of awards on the front page of News Ltd papers, or seeing it on the cowed public broadcaster, will be once again taught who the best people are, the people of value, people of calibre, the high class people. The kind of person you should aim to be by attending the right schools. The people you tug a forelock to, the people you must vote for.

The class war is over, won.

Now for the medals to the victors.

You can read more by David Horton on The Watermelon Blog or follow him on Twitter@watermelon_man. 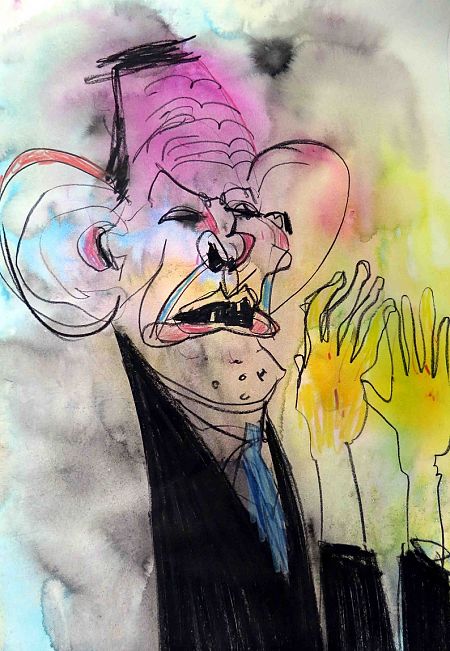