Towards a true democracy with the Apolitical Party

Australia has a flawed democracy. Our two party system does not give citizens a true choice — and the people know it.

In October 2014, Professor AJ Brown of Griffith University updated his comprehensive Australian Constitutional Values Survey, in which he asked respondents (among other things):

'How well do you think democracy works in Australia today?'

With regard to overall attitudes to the federal system, 84% of the total respondents had a negative view of the present system, in practice or in principle.

Put simply, empirical evidence demonstrates that citizens are not happy with the current state of democracy in Australia. Anecdotal evidence suggests citizens feel a sense of disempowerment when it comes to having some say and control in their lives.

The current discourse offered by party leaders suggests they are not primarily citizen centric — not concerned with how the citizen thinks or communicates and are detached from society. In effect, they do not represent their electorates.

In addition, the recent behaviours of some leaders indicate they may be detached from reality. Pope Francis stated recently that "corruption is like bad breath". You don’t know when you have it. Interviews and reports in the media about some leaders indicate that Pope Francis’s words are very close to the truth in the Australian political landscape.

So where does all this leave citizens? How can we break this deadlock of political and democratic mediocrity?

In his November 2011 article Towards a true democracy with the Australian Independents, IA editor (and co-author of this article) David Donovan advocated the injection of an "anti-party" to help heal Australia's ailing body politic.

Towards a true democracy with the Australian Independents https://t.co/To68kcQSQH @IndependentAus

In this article, Donovan summarised the main problem:

Our system is set up so that we elect politicians to represent the interests of our community or state. Unfortunately, almost all our politicians come from one of two major political parties — one claiming to represent “workers” and the other tending towards “business” interests.

Because of conditioning – and other factors – people almost always automatically vote for one of these two parties so that one of them becomes the government. And because MPs almost always vote as a bloc, along party lines, the governing party is essentially the only one that can ever get any legislation passed through Parliament, and has only its members in the executive, thus establishing a “partiocracy” that exists until it can be broken at the next election.

The article was one of a series Donovan has written on the subject (including Political parties deliver village idiots not village elders; Australia’s barbaric judicial and political system and Reforming Australia’s system of democracy). In Towards a true democracy with the Australian Independents, he discussed how we, as citizens, can help break the stranglehold political parties have over our political system to establish a true representative democracy. He suggested this could be done through the formation of a party of independents — what we describe here as an "apolitical" party.

Apolitical, because party members will be elected purely to work for the interests of their electorates and the good of the nation — not that of a faceless corporate entity whose only interest is in gaining power. Apolitical Party representatives will not be constrained by a party ideology, philosophy or the commands of a distant party executive. They will not be told how to vote or how to act. The Party will exist merely to select the best candidates in each electorate – the "village elder" type – and to provide logistical and other support to help these candidates get elected.

On the final point, the way the electoral system is structured and the growing size of the Upper House ballot paper, endeavouring to get elected as an independent can be difficult to the point of impossibility. Creating an Apolitical Party assists those that would like to represent the citizens of their electorate without being caught up in the toxic miasma of a political party.

There will be a number of positives from this approach, including:

So, together, we can break this political deadlock; this sickness in the heart of our body politic. 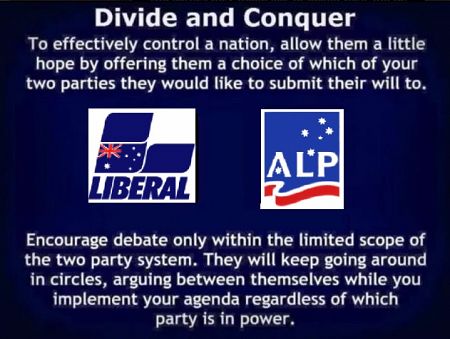 As David Donovan suggests, we need to inject it with an anti-party or — an Apolitical Party. One where the elected representatives within the Party represent their electorate or state. The Party will not have a philosophy or agenda — apart from a desire to truly represent electors and serve the greater good.

How can you become involved in the foundation of an Apolitical Party? You need to let us know. To start, we must have an Executive, a constitution, a party name and 500 signed up members who acknowledge and support the party constitution.

If you would like to be part of this party, please email apolitical@independentaustralia.net and let us know your thoughts and how you see yourself being involved.

Towards a true democracy with the Apolitical Party