RECENTLY, THE FEDERAL GOVERNMENT has been attempting to draw attention away from their shambles of a first year in office by putting security on the national agenda.

The politics of fear is a tried and true success story for the politically and socially stagnant. Any time the progressive side of politics is having a good run, you can be assured the stagnants will jump at every spook.

I’ll borrow an idea from the great George Carlin.

When you consider just how stupid the average person is, and then realise that half of everybody are even more stupid, it’s not difficult to see why conspiracy theories and fear of the unknown are such vote bringers. Stupid people are easily alarmed and there’s a lot of them.

This is the essence of Prime Minister Tony Abbott’s "Team Australia" comments. It's simple political symbolism designed to invoke a sense of patriotism.

Patriotism is great for making idiots unquestionably follow the will of the government; you’ll find some of the most interesting and wondrous tales of patriotism in Nazi literature and Axis history in World War II. Powerful stuff indeed.

Many of Abbott’s comments and undertones are fuelling the Team Australia bus down the express route through Muslim territory into Bigotry City. Lord Mayor Andrew Bolt – the name synonymous with racism – has been extremely vocal on this issue as one would expect, having written many rants on the local Sorbent in Melbourne.

Let’s not mince words. Team Australia (and pretty much everything Abbott and Bolt ever do) is about perpetuating Christianity (and Judaism) at the expense of Islam.

Now myself, I’m an atheist. A militant anti-theist, no less.

The best part about being an atheist is that you get such strong emotional responses to the absurdity of all religions.

For example, a Christian would find certain parts of Judaism and Islam completely off limits for ridicule, as all three religions are just different versions of the same untruth. However, when you regard them all with the same disdain and consider all their followers equally as schizophrenic and deluded, the blinders are lifted and the only thing left to see is the harm created and perpetuated by them.

So let’s start talking about these 'good Christians'.

The sheer ludicrousness of the Tony Abbott business advisor Maurice Newman’s recent comments about climate change science being a new form of 'religion' could only come from the demented, unhinged mind of a religious lunatic.

Such brazen contempt for the scientific method could only occur in a country such as Australia, where the Government consists purely of far-right stagnants.

Prime Minister Tony Abbott’s maiden speech to Parliament in 1994 began with a reference to the first Christian service in Australia.

He stated in his speech that

“... loss of faith is a social problem extending far beyond politics and far beyond Australia.”

He went on to claim that

“God and the ghosts of great men give [him] strength."

Treasurer Joe Hockey gave a speech in 2009 to the Sydney Institute titled 'In Defence of God', where he attempted to defer the blame for the influence religion has on people to do terrible things. He has repeatedly cited his Catholic faith as his reason for opposing socially progressive policies such as gay marriage.

Scott Morrison, the Minister for Immigration and Border Protection (note: only a stagnant government, with a constituency of mostly deluded idiots, could possibly elevate border protection to the highest level on the national agenda in a country surrounded by oceans) spoke very highly of himself and his Christian values in his maiden speech in 2008:

From my faith I derive the values of loving-kindness, justice and righteousness, to act with compassion and kindness, acknowledging our common humanity and to consider the welfare of others; to fight for a fair go for everyone to fulfil their human potential and to remove whatever unjust obstacles stand in their way, including diminishing their personal responsibility for their own wellbeing; and to do what is right, to respect the rule of law, the sanctity of human life and the moral integrity of marriage and the family. We must recognise an unchanging and absolute standard of what is good and what is evil.

Desmond Tutu put it this way:

‘... we expect Christians ... to be those who stand up for the truth, to stand up for justice, to stand on the side of the poor and the hungry, the homeless and the naked, and when that happens, then Christians will be trustworthy believable witnesses.’

Three obviously deeply religious men, they are probably so deluded that they don’t even realise their idol/prophet is likely to have had the same coloured skin as those children and families they have condemned in squalid detention centres for simply seeking a life away from the harm causes by religious groups at war.

The dangers of religious delusions are real — regardless of the religion that the person prescribes to. For such a prescription to occur, there must first be a suspension of logic and reason. If an adult claimed to hear voices, have visions, or speak to a sky fairy without attributing them to “god”, they would be promptly medicated or institutionalised for being a schizophrenic menace to society. Curiously, though, this is not the case with religion.

Stagnants love the word “terrorism” because of the connotations. It’s another great way to invoke fear and compliance.

But have you ever seen or heard the term used by a stagnant to describe a massacre committed by a white man?

Take this article from Andrew Bolt a few years ago as an example. No less than three times are acts committed by Muslims referred to as terrorism, yet not once does Bolt refer to the 2011 Norwegian shooting massacre by a white, right-wing extremist as a terrorist act.

In a classic act of Bolt obfuscation, he attempts to make the left-wing look bad because someone pointed out that the shooter was a Christian. Obviously, Bolt’s sensibilities are threatened by white Christian massacres.

It’s always amusing to watch someone with such a weak ideological foundation sit in their glass house throwing pebbles.

Highlighting the hypocrisy of Bolt’s “journalism” serves little purpose. His readership and viewership are idiots but at least he brings them together where we can keep an eye on them, as you would any group of people who lacked full development.

What brings Bolt, Abbott, Hockey and Morrison together is not religious extremism, or Islam, or even Team Australia, it is simply that it is not the right sort of religious extremism: the Christian sort — the one that brought us the Spanish Inquisition and the Crusades. 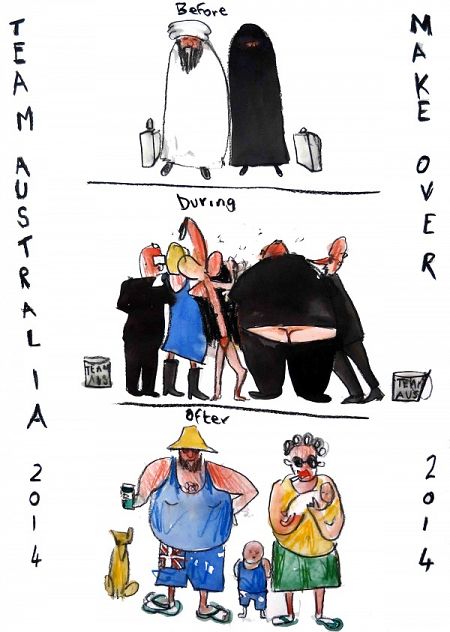