Women’s rights advocates attribute many of the problems facing women and girls in Burma to discriminatory cultural concepts of honour and shame that often make women responsible for the violence perpetrated towards them by men, writes Johanna Higgs.

"If a woman goes to the highest part of the pagoda where women are not allowed, then bad things will happen," explains one woman in Hpa An, the capital city of Kayin State in Myanmar (formerly known as Burma).

We’re sitting on the floor of her small home. A small light hangs from the roof casting a bright light across the room. It’s evening and two young children are sitting on the edge of the room doing their homework. We are discussing the situation of women’s rights in Burma.

"There will be floods and storms," she explains. "These are our traditions. They can’t be changed, Buddhism is very strong here in Burma."

Indeed traditions are very strong in Burma, a country where almost 90 per cent of the population is Buddhist. Throughout the country, sparkling golden pagodas decorate the green rolling hills and monks wrapped in bright orange robes illuminate the country’s strong Buddhist tradition.

Myanmar has also had a long political history fraught with violence. The long-running 60-year military dictatorship finally came to an end in 2011 with the election of Noble Peace Prize Laureate Aung San Su Kyi and the National League for Democracy (NLD) and while Myanmar is believed to be on a trajectory towards democracy, the country continues to face a number of challenges.

One of which includes violence and discrimination against women, which has been called by some human rights advocates as a silent emergency.

Officially, women and girls have equal rights in Myanmar. The Burmese Constitution guarantees all persons equal rights and protection before the law and does not discriminate against any Burmese citizen on the basis of sex.

However, the reality on the ground paints a different picture.

While there is little national data or statistics on violence against women in Burma, in 2008, the CEDAW (Committee on the Elimination of Discrimination against Women) Committee said that domestic and sexual violence are widespread in Myanmar. Statistics from UNFPA show that 70 per cent of women who have visited centres for women living in conflict-affected areas have experienced domestic violence. Sexual violence and harassment have also been reported to be a serious problem in Myanmar. 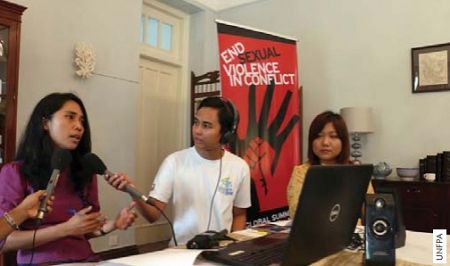 Women’s rights advocates attribute many of the problems facing women and girls in Myanmar, to discriminatory cultural concepts of honour and shame that often make women responsible for the violence perpetrated towards them by men.

Tin Tin Hlaing, the Coordinator of the Woman Initiative Group in Hpa An, for example, explains that if a woman is raped, she will most likely stay silent out of fear of being shamed.

"If a woman or a girl has been raped, then others will look down on her. No one will want to marry her, it’s like this throughout Burma. The problem is the culture. Most of the men in Burma only want to marry a virgin, so if she is raped, then she loses her value."

A university student from Hpa An Technological University agrees that women and girls are often discriminated against based on their sexual behaviour.

"If a woman is raped then she will feel a lot of shame, most of the time she won’t say anything. If a man rapes a woman then they’ll probably put him in prison but they wouldn’t shame him. They’ll blame the woman and say it was her clothes that made him do it."

Win Thiri Shwe, another student from Hpa An university, agrees that a woman would stay quiet if she was raped.

"The parents will say that honour is more important."

"It's not fair," agreed all of the women.

Violence against women in Myanmar is worsened by a weak legal system that is rife with corruption and misogyny, which makes it difficult for women to report violence because they believe that they won’t be supported. As a result, the majority of cases of violence go unreported.

"If she’s poor and has been raped by someone with more money than her, then she won’t be able to get justice. Most women will just stay quiet."

Myanmar is also one of a number of countries throughout the world where women may be forced to marry their rapist as a way of avoiding shame.

Paniton Phumbanyang, a legal officer at the NGO Lighthouse in Mae Sot, Thailand, reports that there have been many cases of women in the Burmese communities being forced to marry their rapists.

"Often the rapist has power in the family and in the community so often they think that if they give money to the family and get the girl to live with the rapist, then it will be good for her."

"Forcing a woman to marry her rapist is about culture," said Soontree Panyasawang, also a legal officer at Lighthouse. "The idea is that if a woman gets raped she won’t be able to find a husband, so she has to marry her rapist as a way of restoring her honour. It’s about showing extreme power over women."

Whilst such cultural values that promote violence and discrimination against women and girls are widespread throughout Burma, not all women agree that they are acceptable. For Shoon, Htin and Shwe, the young university students in Hpa An, they all said that they wanted to see changes in their culture. They all agreed that there should be more freedom for women and discriminatory cultural practices, such as forcing women to marry their rapists, should not be allowed.

Hlaing also agreed that she wants to see change in the cultural attitudes that perpetuate violence and discrimination against women and girls in Burma. Along with the Women’s Initiate Group, they are actively trying to do this.

"We are trying to educate women because educated women can earn their own money and not be abused by men because she can stand up by herself. We are also trying to empower women in Parliament and to improve women’s rights. Now women have a chance to be leaders. We need to empower the women of Burma."